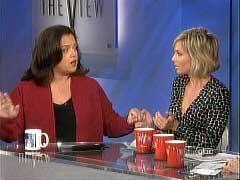 Bill O'Reilly was on The View today to discuss his new book Culture Warrior and, although there weren't fireworks, he and co-host Rosie O'Donnell got into a heated exchange about the war in Iraq. O'Reilly pressed O'Donnell with the question of whether she wanted the US to win in Iraq. Rosie refused to answer. She said she doesn't think it's possible.

On Late Edition with Wolf Blitzer today, Howard Dean said that he had been watching UN ambassador "Josh Bolton" on all the morning shows talking tough about the UN resolution on North Korea that the Chinese have already said they're not going to fully enforce and he said it shows that the Bush administration is "toothless" when it comes to national security.

Huffington: 'So What' If Saddam Persecuted Kurds

Putting aside the fact the Arianna Huffington dubiously implied on tonight's Factor that Bill Buckley and Chris Shays agree with John Murtha about a strategy for Iraq, what was frankly unbelievable was her ignorance and abject indifference towards the plight of the Kurds under Saddam Hussein. Huffington argued that the Kurds were free before we invaded Iraq, that their situation has not changed "one iota" since the

I'm not going to waste my time fisking Keith Olbermann's rant against President Bush on tonight's Countdown, but the gist of tonight's "Special Comment" was basically that President Bush has used 9/11 to drive a wedge between Americans, bring the country into an unjust war, and should be impeached.

Armitage Says He 'Screwed Up,' Alludes That Plame Was Not Covert

In an exclusive interview with David Martin on last night's CBS Evening News, Richard Armitage, for the first time, spoke publicly about his role in the Valerie Plame affair.

Couric Starts with Whimper Rather than Bang

I just watched Katie Couric's debut as the anchor of the CBS Evening News and it was, much to my surprise, not very different than it was when Bob Shieffer was helming. I expected at least a couple radical stylistic changes that would set the CBS Evening News apart from it's competitors on NBC and ABC and shake things up a little. But there was nothing new. All in all, Couric's debut was, well, ordinary.

Norah O'Donnell, Roger Simon, and Evan Thomas all seemed to agree on tonight's "Hardball" that there's no way that President Bush actually read The Stranger by Albert Camus and three Shakespeare plays as he claimed in an interview with Brian Williams yesterday. In other words, all together now, "Bush is an idiot." The originality of the criticism of President Bush continues to baffle my mind as I'm sure it does yours as well.

I don't really expect David Letterman to challenge his political guests and, apparently, neither does Nancy Pelosi. Appearing on the Late Show on Tuesday, Pelosi got away with rhetorical murder implying that George Bush wants to "phase out" Social Security altogether, Democrats really want to secure our borders, the military barely has any combat ready units, and terrorists don't really care about killing people, they just want to instill fear and thus, George Bush is playing right into their hands.

On tonight's Hardball, Chris Matthews pretty much allowed Howard Dean to slam Sen. George Allen without challenging him on his assertions. Asked about Allen, Dean said that he served with Allen while they were both Governors and that Allen "doesn't belong in public service." Dean also said that Allen "always shooting from the hip, he never thinks through what he means, and he caters to the wrong instincts in people" of which the "macaca" incident is supposedly proof.

At a White House press conference this morning, veteran reporter Helen Thomas once again--as Tony Snow famously said--presented "the Hezbollah view" and asked the President why he gives Israel "a pass" and only focuses on Hezbollah's rocket attac

On tonight's Hardball, Rep. John Murtha claimed that Marines in Iraq stormed a house and intentionally killed innocent women and children in response to the murder of a fellow Marine. According to Chris Matthews, the Marine Corps is currently investigating this incident.

Albright: Kim Jong Il Is "Not A Nut"

On today's Your World with Neil Cavuto, former Secretary of State Madeleine Albright spoke out on behalf of North Korean despot Kim Jong Il, saying he was "rational" and "not a nut."

You can view the video here.

It seems to me that those that are in such an uproar over the leak of Valerie Plame's name and claim that it had a negative impact on our national security would be hesitant, to say the least, about disclosing further information about Plame--especially information that pertains to what she was working on while at the CIA. But apparently, if that particular information is potentially damaging for the Bush administration, it's a different story.

In the wake of his gig at The White House Correspondents Dinner, Steven Colbert scored a profile on tonight's 60 Minutes.

You can view the video here.

Here's how the segment began:

Cynthia "fists of fury" McKinney is in trouble again:

The flap-plagued congresswoman, who has been in the media spotlight since she scuffled with a Capitol Hill police officer last month, was caught bad-mouthing a senior staffer Saturday.

There is no doubt that the leak of classified information concerning possible CIA prisons in Europe by CIA analyst Mary McCarthy has harmed U.S. national security and put our relationships with European allies on the line. Regardless of these facts, however, on today's This Week with George Stephanopoulos, Sen. John Kerry said he was "glad" McCarthy "told the truth."

On the 35th anniversary of his famous "Genghis Khan" testimony before the Senate, John Kerry has a piece on The Huffington Post today reflecting on his actions then and his feelings about the war in Iraq now.

Last night, Rev. Jesse Jackson appeared on The Situation with Tucker Carlson to discuss the Duke lacrosse team rape allegations. Specifically, Jackson's RainbowPUSH Coalition has decided to offer the accuser in the case free college tuition--regardless of whether her accusations prove to be true. As usual, Jackson is shamelessly injecting himself into the "hot" race-related case of the day for sake of his own publicity.