Geoffrey Dickens is the Deputy Research Director at the Media Research Center.

Chip Reid: "In a blistering attack DeLay called Earle, who is a Democrat a partisan fanatic."

[DeLay: "This is one of the weakest, most baseless indictments in, in American history. It's a sham and Mr. Earle knows it."]

On this morning's Today Katie Couric and Tim Russert looked like NFL linebackers diving for a loose ball as they piled on Bush from so many different directions. First up was the gas price angle:

At the top of the Today show Katie Couric attempted a guilt by association jab at Bush when she was teased upcoming stories: "But first this is the President's seventh, seventh trip to the hurricane zone and the former oilman is getting a real firsthand look at the devastation that's there."

The "oilman" reference set up the David Gregory piece on Katrina cleanup bids where he implied companies with ties to the administration were getting sweetheart deals: 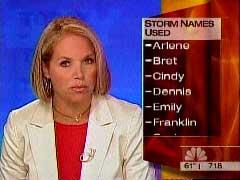 You knew it was coming. The Hurricane Katrina inspired global warming stories. Well at the top of this morning's Today show Matt Lauer invoked one of the media's favorite boogeymen:

Matt Lauer: "Then why are there so many hurricanes this year and is global warming to blame? We'll take a closer look at that."

Over the weekend on his syndicated show Chris Matthews compared Bush's performance during Katrina to Jimmy Carter's infamous 'malaise' speech in 1979 and NPR's Ed Gordon cribbed from Jon Stewart when he proclaimed Katrina to be Bush's Monica.  Matthews also suggested Katrina was an opportunity to make good on reparations. All the while Newsweek's Howard Fineman and the New York Times openly questioned Bush's leadership qualities and how it will affect his legacy.

Chris Matthews opened the show with his Carter comparison:

As Mark Finklestein noted in his earlier post Today can't seem to stay away from the same old themes.

Matt Lauer opened this morning's Today show first with Ophelia news but quickly got to Bush's falling poll numbers: "Good morning the storm that won't leave. Hurricane Ophelia is battering the North Carolina coast for a second straight day. Damage control. President Bush heads back to the Gulf Coast for a primetime address. Can he turn around those plunging poll numbers?"

Katie Couric brought on presidential historian Michael Beschloss to ask if Katrina will damage Bush's legacy. At the top of the show at 7:00 am Couric teased the upcoming segment: "Will this storm hurt President Bush's ability to accomplish his second term agenda and what impact will it have on his legacy? We'll talk with a top historian about that."

At 7:12 am Couric sat down with Beschloss in studio and opened with the following questions:

On to promote her book Talking Back, NBC's Andrea Mitchell offered a mea culpa on pre-war reporting and asked to recall her favorite interviews called Fidel Castro, "engaging" and Bill Clinton, "fun."

At 8:44 am Katie Couric began the interview asking Mitchell about her start in the business and how it has changed.

Couric: "Well you know obviously a lot has changed in the business since you started and you've been at NBC since 1978, right? Andrea how has, how has newsgathering changed? I guess the technology..."

Today's pushing of Bush's low poll numbers continued at 7:14 am when Katie Couric opened the political analysis segment with Tim Russert: "And now to the President's trip, back to the hurricane zone amid approval ratings that have sunk to an all-time low. Tim Russert is NBC's Washington bureau chief and moderator of Meet the Press. Tim, good morning."

This morning Today show viewers woke up to the following from Katie Couric: "Good morning. Up close and personal. With his approval ratings at an all-time low President Bush gets set to take his first ground tour of New Orleans." Co-host David Gregory, subbing for Matt Lauer then piped in: Katie the President is making his third trip this morning to the hurricane zone but it's really it's first detailed look at New Orleans. He, of course, has taken a major political hit through all of this."

Hugo Chavez: Strongman With A Heart of Gold

If you only got your news about Hugo Chavez from the Today show you could only assume that he's a sweetheart of a guy. To date Today show has yet to fully report on, shall we say, Chavez's bad side. On this morning's Today at 8:11 am, Natalie Morales offered no context in her anchor brief about Reverend Jesse Jackson's trip to Venezuela.

On this morning's Today show NBC's Matt Lauer pondered if anti-war activist Cindy Sheehan had caused a shift in President Bush's rhetoric and then threw the words of RINO Sen. Chuck Hagel in Dan Bartlett's face. Lauer also showed impatience when it came to setting a timetable for U.S. troop withdrawal but at the same time worried that the administration might be rushing things with their deadlines on the Iraqi people.

Lauer opened Today at 7:00am with this teaser:

MSNBC's David Gregory took umbrage with criticism of the media’s coverage of Cindy Sheehan on last night's Hardball at around 7:53pm. The following is a brief exchange from a segment that featured talk show host Melanie Morgan and Democratic strategist Hilary Rosen:

Gregory: "Melanie, let me, let me begin with you. Does Cindy Sheehan have something important to say?"

Melanie Morgan: "I think that Cindy Sheehan believes that she has something very important to say and she has the right to say whatever it is she wants to say. But that doesn`t mean because the mainstream media has portrayed her as a very sympathetic, lone grieving mother, that actually represents the case. In fact..."

Gregory: "Well, hang on one second. Hang on. Let me just, I can`t let all these mainstream media attacks go by. How has the media done that? I will grant that you there`s a news vacuum in August and she`s become a national figure, when perhaps, another part of the year, she may not have. But, I mean, let`s not get so far away from this process that we don`t say that this is a grieving parent who lost a son in, in the war. So, I mean, you just assume that the media is trying to prop her up?"

Gregory: "Isn`t it true, isn`t it true that the White House and even the President`s brother, the Governor of Florida, have discouraged you from entering this race?"

No bias directly from Al Roker this morning but he did let a guest's guffaw-inducing remark pass without comment. Esquire's Fashion Director Nick Sullivan was on to promote his magazine's Second Annual Best Dressed List. At approximately 9:40am this morning Roker asked Sullivan about one of the winners, Bill Clinton:

Al Roker: "When it comes to fashion what can we learn from somebody like, like Bill Clinton?"

On last night's Hardball on MSNBC, Chris Matthews did his best to keep morale down here on the home front when he brought on anti-war parents of a fallen soldier and asserted American lives were being "wasted" on Iraq like "pouring water into a sand hole." The following is just some of the exchange. Read on for more.

MATTHEWS: Let me ask you, Mr. Schroeder, why do you think we`re in this war? What do you think is the real reason for this war in Iraq?

PAUL SCHROEDER: Well I really don`t know why. I could guess, which might be unfair. But I would guess it has to do with oil. It has to do with deposing a dictator that we used to love and came to hate.

On this morning's Today show both Katie Couric and Andrea Mitchell took swipes at John Bolton. First at 7:04 am Andrea Mitchell aired footage of John Bolton getting booed as he got out of his car: "Well today is John Bolton's first full day on the job as UN ambassador. His challenge there will be to shake up the organization, as the President wants, without alienating anyone who can help him get the job done.