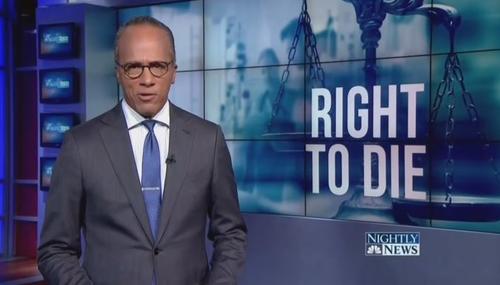 The Dangerous Advance on Assisted Suicide Ignored by the Media

Bobby Schindler
May 20th, 2017 1:20 PM
For-profit health insurance and government medical care mean one thing for patients: what was once ‘basic and ordinary’ is increasingly regulated, rationed, and often denied to those who need it most.

Colleen Raezler
March 22nd, 2010 5:52 PM
Seth MacFarlane marked the five-year-anniversary of Terri Schiavo's court-ordered death by staging a preschool musical about it in his crass FOX cartoon, "Family Guy."   MacFarlane denied Schiavo human dignity in the March 21 episode by referring to her in lyrics sung by cartoon preschoolers as "the most expensive plant you'll ever see" and a "vegetable," and noted "her mashed potato brains…

Tom Blumer
August 30th, 2009 9:29 AM
Robert Schindler, father of Terri Schindler Schiavo, has passed away. Condolences to his courageous family and friends. Associated Press writer Kelli Kennedy's coverage of Mr. Schindler's death, and her recounting of the Terri Schiavo story, is a mixed bag. On the one hand, she writes that "the feeding tube that had nourished her for years was removed according to her husband's wishes." I would…