Are You "Mainstream" Media If You Loved the Gay-Cowboy Flick?

New York Times writer John Leland reviews the growing phenomenon of Christian film criticism -- and how it now both evaluates the artistic and moral content. While it's nice to see the Times notice and even publicize conservative cultural efforts, Leland still employs the notion that the permissive liberal critics represent the "mainstream" of the media.

This year’s Christmas season has been marked by a pitched battle sparked by John Gibson’s book "The War on Christmas." The trend is hot enough that liberals are taking umbrage at the idea that Christians like the word "Christmas" and want to tell America’s most massive retailers that the last few weeks of the year are not centered on some winter festival without religious significance.

Media Prefer "Holiday(s)" to "Christmas" in Shopping and Layoff Stories

By Tom Blumer | December 22, 2005 9:34 AM EST
This is the second update (third installment) of a series that began just before Thanksgiving looking at how the words "Christmas" and "holiday(s)" are being used. I have sensed a couple of tendencies over the years and wanted to see if my suspicions were accurate this Christmas season, and did Google News searches on November 23, December 7, and this morning to investigate. Here are this morning's results (Dec. 22, 9AM ET): 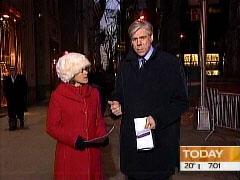 On Tuesday morning, the network morning shows all began with full stories on the New York City transit strike (no doubt involving dozens of struggling network employees). As I remarked today to Mark Finkelstein on his strike blog post, the New York-based media has an annoying tendency to elevate itself into the center of the news universe on local issues. (Put  the same event in San Francisco or Seattle, and the national media would barel

Montgomery Gentry are too blue collar for blue America.

At least that's the impression you would get reading Bill Friskics-Warren's review of the country duo's latest album, a "greatest hits" entitled Something To Be Proud Of.

"Staunch blue-collar populists" like Montgomery Gentry, worries the reviewer, root themselves in nostalgia for a time before "among other cultural advances, the women's and the the civil rights movements."

It's nothing to do with political bias, but I think PC Magazine columnist John Dvorak's latest column makes an interesting allegation: that the technology media favor Apple products over Windows-based ones. Here's an excerpt:

With 90 percent of the mainstream writers being Mac users, what would you expect? The top columnists in the news and business magazines fit this model too. The technology writers fit this model. The tech writers and tech columnists for the New York Times, the Wall Street Journal, Newsweek, and Fortune are all Mac users. I could list them by name, but I'd hate to leave one out. Maybe I'll blog them by name. I could list 50. Readers should thus not be surprised by the overcoverage of Apple Computer. Every time Steve Jobs sneezes there is a collective chorus of "Gesundheit" from tech writers pounding away on their Macs. [...]

What's bad for Microsoft is that the bias against it is subtle—kind of like any sort of media bias, whether religious or political. As one critic once said regarding the supposed left-wing slant of the daily news media, "It's not what they write, it's what they write ABOUT that matters." Story selection. Microsoft can roll out a dozen cool products, and the media goes ga-ga over the video iPod—a rather late-to-market Apple product.

Is Dvorak right or wrong? Please keep the flames to a minimum.