On Tuesday’s CBS Evening News, even after Katie Couric introduced a story about Israel’s election which will determine the next prime minister as being "too close to call," correspondent Richard Roth’s report spent more time focusing on the popularity of center-left Kadima party candidate Tzipi Livni – whom the report linked to Barack Obama – and featured positive soundbites of her supporters, but devoted little time to her conservative Likud party rival and former Prime Minister Benjamin Netanyahu, whom Roth briefly presented as a "hitch" to Livni becoming Israel's leader.

In her introduction, Couric labeled Netanyahu as a "hardline" candidate: "In Israel they're counting votes in an election that remains too close to call. Late tonight, hardline candidate Benjamin Netanyahu claimed victory, but exit polls show Foreign Minister Tzipi Livni in front. Despite that, Richard Roth tells us the process of choosing a new prime minister is far from over." 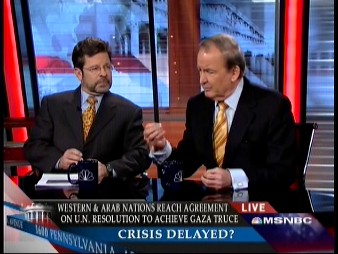 Like tonight. If Buchanan wants to criticize Israel's conduct of the current war, and its treatment of the Palestinians, so be it. But in doing so, is it really necessary to employ terms associated with the Nazis?  Appearing on "1600 Pennsylvania Avenue," Buchanan accused Israel of carrying out a "blitzkrieg" against Gaza and turning it into a "concentration camp."