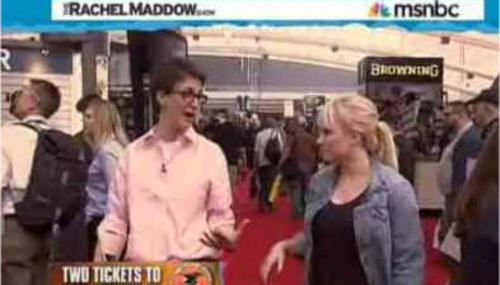 MSNBC's Bashir Asks Tancredo: 'Would You Have Preferred Obama's Death

Noel Sheppard
May 10th, 2011 6:17 PM
For the second time in less than 24 hours I find myself wondering how an American television "news" network could have assembled such a collection of ignoramuses. After MSNBC's Lawrence O'Donnell Monday evening claimed the Founding Fathers would have understood the need to raise the debt ceiling in order to protect the country's credit rating, Martin Bashir on Tuesday actually asked former…

Brad Wilmouth
February 15th, 2010 9:42 PM
On Monday’s Countdown show, MSNBC host Keith Olbermann delivered a "Special Comment" aimed at Tea Party activists in which, rather than rhetorically bludgeoning them with his usual name calling, he came across as trying to reason with Tea Partiers, appealing to them to admit to having racist motivations against President Obama as the Countdown host suggested that he felt sorry for them. Before a…

Brad Wilmouth
February 9th, 2010 9:34 PM
On Tuesday’s Countdown show, MSNBC host Keith Olbermann highlighted suggestions by former Republican Congressman Tom Tancredo that there should be civics literacy testing for registered voters made at the recent Tea Party convention, which Olbermann referred to as the "Tea Klux Klan," and painted Tea Party activists as wanting to deny minorities the right to vote using the tactics of the Jim Crow…

Noel Sheppard
February 6th, 2010 4:57 PM
Rachel Maddow on Friday referred to attendees of the National Tea Party convention in Nashville, Tennessee, as white-hooded racists.Continuing MSNBC's sad tradition, Maddow first attacked one of the convention's speakers: "The opening speech last night was given by failed presidential candidate, ex-congressman and professional anti-immigrant, Tom Tancredo who started the event off with a bang, a…

Matthew Balan
February 5th, 2010 4:55 PM
CNN’s Rick Sanchez failed to mention the party affiliation of former Baltimore Mayor Sheila Dixon on Friday’s Rick’s List program, but made every effort to identify former Congressman Tom Tancredo as a Republican. Sanchez ranked Tancredo higher on his “List You Don’t Want to Be On” for his remarks at the Tea Party Convention, despite Dixon’s conviction for illegally using donated gift cards for…

Mark Finkelstein
September 3rd, 2009 6:53 PM
Where has Ed Schultz been for the last eight years?  Obviously not out with his progressive peeps.  Otherwise he could not possibly have said what he did on his MSNBC show this evening:"I never saw anywhere in the news a Democrat carry a picture to any kind of a rally with a picture of Adolph Hitler putting them close to a characterization of President Bush.  Never saw that!"Oh, really?

Colleen Raezler
May 7th, 2009 12:00 PM
Chris Matthews apparently thinks the GOP is just one big bag of crazy. MSNBC's "Hardball" host challenged Rep. Mike Pence (R-Indiana) on the Republican Party's commitment to addressing climate change during the May 5 broadcast. Matthews claimed to Pence that the GOP is not passionate about environmentalism because, "There are people that really are against science in your party who really do…

Iowa GOP Debate: No to Questions on Immigration, Yes to Global Warming

Matthew Balan
December 12th, 2007 6:39 PM
Following up on Al Gore’s reception of the Nobel Peace Prize, Carolyn Washburn of the Des Moines Register asked the Republican candidates several questions on the issue of "global climate change" and related topics. At the beginning of the debate, Washburn stated "we won't talk a lot about issues like Iraq or immigration. They're important issues, no doubt, but Iowans say they know where the…

Mark Finkelstein
November 13th, 2007 5:55 PM
In the most florid criticism I can recall a network "correspondent" leveling at a major party presidential candidate, MSNBC's David Shuster has branded Rep. Tom Tancredo (R-Colo.) a border-control "fanatic." The editorializing came in the course of Shuster's report during today's 5 PM ET "Hardball," which included an update on the GOP primary.DAVID SHUSTER: No television commercial in Iowa is…

Matthew Sheffield
July 27th, 2007 3:44 PM
For various reasons, the majority of the Republican presidential campaigns have said they are not going to participate in a CNN debate co-sponsored with the Google-owned YouTube.com.Despite the fact that the Democrats' YouTube debate featured left-wing questions far out of proportion to questions from the right (see NB's prior coverage of the debate here), Republican activist Patrick Ruffini is…