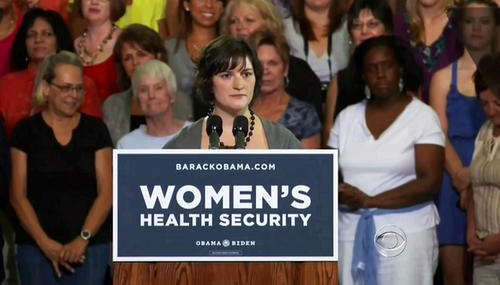 Jeff Poor
August 29th, 2009 7:42 AM
It's no secret the print newspaper industry is struggling. It's become all too common to hear that papers, like the Christian Science Monitor or the Seattle Post-Intelligencer, have ceased publishing a print edition and gone completely online. Former Secretary of State Madeleine Albright addressed this challenge and its impact on a government at the Aspen Institute's Forum on Communications and…

Matthew Balan
May 12th, 2008 1:50 PM
Christiane Amanpour interviewed former Secretary of State Madeleine Albright, famous for her October 2000 meeting with North Korean dictator Kim "He’s Not a Nut" Jong Il, as part of her "Notes from North Korea" program, which aired on Saturday and Sunday evenings. During the segment, the CNN senior international correspondent failed to note how her husband, James Rubin, worked…

Mark Finkelstein
February 26th, 2008 5:28 PM
What is it with these Hillary surrogates putting themselves in the limelight? Bill has famously turned the focus on himself, in effect giving Hillary's concession speech on a recent losing night and more recently exhorting people to elect "me." Today it was Madeleine Albright's turn. Speaking with Wolf Blitzer on this afternoon's Situation Room ostensibly for purposes of promoting…

Jeff Poor
January 20th, 2008 10:00 PM
Former Secretary of State Madeleine Albright isn’t impressed with the blow-by-blow horse race coverage of the primary season and blames the media.Albright revealed that to an audience January 19 at a Borders bookstore in Tysons Corner, Va., outside of Washington, D.C., to promote her new book “Memo to the President Elect: How We Can Restore America's Reputation and Leadership.”She said the media…

Mark Finkelstein
September 12th, 2007 8:03 AM
Warning to Bush administration officials: when being interviewed by Meredith Vieira, be prepared to make your point in 7-10 seconds, or risk being rudely caught off by the "Today" co-anchor.Twice in the course of her interview of Condoleezza Rice this morning, Vieira distemperately interrupted just seconds after the Secretary of State began responding to her host's question.View video…