Since Ron Reagan, son of former President Ronald Reagan, would probably be the first to admit his political view are widely divergent from his father's it seems strange that he would put words in the Gipper's mouth about current events.

However, the younger Reagan spoke for his father on HLN's Jan. 26 "The Joy Behar Show." Host Joy Behar asked Reagan what his father would have thought about the modern tea party movement.

"What would your father say about these tea partiers Ron, do you think?" Behar asked. 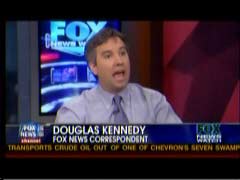 DOUGLAS KENNEDY: You know, just tell them to leave the swastikas home and the pictures of Hitler, and the, you know, they might gain a little more popularity.

KENNEDY: Yeah, but there's anti-Semitism and-

Panel member Judy Miller then jumped in and predicted that the Tea Party movement would help liberals by splitting the Republican party, prompting Kennedy to divulge some over-the-top wishful thinking:

Who says the media are monolithic in their thinking?

Yesterday we informed you of the media's serial misuse of an Obama-as-Hitler poster from esoteric left-winger Lyndon LaRouche's website, as outlets like NBC (on their Nightly News and Meet the Press), CNN and MSNBC all ascribed the poster to sentiments roiled up by talk radio host Rush Limbaugh specifically and conservatives generally.

We were entertained by the fact that all of these highly trained, keen-eyed journalists missed the words "LaRouchePAC.com" - in fairly large type - printed at the bottom of every one of the placards they used for their little reporting projects.

Well apparently CBS hasn't yet learned the lesson we had hoped to impart.  In fact, last night they did the other networks one worse.

For the words "LaRouchPAC.com" are prominently visible three times (screen captures below the fold) on two different Obama-as-Hitler posters during reporter Ben Tracy's segment, yet that doesn't stop him from blaming it on right-wingers.

As the second Obama-as-Hitler poster is shown, with LaRouchePAC.com clearly visible front and center, Tracy offers up: