The fallout from ClimateGate (link is to the NewsBusters tag), the name eventually given to the scandal resulting from the unauthorized posting of over 1,000 emails and dozens of documents obtained from University of East Anglia’s Climate Research Unit (CRU) in the UK, goes back a full six months to November of last year.

On November 20, Australia's Andrew Bolt crisply described the contents of the aforementioned items as providing substantial evidence of: "Conspiracy, collusion in exaggerating warming data, possibly illegal destruction of embarrassing information, organised resistance to disclosure, manipulation of data, private admissions of flaws in their public claims and much more."

Six long months later, as the American Thinker's Marc Sheppard observed, both the New York Times and Newsweek have recognized the fallout while still not conceding the argument. The Times does so in an article by Elisabeth Rosenthal about crumbling public support in Great Britain and elsewhere, while Newsweek's Stefan Thiel addresses "The backlash against climate science."

If you needed any more assurance the growing ClimateGate scandal is far more significant than America's media has been portraying, you got it Tuesday night from Comedy Central's Jon Stewart.

Somewhat surprisingly, "The Daily Show" host in his opening sketch tore apart the scientists involved in sending the obtained e-mail messages for showing "a clear effort to raise fears about global warming, and hide evidence against it."

Stewart even mocked the man responsible for spreading more fear on this subject than anyone on the planet:

Even more concerning to Robinson was that these scientists "seem to be trying to squelch dissent" from anyone that disagrees with them.

"The fact is that climate science is fiendishly hard because of the enormous number of variables that interact in ways no one fully understands," he wrote. "Scientists should welcome contrarian views from respected colleagues, not try to squelch them. They should admit what they don't know."

As you can see, Robinson was by no means trying to downplay the significance of this scandal:

ClimateGate Scientists Cited in Report to White House and Congress

Scientists involved in the growing ClimateGate scandal were cited in an October climate change report prepared for the White House and Congress.

As such, its contents not only impact future and current legislation involving global warming, but also how tax dollars are spent to research and address it.

As NewsBusters reported Friday, hacked e-mail messages to and from folks with direct access to the United Nations' Intergovernmental Panel on Climate Change show a concerted effort on the part of these powerful scientists to manipulate temperature data in order to exaggerate average global temperatures.

As Beck pointed out Monday, those involved also conspired to prevent viewpoints counter to their own from getting published in scientific journals or becoming part of IPCC reports.

"Think about that next time you hear about, oh, 'the consensus,' and 'the science is settled,' and Al Gore is bragging about the peer reviewed journals" (video embedded below the fold with transcript, h/t Anthony Watts via Bob Ferguson): 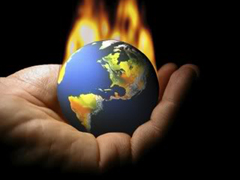