VIDEO Colbert Quips to Jones: Did You Need ‘Exorcist’ to Clean Out Sessions's Office?

If you want to understand what the Republican in the White House is thinking or doing, the best person you can turn to is a liberal Democrat. At least, that’s what Stephen Colbert, host of The Late Show on CBS, seemed to believe on Wednesday night. While talking with Alabama Senator Doug Jones -- who narrowly defeated Republican Roy Moore in a special election last December -- Colbert was particularly interested in two topics: whether President Trump creates an atmosphere that leads to violence and if the Democratic official had to bring in an exorcist when he moved into the office of Republican former Attorney General Jeff Sessions.

Not to Worry, Chris Hayes Chirpily Reassures, US Not 'In Hock' to China

If $1.1 trillion owned by Americans to China is no big deal, as MSNBC weekend host Chris Hayes would have you believe, at what point does it become one -- five trillion? Ten? Ever?

On Monday’s The O’Reilly Factor on FNC, during the show’s regular "Reality Check" segment, host Bill O’Reilly highlighted the double standard exhibited by President Barack Obama and other prominent Democrats in the way they reacted so strongly to former Republican Senator Trent Lott’s praise of former Senator Strom Thurmond at his birthday celebration in 2002, and the President's recent more forgiving words about Senate Majority Leader Harry Reid’s "Negro dialect" remark. O’Reilly quoted Obama’s unforgiving statement from 2002 regarding Lott, and then showed his recent statement giving Reid a pass. The FNC host also showed quotes of Democratic Senators Mary Landrieu and Debbie Stabenow from the Lott episode and noted their current unwillingness to comment on Reid.

Below is a transcript of the relevant portion of the Monday, January 11, The O’Reilly Factor on FNC:

It's official -- Bush and Cheney are as evil as al Qaeda. Or so Sen. Debbie Stabenow, Michigan Democrat, wants you to believe.

Chrysler just declared bankruptcy and GM may follow suit, Michigan's jobless rate remains worst in the nation, and its residents flee their state in droves.

What better time to create what Stabenow calls a "9/12 commission," modeled after the 9/11 commission that investigated the worst terrorist attack in American history. 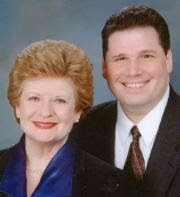 “Did Senator Debbie Stabenow (D-MI) really believe she could get away with calling for conservative talk radio censorship without revealing her husband's past ties to its troubled liberal counterpart?” the Radio Equalizer's Brian Maloney asked in a Friday night posting. “One day after telling libtalker Bill Press she was interested in pushing Senate hearings into the issue of regulating talk radio content, that's the jaw-dropping conclusion we must make.”

Maloney provided a rundown of “the Stabenow-Athans connection to 'progressive' talk radio” as he listed a “connect-the-dots recap....between her stance and the longstanding ties of Athans to the fledgling libtalk format.” Specifically:

- Athans first found a role in "progressive" talk radio back in 2004 as CEO of Democracy Radio, which preceded Air America and whose programming (Ed Schultz and Stephanie Miller) was ultimately absorbed by Jones Radio Networks (now part of Dial Global).

UPDATE: We have been reminded that Senator Stabenow's husband, Thomas Athans, is the co-founder of the liberal TalkUSA Radio network and is now the Executive Vice-President of liberal Air America.  Liberal talk radio has of course failed miserably every time it has been tried, all the while watching it's conservative counterpart's success soar.

Which might lead one to believe that Senator Stabenow, in addition to her zealous will to slam the fist of government down upon her opponents, has some business skin in the game as well.  If you can't beat 'em, censor 'em.

Michael Calderone in today's Politico reports on the latest liberal politician -- Michigan Democratic Senator Debbie Stabenow -- openly touting their intent to silence their talk radio opposition with a reinstitution of the Fairness Doctrine.

Senator Stabenow was speaking on the air with liberal talk radio host Bill Press and to his eleven listeners nationwide. She insisted that she "think(s) it’s absolutely time to pass a standard" and indicated she had "already had some discussions with colleagues" about Fairness "Standard" hearings and that she "feel(s) like that’s gonna happen. Yep."