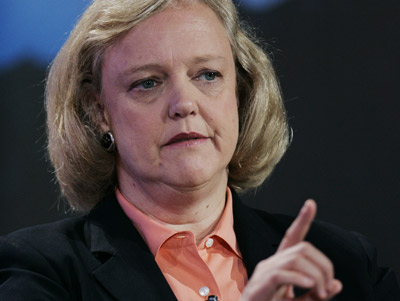 As the Democrat-loving media pile on California Republican gubernatorial candidate Meg Whitman over the illegal alien status of her former housekeeper, a strange thing happened at the New York Times Friday: columnist David Brooks published a positive piece about the former eBay CEO.

In fact, "The Austerity Caucus" never mentioned this new scandal that has most mainstream media members doing backflips.

Instead, Brooks presented a surprisingly even portrait of an extremely intelligent woman always ready to spout off facts about an issue with lightning speed:

Schultz Sorry About Christie Cracks? Says OK To Call Him 'Fat Slob,' Too

This column has twice—here and here—taken the un-svelte Schultz to task for his hypocrisy in making repeated fat jokes at the expense of Chris Christie, culminating in calling the NJ guv a "fat slob."  Media Bistro has reported [h/t Clerical Gal] that MSNBC prez Phil Griffin reprimanded Schutltz for his crude comment.

Apparently by way of non-apology apology, on his MSNBC show this evening, Ed admitted that he too was fat and would understand if others also considered him a "fat slob." Media Bistro has reported

I began to suspect something was afoot early in the show. On the one hand, Schultz launched into yet another long diatribe against Christie.  After taking numerous solo shots at the NJ guv, Schultz brought in a NJ teacher of the year, who was happy to be described as "strongly against Gov. Christie." The pair proceeded to rake Christie over the coals, paying scant attention to the brutal budgetary problems facing the Garden State that have forced Christie to make reforms.

But—in stark contrast with previous shows—the fat jokes had demonstrably disappeared.  And sure enough, in the tease for a subsequent segment, Schultz said "I admit that I'm fat."  Then came this show-closer . .  .

It's not just the most recent example, as described by NewsBusters' Mark Finkelstein, of a hefty Schultz maligning New Jersey governor Chris Christie as a "cold-hearted fat slob."

Weeks earlier, back on Sept. 1, Schultz said this on MSNBC's "The Ed Show" about criticism he'd received from fans of Glenn Beck (hat tip to Pam Key at The Blaze for embedded video) --

Open Thread: Christie to Obama: 'You Have to Talk to People Like Adults'

What a concept. The New Jersey Governor offered that and other bits of advice to the President over the weekend: 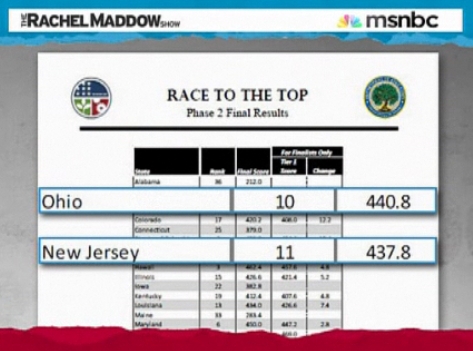 Rachel Maddow on Wednesday mocked the math skills of New Jersey Governor Chris Christie only seconds before she made the exact same arithmetic mistake she bashed him for.

In a short segment about the state of New Jersey losing some education funding as a result of errors made during the application process, the MSNBC host placed all the blame on the new Republican governor.

To put a fine point on what Maddow claimed was Christie's incompetence, she played a video of the Governor on MSNBC's "Morning Joe" earlier in the day misstating the number of points Ohio edged out New Jersey for this award.

Hysterically, when the clip ended, Maddow made the very same subtraction error (video follows with transcript and commentary):

Of All People: Schultz Slams Chris Christie With Fat Jokes

Of all people, Ed Schultz spent an entire segment this evening going after Chris Christie . . . about his girth.

I counted no fewer than seven separate barbs that Schultz directed Christie's way over his weight.  He began with a photo of the NJ Governor with the graphic "Battle of the Bulge."  It got heavier from there.

Video: Chris Christie Says He Will Take On Pension Reform Next

Just before he left for his vacation, New Jersey's conservative Republican governor Chris Christie announced his next reform initiative. That initiative is pension reform.

Lauer to Chris Christie: Are You Worried That Taking On NJ Unions and Teachers Will 'Haunt' You?

Republican New Jersey Governor Chris Christie appeared on Wednesday's Today show and deftly handled all of Matt Lauer's pointed questions from whether or not he was worried about "taking on" the "sacred cows" of unions and teachers, if he will support Barack Obama's small business legislation, and even if the governor's criticism of Snooki and The Situation was good for Jersey Shore tourism. On taking on the "sacred cows" Christie told the Today co-anchor "We're treating the people of New Jersey like adults." And when pressed by Lauer if he'll support the President's legislation that, as Lauer put it, "would help small business" Christie clarified: "What I'm in favor of is trying to lower taxes and lower regulation on small businesses so they can spend more of their own money creating jobs." [audio available here]

And finally, Christie and Lauer shared a laugh when the subject of MTV's reality show the Jersey Shore came up as Christie pointed out the cast was originally from New York and exclaimed: "Hey listen they're yours to begin with Matt. I have enough problems here. I mean an $11 billion deficit I gotta take Snooki and The Situation also? C'mon! So much a man can take, Matt!"

The following is the complete interview as it was aired on the July 28 Today show:

A New Jersey man who lives out of his van appeared at a town hall in Roxbury, New Jersey, to voice his support for Governor Chris Christie (R-N.J.) and his policies. He says they will provide people like him the best opportunities to improve their situations.

"If you don't think this is a screwy system, I don't know what is!"