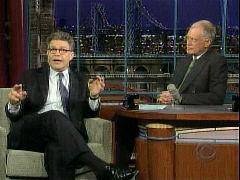 In his first appearance on the Late Show with David Letterman since “joking” on the October 21 show (NewsBusters item with video) about how Lewis "Scooter" Libby and Karl Rove “are going to be executed” because “outing a CIA agent is treason,” and President Bush is at risk too, Al Franken on Tuesday's program scolded Vice President Dick Cheney for not visiting the hospital room of his accidental shooting victim, Harry Whittington. In his usual mocking tone meant to come across as humorous, but which reflects a serious commentary, Franken, who briefly impersonated Cheney as a drunk, contended that Cheney was “drunk and couldn't show up at the hospital” or “he's an amazing jerk.” Third option: “Or, of course, both." Franken soon reiterated that “the idea that it's very common to shoot someone in the face, it's not unless you're, you know, you're drunk....Or he's just a big jerk." (Trancript follows.)

The Air America radio talk show host began his appearance by correcting Letterman's January 3 assertion to FNC's Bill O'Reilly that “about 60 percent of what you say is crap.” Franken insisted that 100 percent of what O'Reilly says is “crap.” He ended his session by confirming that he has moved back to Minnesota and is taking a “serious” look at running for the U.S. Senate.

The MRC's Brad Wilmouth corrected the closed-captioning against the video from the top of Franken's second segment on the March 14 Late Show with David Letterman:

David Letterman: "Al Franken. We were talking about George Bush's approval rating. Now, I don't know. Is 34 really too low even for a second-term President?"

Franken: "Do you mind if I just take an informal survey with the audience, and you've got to, it's, we're going to do this by applause. And you have to be absolutely honest."

Franken, to the Ed Sullivan Theater audience: "Right. [laughter] Okay. How many, okay, absolute honest, by applause now, how many here have accidentally shot a friend in the face?" [laughter]

Franken: "Okay, well, but no one else, right, except for the horn section?"

Franken: "Okay, now, I want to ask another question."

Franken: "Okay, how many here, if you shot a friend in the face, would go to the hospital, either in the ambulance or in one of the bullet-proof cars that the Secret Service has to see if your friend was okay? [applause] So either he was drunk and couldn't show up at the hospital -- [does drunk impersonation] 'I'm sorry, Harry' -- You know, they can't do that."

Letterman: "You don't want to do that."

Franken: "Or he's an amazing jerk. Really? Right? [applause] Or, of course, both." [laughter]

Letterman: "Did it concern you, the suggestion of a cover-up or a delay in releasing the information or how the information was eventually released to the press, to the public?"

Franken: "He was drunk. [laughter] I mean, you know, it's funny, I mean, you know, guys, when they hunt, I did a movie called Stewart Saves His Family. Anybody here see it? [applause] Wow! Anyway, that's, they're [referring to the audience] lying, they're lying. Anyway, in it-"

Letterman: "The horn section saw it."

Franken: "In it, I have a hunting accident, same thing, someone gets drunk and shoots someone in a hunting thing. This is very, very common."

Franken: "Sadly. And, I mean, the idea that it's very common to shoot someone in the face, it's not unless you're, you know, you're drunk."

Letterman: "Right. And at the time, as everyone pointed out-"

Letterman: "-this is the, as I realized it, as I understand it, the second vice presidential shooting in the history of that position."

Franken: "That was a long time ago."

Letterman: "Yes. And that was, he killed-"

Franken: "That was a duel."

Franken: "That was deliberate."