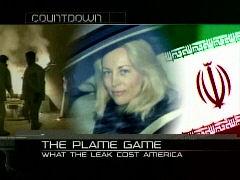 On Tuesday's Countdown show, MSNBC's Keith Olbermann attacked the Bush administration over the leak of Valerie Plame's identity as a CIA agent, implying that the President has "done more to help terrorists and rogue states than hurt them," as he linked Plame's work on WMD to the current standoff with Iran. But Olbermann had previously not expressed worries about threats to national security from other leakers, instead referring to them as "whistleblowers," including those who leaked the CIA's use of secret prisons in Europe, and the existence of the controversial NSA spying program.

After connecting Plame's work at the CIA to Iran's efforts to advance its nuclear program, the Countdown host moved on to interview political analyst Lawrence O'Donnell. Olbermann raised the possibility that Democrats will argue that because of the Plame leak, the President has helped terrorists and rogue states: "The Democrats seem to have danced around Joe Wilson and Valerie Plame and kind of pointed at them and said, 'Oh boy, there they are. We don't want to say the President's done more to help terrorists and rogue states than hurt them, but look, there are Joe and Valerie.' Is the Iranian component something that might gird the Democratic candidates a little bit to be a little bit less tepid about this, to say, 'Look, the Republicans were more concerned with the President's reputation than anything else to a agree that they didn't realize they were losing one of their great assets in the battle against nukes in Iran?"

Below is a complete transcript of the relevant segment from the May 2 Countdown show:

Keith Olbermann, in opening teaser: "Which of these stories will you be talking about tomorrow? She wasn't just a CIA agent. She wasn't just a CIA agent specializing in WMD. She was a CIA agent specializing in WMD investigating nukes in Iran. Exactly what this country lost when Valerie Plame was outed to protect the President's back side. Exactly how often Jack Abramoff saw that. Well, saw the President or his officials. 200 times in the first 10 months of the administration alone. The White House visitor logs will be made public. Speaking of logs, 34, 32, 39. The latest poll numbers. His popularity 34, his handling of Iraq 32. Those preferring a Republican Congress, 39. Hike."

Olbermann, opening the show: "Good evening. The irony was already inescapable and infuriating. In the middle of a war that started over nonexistent weapons of mass destruction, the administration of President George W. Bush was willing to destroy the cover of a secret American agent on the trail of actual weapons of mass destruction in order to deflect criticism over how badly it had fouled up or puffed up its wobbly evidence about phony weapons of mass destruction. But in our fifth story on the Countdown tonight, we now know there was a further irony still contained within the surface story of Valerie Plame Wilson. She had been monitoring the chance that nuclear materials were moving into Iran. Intelligence sources telling our correspondent David Shuster that when Mrs. Wilson's career was ruined when the name of the undercover company for which she and other CIA officers worked was deliberately unmasked in Robert Novak's column, part of the administration's ability to track Iran's nuclear ambitions went out the window as well. Prosecution documents in the Libby case painting a picture of the White House so obsessed with undercutting administration critic Joe Wilson that officials never really considered how going after him might damage the CIA itself. The intelligence community split these days on whether Iran is close or not to developing a nuclear weapon. The CIA refusing to say anything about possible sources in Iran. But since the White House has declared Iran to be one of the nation's biggest threats, part of the so-called Axis of Evil, that means every scrap of intelligence about Iran's nuclear program is essential. Every piece of intelligence that has been compromised could be called irreplaceable. Political analyst Lawrence O'Donnell joins us now, executive producer of the West Wing, contributor to the HuffingtonPost.com, and an old friend of Countdown. Good to talk to you again, sir."

Olbermann: "Of course, this walks Vice President Cheney and Scooter Libby right back towards that edge of, 'If they didn't know what she was doing when all this happened, they should have,' correct? I mean, Iran was just a couple of steps down from Iraq on their interest scale?"

O'Donnell: "Yes. But what Valerie Plame did for a living seemed to be not an interest of theirs at all. They just saw this motivation. They just saw this frame in which to put Joe Wilson, and to put his revelations in his New York Times op ed piece. And they didn't seem to stop and think about, 'Who is she? What does she really do there? We'd better be careful about this.' It has the feel, Keith, of negligence as opposed to maliciousness. It has the feel that the Vice President and Libby and Rove did not know what she did. And one, you can also get the feeling that maybe they, these kinds of guys just thought, 'Well, it's a woman working at the CIA. How important can her work be?'"

Olbermann: "So the early line for the conclusion here is whoever did this and whoever was involved in the presumed conspiracy to get this out were more errors of omission than errors of commission?"

O'Donnell: "There's a little bit of 'gang that couldn't shoot straight' in this, Keith. The mistakes are so stupid and the box that they got themselves in with the investigation is so stupid that it's not the kind of stuff that people would be doing in the White House if they knew how close they were to the legal trip wires. And that, by the way, is why we haven't seen Fitzgerald bring a prosecution on the actual act of revealing Valerie Plame's identity. There's a criminal version of doing that, and Fitzgerald hasn't found it. Fitzgerald's own prosecution at this point shifted over to the perjury case that he's making against Scooter Libby, and that shift took place literally years ago in this investigation. So Fitzgerald hasn't made a criminal case against anyone for that revelation."

Olbermann: "Yeah. If he could get somebody on four counts of being dumb, there would have been indictments on this already in that regard, too."

O'Donnell: "I think that's what the Libby case is, Keith, at this point." 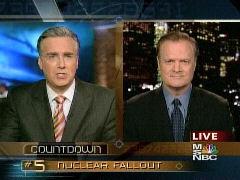 Olbermann: "Those who were plugged in politically have always been prepared for a revelation like this about Valerie Plame, but it's probably true that the understanding of the working parts of this case probably peters out as you move towards the less politically involved. Does this new element and the currency of it, Iran, does it make the picture clearer for people in general to any degree, do you think?"

O'Donnell: "I don't think it's going to rise this week to that kind of visibility, especially in the world of rising gas prices and all of the coverage that that's getting and all the political panic that's surrounding that. But it's one of those flavors that enters the story that I think over time will develop its own strength as an element in the story. And I think it's going to be one of the very strong ironies about it and one of the very powerful elements that harms the Bush administration in their own handling of this. The President did not activate all his own investigative powers within the White House when this leak developed. In fact, the White House did nothing about it until months later when the CIA complained about it and brought on the special prosecutor as a result. So the White House's own reaction to this leak was nothing when it occurred, and now as we see the full dimensions of what was at stake here, that doing nothing becomes one of actually the most shocking versions of doing nothing that this administration's been accused of from Katrina and all the other incidents in which it's been accused of being flat-footed and slow."

Olbermann: "Speaking of reactions, the pure politics of this, politically speaking, the Democrats seem to have danced around Joe Wilson and Valerie Plame and kind of pointed at them and said, 'Oh boy, there they are. We don't want to say the President's done more to help terrorists and rogue states than hurt them, but look, there are Joe and Valerie.' Is the Iranian component something that might gird the Democratic candidates a little bit to be a little bit less tepid about this, to say, 'Look, the Republicans were more concerned with the President's reputation than anything else to a degree that they didn't realize they were losing one of their great assets in the battle against nukes in Iran?"

O'Donnell: "Yeah. This will be framed as we enter the political season in the fall. This is where, the candidates who think that that kind of framing and that kind of argument will be helpful to them will use it. The candidates, the Democratic candidates who don't think it will be helpful will not use it. You know, Keith, one of the things that undermines the tension of this story actually is the public personas of Joe Wilson and Valerie Plame. Posing for pictures at Vanity Fair and then this weekend being at the White House Correspondents Dinner and having, you know, Colbert make a joke about them being there. There's something about that presence and that, that public presence that they now have, to some degree, which makes it actually feel, I think, to the general public that not much happened here. How serious can this revelation be if the woman involved, you know, is willing to pose for magazine pictures and go out in public and be in a nationally televised on C-SPAN event like the White House Correspondents Dinner? That's one of the odd qualities of this story."

Olbermann: "It would be different if she had a scar. Lawrence O'Donnell, political analyst, political strategist, also of the West Wing and the Huffington Post, of course, as always, sir, thanks for your time."