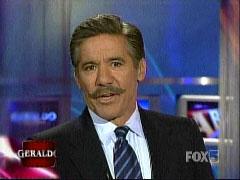 On the April 24th edition of Fox’s syndicated Geraldo At Large, Geraldo Rivera said the bright side of high gas prices is "it may cut down on global warming" and then went on to call oil company CEO’s "pirates," and backed a windfall tax on the companies as "a no-brainer."

The following is Rivera’s entire final commentary from the show:

Geraldo Rivera: "About the only good news is that it may cut down on global warming but exploding gas prices are hurting lots of people along the way."

[Man at gas station: "Gas prices just make you definitely want to take the train all the time."]

Rivera: "It's up nearly 25 cents a gallon in just the past two weeks. Self-serve regular now averaging $2.91. And in some cities like San Diego the spinning gauge topped out at over four bucks a gallon."

[George W. Bush: "When that price of gasoline goes up it hurts working people. It hurts our small businesses and it's a serious problem that we've gotta do something about."]

Rivera: "And every time you fill up your car remember this. According to a recent filing by the company, between last year's salary and bonuses, accumulated stock options and a lump sum payment just retired ExxonMobil CEO Lee Raymond is getting a farewell gift valued at nearly $400 million. Last year his company earned the biggest profit of any company ever, $36 billion."

[Sen. Arlen Specter: "ExxonMobil is a combination of two big companies and the Federal Trade Commission has permitted mergers and I think that has the inevitable consequence of driving the price up."]

Rivera: "Senate Judiciary committee chairman Arlen Specter says Congress should consider taxing the windfall profits being reaped by the oil companies which I think is a no-brainer. These guys aren't entrepreneurs they are pirates. Incidentally if you're interested in finding the cheapest prices in your neighborhood check out the Web there's a millions sites and think about trading in that SUV. So that's it for us, until next time thanks very much for watching."