Flashback: Whitewashing Hamas as a "Political and Social Welfare Organization" 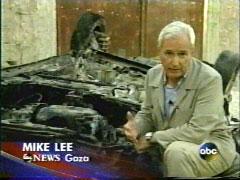 Just two and a half years ago -- after the September 11 attacks had supposedly made the U.S. a bit more sensitive to the plight of Israelis under constant pressure from terrorist groups -- ABC's World News Tonight benignly described the Palestinian terrorist group Hamas as “a political and social welfare organization with a military wing that has launched terror attacks against Israel.”

Now that Hamas has apparently won the Palestinian elections, will reporters stress their history of killing innocent civilians? On last night' World News Tonight, anchor Bob Woodruff wouldn't go so far as to brand Hamas as a terrorist group, calling them a "militant" group "which the U.S. calls a terrorist organization."

Lee asserted from Israel: “Abu Shanab was a senior member of Hamas, a political and social welfare organization with a military wing that has launched terror attacks against Israel. Shanab was not a declared military operative and had a reputation as a political moderate, but Israel said today that all Hamas leaders are responsible for terrorism.”

As for the “social welfare” aspect of Hamas, the State Department’s Patterns of Global Terrorism, mentions such a role only in how Hamas recruits its murderers:

Here’s how State’s report described Hamas: “Formed in late 1987 as an outgrowth of the Palestinian branch of the Muslim Brotherhood. Various HAMAS elements have used both political and violent means, including terrorism, to pursue the goal of establishing an Islamic Palestinian state in place of Israel. Loosely structured, with some elements working clandestinely and others working openly through mosques and social service institutions to recruit members, raise money, organize activities, and distribute propaganda. HAMAS’s strength is concentrated in the Gaza Strip and the West Bank. Also has engaged in peaceful political activity, such as running candidates in West Bank Chamber of Commerce elections.”