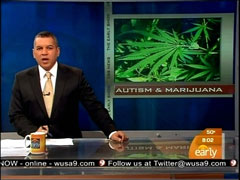 Continuing the push for medical marijuana, on Monday’s CBS Early Show co-host Russ Mitchell declared: “As more youngsters are being diagnosed with autism, there is a growing need for alternative treatments. One California mother says medical marijuana has made vast improvements in her autistic son.”

Correspondent Hattie Kauffman reported: “Joey is severely autistic, so uninterested in food he was wasting away....But Mieko [Joey’s mother] claims it all changed with marijuana brownies.” Meiko Perez argued: “They’re seeing Joey come out. He’s never made noises. We didn’t even know he could make noise until the first batch of brownies.”

At the end of the brief report, Kauffman noted mild criticism of the controversial treatment: “The American Academy of Pediatrics opposes legalization of marijuana, but supports more research.” She then concluded: “Though there’s absolutely no evidence Marijuana cures autism, this mom says it has improved her child’s life.” 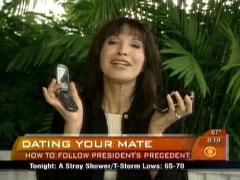 On Wednesday, the Early Show continued its obsession with the Obamas’ recent date nights as co-host Julie Chen exclaimed: "If Barack and Michelle Obama can find time for each other, why can’t you? We’re going to hear why it is a good idea to follow the President’s lead."

Earlier, co-host Maggie Rodriguez similarly declared: "We want to encourage everybody in America to bring back, or start, date night. Because if the Obamas can do it, so can we." Correspondent Hattie Kauffman later reported: "It took a couple of helicopters, a private jet, and a limo, but President Obama recently took the First Lady to dinner and a show in New York. Over the weekend, a rendevous in Paris. They may be the busiest couple in America, but the Obamas still manage to pull off date night."

Kauffman got reaction from one married couple: "The Larsens have been married 50 years and they still go out on dates. They say the Obamas are setting a good example." However, Kauffman did have some criticism: "Sure the Obamas will always have Paris, but have they set the bar too high?" Kauffman concluded her report by declaring: "Air Force One may not be available for your weekend retreat, but it's the time spent together that's priceless." 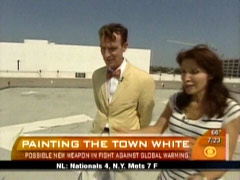 Kauffman explained: "In any given city, most rooftops are black. And that's the problem. The darker the surface, the more heat it retains...the lighter the surface, the better it is for the environment." Kauffman talked to Bill Nye, ‘The Science Guy,’ who further explained: "The building doesn't get as hot so you don't need to run the air conditioner nearly as long."

Later, Kauffman cited Obama Energy Secretary Steven Chu: "[he] says if all rooftops and roads in the world were made white it could combat global warming." A clip was played of Chu claiming: "That would be the equivalent as if you took off all the automobiles of the world for eleven years." Kauffman added: "Think of it this way, every year you would keep out of the atmosphere 2.4 billion tons of carbon dioxide or the emissions produced by 60 million cars. There’d be even more savings if roads and parking lots were not covered in black asphalt." Nye declared that asphalt was: "...absorbing more heat...squandering billions of tons of carbon dioxide every year."

Recent earthquake activity in Alaska provided “CBS Early Show” co-hosts with a ready-made metaphor for a segment on the personal lives of some of the those surrounding Alaska Governor Sarah Palin. But their quake turned out to be barely a ripple.

Hosts Harry Smith and Maggie Rodriguez couldn’t contain their smirks as they introduced the piece. “There's been an earthquake rumbling outside Anchorage, but there is some other rumblings, as well, near Wasilla,” Smith snickered. “Oh, indeed,” Rodriguez chimed in with her eyebrows raised. “Sarah Palin says that she is focused on one thing, governing Alaska. But it has been hard to dodge the negative headlines swirling around her friends and family. Some real doozies.”

Levi Johnston, Bristol Palin’s ex fiancée and father of Alaska Governor Sarah Palin’s grandson, was interviewed on the Tyra Banks show. Questioned by Banks, Johnston said “I’m pretty sure she [Gov. Palin] probably knew” he and Bristol were sexually active.” Then (perhaps momentarily forgetting that there was living proof to the contrary) he tried to maintain that the two had “always” practiced safe sex. After several prompts from Banks, he reluctantly admitted it was only “most of the time.” 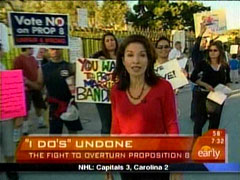 Following a Thursday one-sided report by correspondent John Blackstone, on Friday’s CBS Early Show, co-host Maggie Rodriguez continued to lament the passage of California’s Proposition 8, defining marriage as only between a man and a woman: "On Tuesday, voters in California approved Proposition 8, a ban on gay marriage. It was a stunning defeat for gays and lesbians who are now fighting back." Correspondent Hattie Kauffman reported: "Supporters of gay marriage targeted L.A.'s Mormon temple, protesting the $15 million the church poured into passing Proposition 8." She played a clip of those protesters chanting: "Shame on you! Shame on you! Shame on you!"

Following Kauffman’s report, Rodriguez interviewed ‘Star Trek’ actor George Takei and his partner Brad Altman, who were married in September and have made numerous Early Show appearances since the California Supreme Court allowed gay marriage. Rodriguez, who had interviewed the pair shortly after their marriage, asked: "I remember your jubilation when you talked about your wedding here on the program. You shared your wedding video and you shared your hope that other gay couples in California would continue to get the opportunity that you had. This ban says that they won't. George, the last time we spoke, you felt hopeful. Today, you feel?" Takei replied: "Well, we feel that our marriage is valid, that there's no language in Proposition 8 that says it's retroactive... This is a fundamental right, all-inclusive, as Supreme Court of California has ruled, and this is taking away that fundamental right. It's like saying, you know, you don't have a certain -- a certain group will be -- will have their freedom of speech taken away from them, just because they're red heads."

At the end of Wednesday’s CBS "Early Show" co-host Harry Smith introduced a segment on a new group of environmentally-friendly young professionals: "Earth Day, of course, was yesterday, but for many Earth Day is every day, especially for a growing number of Americans of means." Correspondent Priya David went on define this new demographic: "Scuppies, so interesting, that's what the people in this group are called. Scuppies, it's short for Socially Conscious Upwardly Mobile Person, and there are more of them out there than you may realize. They are the new yuppies. Young, upwardly mobile, friends of the Earth."

David further explained that: "The term, coined by financial planner Chuck Fallia, refers to green young people who love both money and mother nature." She then went on to contrast today’s well-meaning "scuppies" with the greedy "yuppies," or young urban professionals, of the 1980's:

DAVID: Today's scuppies aren't like the yuppies of the 1980s.

MICHAEL DOUGLAS: Greed, for lack of a better word, is good.

DAVID: Instead, they want to do good.

You know the media are saturated with political correctness when it becomes necessary to defend . And the October 9 CBS “The Early Show” was no exception.

LA Weekly’s Deadline Hollywood Daily reported Warner Bros. President of Production Jeff Robinov made the decree “We are no longer doing movies with women in the lead.”