The White House is amping up its vigilance in silencing its critics with the creation of a new communications position designed to respond to unfavorable online stories about the President.

Attacking critics is nothing new for the administration, and the creation of this position is only the latest effort to throw the considerable weight of the White House bully pulpit behind efforts to attack Obama's critics. For the president, this tactic began during the campaign and has continued to date.

Until now, though, the fight was mostly funded by the DNC or campaign teams, as is standard practice for the sort of oppositional approach this position seems poised to adopt. But as an official White House position, taxpayers are actually the ones footing the bill for Obama’s new attack dog.

During the 2008 campaign, much of the press succeeded in painting a portrait of Barack Obama that bore almost no resemblance to either the Chicago politician he was before, or the president he's been since. We were sold Hope and Change, but ended up with what Washington Examiner columnist David Freddoso decries as "Gangster Government" in a new book bearing that title.

Gangster government is "about governing without recognizing the legitimate limits of one's power," as Freddoso describes it. "It's about officials who use public office to make winners into losers and losers into winners; who bend, break and make the law to help their friends and punish their enemies."

Freddoso contends that the term describes Obama's administration better than any before it. The man cut his teeth in Chicago, the mecca of gangster government, by Freddoso's telling, and exported that brand of public policy - with the aid of a pair of complacent watchdogs in the news media and Congress - into the Oval Office.

Flashback: 35% of Democrats Think Bush Knew of 9/11 Attacks in Advance 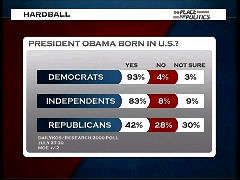 Certain MSNBC hosts have been fixated over using the “birthers” to discredit conservatives, highlighting a poll commissioned by the far-left Daily Kos site which found a majority of Republicans (58 percent) either believe Barack Obama wasn't born in the U.S. (28 percent) or are not sure he was (30 percent). Chris Matthews led Friday's Hardball with the beliefs of the GOP's “lunatic fringe” and “wack jobs,” but where was MSNBC two years ago ranting about the Democratic Party's “lunatic fringe” and “wack jobs” when a survey discovered a bigger majority of Democrats (61 percent) think or are not sure if President George W. Bush knew in advance of the 9/11 terrorist attacks?

Washington Examiner columnist/blogger David Freddoso pointed out a couple of hours earlier, during another MSNBC segment devoted to the Daily Kos poll (his post about his appearance), what Rasmussen Reports found. That poll released on May 4, 2007 determined:

Democrats in America are evenly divided on the question of whether George W. Bush knew about the 9/11 terrorist attacks in advance. Thirty-five percent (35%) of Democrats believe he did know, 39% say he did not know, and 26% are not sure.

On Tuesday’s Hannity and Colmes program top Obama spokesman Robert Gibbs displayed the latest example of the Democratic campaign attempting to whitewash their opponents. When co-host Sean Hannity asked him about Obama’s connections to William Ayers, Gibbs shot back, "Are you anti-Semitic?" He then changed the entire subject of the discussion to whether Hannity was anti-Semitic for recently interviewing Andy Martin, who in 2000, accused George W. Bush of using cocaine, has been a candidate for various offices in several states, and is accused by the Washington Post of starting the rumor that Obama is a Muslim.

This charge by Gibbs caused a three-plus minute back-and-forth argument in which the Obama spokesman continued to charge that Hannity was anti-Semitic, and also asked at one point, "Why am I not to believe that everyone who works for the network is anti-Semitic because Sean Hannity gave a platform to a man who thinks Jews are slimy?" The argument was finally stopped by co-host Alan Colmes, who defended Hannity as "not anti-Semitic" [see video at right; direct link to video here].

CNN Concerned Anti-Obama Book 'Might Catch on With Some Voters'

Never Again!  Not the Holocaust.  We're talking about the MSM's determination not to let Barack Obama be "Swiftboated." In successive segments today, CNN provided a perfect example of the phenomenon. First, a one-sided trashing of Obama Nation, the anti-Barack book by Jerome Corsi, who co-authored Unfit for Command: Swift Boat Veterans Speak Out Against John Kerry.  In the succeeding segment, anchor Suzanne Malveaux worried out loud to Paul Begala that Barack Obama might not be responding fast enough to attacks against him, thereby "falling into the same trap as John Kerry."

SUZANNE MALVEAUX: There's a new book out about Barack Obama, and it is not flattering. The facts are mixed with accusations about Obama that are misleading or just flat-out wrong. Yet despite all of this, there is concern that author's claims might catch on with some voters.  Our CNN's Jessica Yellin joining me now, and Jessica, the author even admits that there is an agenda here behind this book.