A desperate-sounding Chris Matthews, on Tuesday's Hardball, put out a call to a Republican, any Republican, to come on his airwaves to denounce Rush Limbaugh as a liar. At the top of the show the MSNBC host issued the following challenge:

CHRIS MATTHEWS: And out on a Limbaugh! We're issuing a challenge tonight and every night to elected Republicans. Come on Hardball please sir and madam and tell us you disagree with Rush on anything! Tell us you've had it with his distortions, his misrepresentations, his outright falsehoods. We invite you to tell us he's not the leader of the Republican Party. It's our standing offer. Come on Hardball and tell us Rush isn't telling the truth.

Later on in the program Matthews, in a segment full of cheap shots and out-of-context analysis, invited on Eric Burns from Media Matters and David Corn of Mother Jones to examine the conservative talk radio host's "ramblings," as Burns declared "most of what comes out of his mouth is a lie," and Corn implied Limbaugh was inciting violence against Obama as he decried the radio giant for being "full of untruths and lies and it's hateful...he's confirming perhaps the worst impulses that people might have, towards the Obama administration." [extended video clip here] [abbreviated audio available here] [extended audio clip here]

Throughout the show Matthews, repeatedly requested Republicans to come on his program to denounce Limbaugh as he charged: "I wonder if the Republican Party is not just in bed with Rush. They're under the covers."

The following teaser and full segment were aired on the May 11 edition of Hardball: 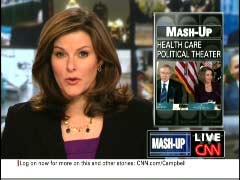 CNN, both on-air and on its website, highlighted how Democratic leaders and President Obama spoke more than twice as long as Republican leaders at Thursday's health care summit. CNN.com's Political Ticker on Thursday noted how Republicans "spoke for just 111 minutes, about 30 percent of the total speaking time." The statistic was also cited on Campbell Brown on Thursday and American Morning on Friday.

The network's Jeff Simon and Charles Riley put up a six-paragraph article on the lopsided figures on CNN.com at 7:12 pm Eastern time: "A CNN analysis of the meeting shows that Democrats - including President Obama, who helmed the meeting - were granted more than twice the amount of speaking time as Republicans. Democrats spoke for a total of 135 minutes while President Obama spoke for 122 minutes, for a total of 257 minutes. Republicans, meanwhile, spoke for just 111 minutes, about 30 percent of the total speaking time."

There's something about these big events that cause MSNBC "Hardball" host Chris Matthews to go off script and say something seemingly ridiculous.

Matthews has publicly admitted President Barack Obama has given him a thrill up his leg after a campaign speech in Feb. 2008, and uttered "oh God," earlier this year after an Obama address to Congress, prior to the Republican response from Louisiana Gov. Bobby Jindal earlier this year. And on Dec. 1, he referred to West Point as "the enemy camp" in coverage following a speech from Obama announcing his intentions to increase troops in Afghanistan. And, later that night - Matthews took a shot at former Vice President Dick Cheney (emphasis added).

"The president said tonight that we're fighting in Afghanistan because al Qaeda is in Pakistan," Matthews said. "Is that what this is all about? Is that why we're fighting and some are dying in Afghanistan? To deliver the message to the government over in Pakistan to fight harder against al Qaeda. It sounds more Rube Goldberg than ‘Remember the Alamo.' Also try tonight to workout whether the president's goals in Afghanistan are achievable. Are they? And of course, there's always Dick Cheney who jumped it from under his bridge to bite the president's ankle even before he made the speech tonight."

Michael Calderone at Politico reports that the White House press corps is evolving to the left in the Obama era.

Matthews: Does Palin Think McCain is the 'Anti-Christ?' 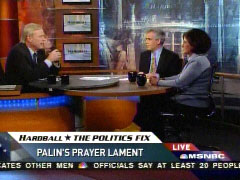 An offended Chris Matthews, on Thursday night's "Hardball," was so shocked by Sarah Palin's claim that there wasn't anybody to pray with on the McCain campaign, that he hurled multiple insults Palin's way, calling her, "a little scary," and asked if Palin thought McCain was, "the Anti-Christ?" Matthews was appalled by Palin's recent revelation that she had trouble finding someone to pray with before her vice presidential debate and the MSNBC host worried such talk about "The Deity in a political environment," wasn't "normal."

Matthews' guest panelists also joined in the fray as the Washington Post's Lois Romano declared, "I think it's bizarre and I think it's judgmental," and Mother Jones magazine's David Corn cackled it was "mean and catty." RNC chair Michael Steele was also knocked for a recent profession of faith, as Matthews blurted: "Why does everything sound like the '700 Club,' with this party now? I mean everything seems to be a religious discussion."

Matthews and his panel didn't just stop at insulting Palin's religious beliefs, they also belittled Palin for her hand gestures and attractiveness. Over video of Palin waving at a campaign rally Matthews ridiculed: "You know, doing that windshield wiper wave though is not serious. That's not a serious wave. I'm sorry that's not what you do when you want to lead the free world. That's, that's more like, 'I'm a celebrity and people like me.'

And just before that snide comment from Matthews, Romano and Corn dismissed Palin for her looks: 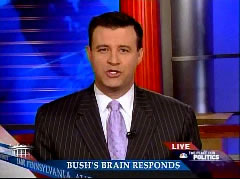 "1600 Pennsylvania Avenue" host David Shuster continued to obsess over and taunt Karl Rove on Tuesday's program, even taking the fight to Twitter. Shuster, who has named Rove a hypocrite three times so far in his daily "Hypocrisy Watch" segment, appeared gleeful that "Bush's Brain finally did respond via Twitter." The political operative told Shuster, through the social networking site, simply to "wait until the book. You're in there."

Shuster retorted on his Twitter page by sarcastically instructing Rove, "Next time, try defending yourself 'like a man,' - mano y mano as I've repeatedly invited you to do." It's odd that Shuster would expect Rove to come on the MSNBC program, considering that he has heaped nothing but invective on the former Bush aide.

As NewsBusters previously reported, Chris Matthews and Ari Fleischer had quite a debate Wednesday evening wherein the "Hardball" host acted like a shameless Democrat operative and the former White House press secretary behaved with grace and aplomb as he wiped the floor with his poorly-matched opponent.

Matthews must have realized how foolish he looked, for on Thursday he continued his debate with Fleischer, but curiously didn't invite Ari back to defend himself:

I didn`t catch something he said right at the end of his appearance just as I was thanking him for coming on. I didn`t hear it until I watched the 7:00 o`clock edition last night. But a lot of people caught it when it first aired and didn`t like it.

At issue was the following statement by Fleischer (video embedded below the fold along with full transcript):

On Wednesday night's "Hardball," Chris Matthews led a not-so-balanced panel of lefties that included Mother Jones's David Corn and Salon's Joan Walsh, in hammering Dick Cheney's concerns, relayed in an interview with Politico, about the Obama administration's softer stance in the war on terror. The "Hardball," host led the attack on Cheney as he charged the former Vice President: "Was wrong in a way that was lethal. 100,000 people dead including 4,000 Americans are dead, something like 15,000 wounded because he was wrong."

Walsh piped in: "We have a situation where it's vintage Dick Cheney. It's dark, it's dire, it's creepy, it's kooky, it's very scary, but there's absolutely no evidence. And so you're right to point to the fact that this is a man who's gotten everything wrong. There was no connection between the 9/11 hijackers and Saddam Hussein. There was, there were no weapons of mass destruction. We were not greeted by a mushroom cloud as the smoking gun. He got everything wrong, thousands are dead and now he's back."

And for his part Corn wondered: "How detached from reality is he?"

Then Matthews, parroting a line his NBC colleague Tom Brokaw made on Inauguration Day, remarked: "He does seem like a character out of 'Dr. Strangelove.'"

The following exchanges were aired on the February 4 edition of "Hardball":

Matthews: 'What's Wrong' with a 'Show Trial' or 'Witch Hunt' of Bush Officials?

"Why would a show trial or witchhunt be bad?" 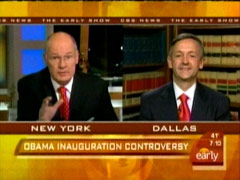 At the top of Friday’s CBS Early Show, co-host Harry Smith teased a segment on the controversy surrounding Barack Obama’s decision to have pastor Rick Warren deliver the invocation at the inauguration: "Barack Obama angers gay rights groups by choosing Rick Warren to give his inaugural invocation." Later Smith brought on Dr. Robert Jeffress of the First Baptist Church of Dallas and David Corn of the liberal Mother Jones magazine to debate the issue, declaring: "President-elect Barack Obama has ignited a firestorm of controversy by selecting conservative Pastor Rick Warren to give the invocation at his inauguration. Warren is an outspoken critic of gay marriage and that has angered many of Obama's liberal supporters."

Later, Smith turned to Jeffress and wondered why Warren would agree to speak at Obama’s inauguration. Jeffress replied: "But I want to say, to me, it's just unbelievable to think that because Rick Warren believes that marriage should be between a man and a woman, somehow that characterizes him as a hate-monger and makes him unfit to pray at the inauguration. I mean, this sounds like bizzaro world to me-" At that point, Smith interrupted: "Well, excuse me, excuse me though, this is a serious civil rights issue in this country."

Matthews Worries About Obama Cabinet: 'Why No Lefties?'

Looks like Chris Matthews is actually disappointed in Barack Obama, but only in the sense that he's worried Obama isn't moving to the left fast enough. Throughout Monday night's "Hardball," after reciting recent appointments like Robert Gates, Jim Jones and yes even Hillary Clinton, Matthews repeatedly asked his guests questions like: "What happened to the victory of change, and I hate to use the phrase, the Left? Who won this election?" and "Why do we have no lefties in this Cabinet?"

Matthews even invited on two "lefties," Tim Carpenter of Progressive Democrats of America and David Corn of The Nation, to blast Obama for not going left enough and offered them regular spots on his show to "Keep the guy [Obama] where he ought to be."

A little later in the program, Matthews had on Margaret Carlson of Bloomberg news and Roger Simon of the Politico and fretted about his perception that there weren't enough leftists in the cabinet: "Why no lefties? Why nobody that talks like Barack Obama talked when he got elected?"

The following exchanges occurred on the December 8, edition of "Harball":

Why am I not surprised?

I'm glad that Good Morning America covered the connection between John McCain and Rod Parsley, the Ohio megachurch pastor who has said it is the United States' historic mission to see the "false religion" of Islam "destroyed."

But did ABC News' top investigative reporter, Brian Ross, have to swipe the story from us?