President Barack Obama’s endorsement Friday night of building a mosque near Ground Zero has driven the establishment press corps to find nobility in pursuing conviction even in the face of public opposition, not something MSM journalists admired about the previous President, while suddenly becoming very concerned about protecting private property rights – all while hailing Obama’s “great global message.” [MP3 audio here.]

“I thought the speech Friday night was a model of political courage, in the sense that he said what he believed knowing that it was going to cost him,” hailed Washington Post Associate Editor David Ignatius on ABC’s This Week with Christiane Amanpour. Picking up on Matthew Dowd’s suggestion Obama was echoing George W. Bush’s “it’s my way or the highway” attitude, Chrystia Freeland, global editor-at-large for Reuters, argued:

Another way of talking about that is leadership, conviction, having your beliefs and not governing according to polls. And I think if you ask most Americans what kind of leader you want, if you ask people in the world what kind of leader do you want, you want someone who governs according to conviction....for American leaders to say in the face of, you know, some political pressure from their voters, to say actually we believe sufficiently strongly in diversity, in private property rights for our Muslim citizens, I think that's a great global message.

"It is still a very feudal, very Byzantine regulatory system," Freeland complained on the PBS News Hour with Jim Lehrer, referring to the Senate's approval of a financial regulations bill yesterday.

A radical policy, Freeland maintained, could have done away with the current "fractured" group of regulators and established a much stronger, more unified single regulator.

However, Freeland said the bill succeeds in tempering the rapid movement of capital. She did acknowledge that Main Street folks will have more trouble getting mortgages than they did in the past. "That's the price of having a safer financial system," she said.

Freeland's championing of the new regulations does not diminish some other aspects of the bill, which include no additional regulation of Fannie Mae and Freddie Mac, tougher times ahead for small businesses trying to procure loans from banks, and tough times for small banks themselves, who lack the resources of Wall Street to deal with the new regulations. 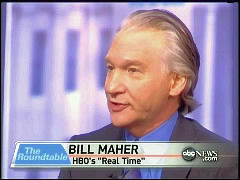 Comments on two Sunday shows reflected an emerging new liberal line of reasoning, which uses the lack of opposition to Arizona’s new immigration enforcement law, as a means to discredit conservatives and Tea Party activists as hypocrites and/or racists. HBO’s Bill Maher on ABC’s This Week:

Government intrusion, government power is something that really bothers conservatives, unless it's directed toward people who aren't white, you know, I mean it does seem like there’s some of that going on there.

Chrystia Freeland of Reuters on the McLaughlin Group:

What I think is really important to notice here is the hypocrisy, the intellectual hypocrisy because we have...a lot of the same people who are very exercised right now...about big government and pointing out the American tradition of liberty, of individual rights, are also the people who are on the side of allowing the government to intrude much more into individuals' lives on immigration. 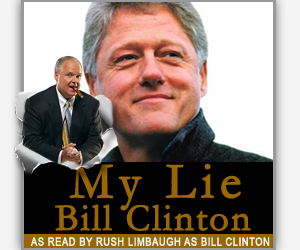 A truly extraordinary thing happened on CNN Sunday: a mainstream media representative actually took Rush Limbaugh's side in a dispute with Bill Clinton.

As readers are likely aware, the conservative talk radio host and the former President exchanged words last week over who was to blame for the Oklahoma City bombing in 1995.

I have to say, on this one I'm on Rush Limbaugh's side...I'm not accusing Rush Limbaugh of being guilty of too much balance, but I do think blaming the media is a very weak thing for politicians and businesspeople to do. And I think we in the media should really be pretty, pretty careful before we agree with the criticism.

Not surprisingly, Salon's Joan Walsh didn't agree, and once again found herself alone in her perilously liberal views as the cameras were rolling (video follows with transcript and commentary):

Good Morning America's Bill Weir and Reuters editor Chrystia Freeland on Saturday gushed over Obama administration talking points on the new unemployment numbers. After Weir talked about a White House-created graphic showing job losses slowing, Freeland unselfconsciously rhapsodized, "Well, I was going to say, what I think that first tells you is that [presidential adviser David] Axelrod is a really smart guy, because that is a beautiful graphic."

Continuing to tout how useful the show was being to the Obama administration, she added, "And I'm sure he's really, really happy to see it on TV." Perhaps wanting to spread the credit around, Weir complimented, "Might be [Obama adviser] David Plouffe who came up with that one, too."

Freeland couldn't get over the cleverness of this graphic, which featured the Obama logo, enthusing, "Okay! Okay. Both of you guys, well done." Now, it's one thing to repeat Democratic talking points, but to tout the brilliance of said talking points is quite another.

Financial Times Reporter: Is Next Year Too Soon to Address Deficit?

Only a liberal could imagine that addressing the federal deficit and creating jobs might be mutually exclusive. On MSNBC's Feb. 3 "Morning Joe," Chrystia Freeland of The Financial Times asked Sen. Debbie Stabenow, D-Mich., whether she agreed with President Obama's stated intention of addressing the deficit next year.

"Senator, we've also heard from the president that next year - in his budget for next year - he is going to be focusing on deficit reduction, and he thinks its gonna be time be worried about that," Freeland said. "Is that too soon? Are you worried that the president should really be focusing right now still on stimulating the economy?"

Matthews Calls Palin A 'Troglodyte' For Not Buying Global Warming

Did you know that if you don't believe man is responsible for global warming you're a prehistoric cavedweller completely unaware of what's going on in the world?

So said MSNBC's Chris Matthews during a discussion on Wednesday's "Hardball" when he referred to Sarah Palin and everybody else that doesn't agree with Nobel Laureate Al Gore's view of climate change as "troglodytes."

"She`s got to be smarter than this," argued Matthews despite complaining moments later about how the former governor gives autographs: "She doesn`t write the book, and then she scribbles some indecipherable sign on the book as a signature."

Sharing this lowly opinion of the former vice presidential candidate were the Washington Post's Eugene Robinson who called Palin's op-ed about climate change in his own paper Wednesday "a mess," and the Financial Times' Chrystia Freeland who said Palin's views on this subject were "radical" and "dangerous."

Add it all up and "Hardball" viewers were treated to quite a Palin hatefest (video embedded below the fold courtesy our friend at Story Balloon, partial transcript):

By Kyle Drennen | November 20, 2009 2:50 PM EST
Citing a Democratic congressman who recently proposed a no whining day, on Friday’s Morning Meeting on MSNBC, host Dylan Ratigan asked: “...unemployment, health care, a couple of wars, Americans got plenty to be frustrated about these days...But some people say stop the whining....Is ‘shut up and deal’ the new American mantra?”

Ratigan made that question the topic of discussion for the ‘Trend or Talker’ segment near the end of 9:00AM ET hour of the show with correspondent Contessa Brewer and Financial Times U.S. managing editor Chrystia Freeland. Ratigan explained: “...the congressman, by the name of Emmanuel Cleaver, wants to declare the day before Thanksgiving complaint-free Wednesday.” He wondered: “Worthy proposition?”

Brewer replied: “Yeah, absolutely. Here you get a two-fer. No complaints on Wednesday and Thursday gives you something to be grateful for.” Freeland enthusiastically agreed with the idea: “I think the no whining day is a fabulous idea....What they say in preschools, you get what you get and don’t get upset.”

Of all the things that might give you comfort in the wake of Nidal Malik Hasan's murderous rampage, where would you rate the news that the military's commitment to "diversity

On the 2009 debut of his HBO show Real Time on Friday night, Bill Maher proposed his new solution for the economic crisis: legalize marijuana. In an interview with Rep. Ron Paul, he lectured: "When FDR came into office in '33, one of the first things he did was repeal Prohibition. He said we can’t afford this any more."

Freeland: No Waterboarding—Even To Save Planeloads of People

The exquisite moral sensibilities of the MSM . . .

Would you waterboard an al Qaeda member for three minutes to get information to save the lives of nine passenger-loads of innocent civilians?  Chrystia Freeland wouldn't.  The US managing editor of the Financial Times made the stunning statement during the course of a classic Morning Joe dust-up today.  Joe Scarborough, with help from tag-team partner Pat Buchanan, went after Freeland on her opposition to waterboarding and similar interrogation techniques. At one point Scarborough called Freeland "sophomoric."  Later, the exasperated MJ host gave his guest some of the same treatment to which he'd recently been subjected by Zbigniew Brzezinski, telling Freeland "you have no idea what you're talking about."

Finally, under questioning from Buchanan, Freeland went so far as to disagree with the proposition that it would be moral to waterboard someone for three minutes to get information to foil a plot to simultaneously kill nine passenger planeloads of people.

Joe Scarborough and the rest of the Morning Joe crew actually had my sympathy this morning. Amidst all the infighting at MSNBC, including demands for Joe's head in Olbermann-friendly circles, one could sense that the panel was on its best behavior.  During the opening hour, a subdued David Shuster—who had openly fought with Joe just two days ago—was there, but just barely.  A conciliatory Scarborough could not have been more enthusiastic in his praise for yesterday's DNC proceedings, from Bill's speech to the historic fact of the nomination of an African-American.

But if my impulse is to cut the Morning Joe folks some slack today, I have to draw the line at the whopper Joe got off at 6:45 AM, in which he claimed that Biden's presence on the ticket will help reassure gun owners that Obama won't take their weapons.

Click on the image to the right to see what Joe had to say, then compare it with Biden's record on gun ownership.  As you'll see, the contrast couldn't be more stark.