NYT, CBS & The Independent All Mislead on Record Food Stamp Use

Many media outlets have hyped projected 2008 food stamp usage as a “record high,” but as FNC's Brit Hume pointed out Wednesday night in showcasing a particularly misleading take in The Independent in London, a higher percent of Americans were on food stamps “back in the Clinton years.” Hume showcased the London paper's Tuesday front page headline, “United States of America 2008: The Great Depression,” which asserted that 28 million on food stamps in the U.S. represents “the highest level since the program was introduced in the 1960's.” Hume noted:

But critics suggest, however, that that number is misleading since 28 million people would be just 9.2 percent of all Americans. Back in the Clinton years, food stamp distribution reached at an all-time high of almost 10 and a half percent in 1993 and 1994 and 10 percent in 1995.

The Independent matched Monday's front page New York Times article, “As Jobs Vanish and Prices Rise, Food Stamp Use Nears Record,” in which Erik Eckholm asserted “the number of Americans receiving food stamps is projected to reach 28 million in the coming year, the highest level since the aid program began in the 1960s...” Lifting that story, on Monday's CBS Evening News reporter Bill Whitaker ominously intoned: “With jobs declining and prices for basics -- food, fuel, medicine -- on the rise, more Americans are expected to turn to food stamps in the next year than at any time since the program began in the 1960s.”

Rescuing viewers from "solid recession talk," Menefee said that specifically network news reports already "have gone far beyond recession, they are already concerned about a depression."

"They're not tell-they're not allowing people on the networks to say ‘Hey, let's get this in perspective right now,' as you said we haven't had a quarter of negative growth yet."

Fox News: “Media ‘Talking Down’ the Economy to Get a Dem Elected?”

Just how obvious is it that the media's economic and business coverage is so negatively skewed that it has to be part of a political agenda in an election year?

Obvious enough for the folks at Fox News to do an entire segment Saturday morning asking the extraordinary question: "Media ‘Talking Down' the Economy to Get a Dem Elected?"

Despite my surprise seeing "Cavuto on Business" begin with such a question framed at the bottom of the screen, I was almost enraptured by the comments from Neil's guests which not only included regular assertions that this is clearly about getting a Democrat in the White House, but also that media are "committing a crime against the general public" by creating a self-fulfilling prophecy that will end up costing people their jobs in the long run.

More importantly, "if we have a serious recession, a great deal will lie at the media's feet."

By Mark Finkelstein | March 23, 2008 12:08 PM EDT
With Eliot Spitzer gone, Chuck Schumer moves to the head of the list of smugly self-righteous New York pols. So it was particularly satisfying to see Sen. Jon Kyl [R-AZ] put Schumer is his place on This Week with George Stephanopoulos today.

A guest with Kyl for purposes of discussing the economy, Schumer clearly came in with a game plan: to analogize President Bush to the man who presided over the beginning of the Great Depression: Herbert Hoover. After Schumer tried it twice, Kyl had had enough and unleashed a riposte as devastating as it was reasoned.

A recent AP story about 50-year-olds moving back into their parents homes because the economy is so bad is one of the best examples of taking anecdotal evidence and stretching it into a universal truth that I have seen for a while. Filled with the sadly common "many say" and all based on the tale of one person who moved back home at 52, the AP magically discerned a national trend. This is the sort of shoddy reporting that is geared for one thing and one thing only: to promulgate a political agenda.

AP business writer Emily Fredrix gives us the sensationally titled, "Last Hope in a Weak Economy? Mom and Dad," in which she nicely sums up her unsupported claim in the third paragraph.

Taking shelter with parents isn't uncommon for young people in their 20s, especially when the job market is poor. But now the slumping economy and the credit crunch are forcing some children to do so later in life -- even in middle age.

While discussing the collapse of investment bank Bear Stearns, grainy footage of panicked '30s bankers appeared onscreen as Golodryga intoned, "The problems are so massive that the Fed is taking measures not seen since the Great Depression..." And while President Bush was briefly highlighted, assuring Americans that the United States will rebound, Paul McCulley, the managing director of the investment company Pimco, continued the comparison to the worst economic crisis the United States ever faced. Referencing impending action by the Federal Reserve, he asserted, "...You could have the Fed with great intentions but still a downward spiral in property prices that would give you a modern day depression." For comparison's sake, during the Great Depression, almost 25 percent of Americans were unemployed.

Bloomberg's 'Net Worth' Report Doesn't Even Tell Us What It Is

.... for what I believe is a painfully obvious reason.

It is reports like the one written up by Shobhana Chandra at Bloomberg yesterday on household net worth that make you wonder if everyday US citizens will ever get the information needed to accurately evaluate what's going on in the economy without doing more digging than they have time for -- or that they should even have to do.

Chandra's writeup seemed to deliberately omit any and all context readers could have used to understand the significance of the information presented. She (based on this source, I'm assuming that Chandra is female -- if I'm wrong, please let me know) also sought out an "expert" to support a specious case that the reported results were masking a greater deterioration.

Here's how her report began:

ABC Hints Rich CEO 'Deeply Tanned' from Sunbathing, But May Be Italian Complexion? 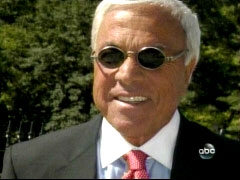 During a story suggesting that Angelo Mozilo, the former CEO of the mortgage company Countrywide, is unworthy of his millions of dollars and perhaps enjoys too much time lying in the sun, ABC's Dan Harris, possibly not picking up on the former CEO's Italian ethnicity which could be the source of his skin's dark complexion, remarked that Mozilo's "deeply tanned face" could become the "face of the mortgage mess." The story ran on Friday's World News

Economists "don't even agree that we're in a recession yet," Gainor said. "But then if you watch the network news shows, we're already up to eight times this year - that's once a week where they've made a comparison to the Great Depression." 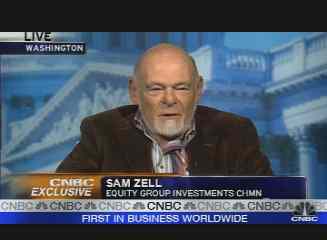 For years, NewsBusters and the Business and Media Institute have informed readers about how the press, since George W. Bush was first elected, have tried to create a self-fulfilling prophecy by misrepresenting economic data in as negative a way as possible.

This is likely the cause of the public's continued pessimism about economic conditions even as the economy has expanded for 25 consecutive quarters.

On Tuesday, in an interview on CNBC, Los Angeles Times and Chicago Tribune owner Sam Zell took this thinking a little further when he suggested to "Squawk Box" anchor Becky Quick that many of the economic problems facing the country today are caused by fear-mongering and politicking by Hillary Clinton and Barack Obama.