On to promote his new children's book Billy Crystal couldn't resist taking a shot at the President on this morning's Today show. Crystal, opening to an illustration of a grandfather in his book let this zinger fly: "So we try to make them, [the] guy look like an everyman but look at this, if you can get in close, doesn't he look like President Bush?"

Crystal: "Just telling this little baby you have a $9 trillion dollar debt you can't pay off. Isn't that nice?"

Carl Limbacher at Newsmax.com spotted the latest item from Barbara Streisand's "Truth Alert" (think of it as her own Media Matters).

Starters: Yesterday's illegal immigration rallies attracted a lot of media and blogger attention. Of course, since most of the media favors unchecked immigration of any kind, they have a tendency to cover up the more outrageous signs that protesters were sporting Monday. If you're looking for blog coverage of the protests, head over to Instapundit.com.

Which party will benefit from illegal immigration as it gains a higher profile in the national debate? The Washington Times thinks Democrats stand the most to gain. Ace of Spades agrees, arguing that the Dems' strategy of not offering policy alternatives pays off on at least this issue.

Media: Bob Schieffer and CBS News accused of racism by fired producer. "Schieffer has a reputation for bigotry," Raylena Fields alleges. He "frequently and publicly refers to a newsroom assistant as 'Brownie' due to the complexion of his skin." Fields also claims she saw the anchor address a black correspondent as "boy." In middle eastern media, Saudi television regularly allows anti-semitic and anti-American rhetoric on its government-owned airwaves. MEMRI exposes one of the more virulent ranters who compares American "neocons" (aka Jews) of being the "closest thing there is to Nazism." (ht LGF).

How did the media cover guns last week? Alphecca blog's Jeff Soyer answers that in his weekly roundup of press gun coverage. As the MRC’s Brent Baker reported, the broadcast network news programs focused much attention Monday on immigration issues and rallies. In an effort to demonstrate growing public sentiment in favor of giving such folks guest worker status, the “Evening News” presented data recently obtained from a CBS News poll on the subject. Unfortunately, CBS only shared the parts of the poll that seemed to support its own position on this issue while ignoring the results that didn’t (video link to follow). White House correspondent Jim Axelrod claimed: “According to a new CBS News poll, 74 percent of Americans favor allowing illegal immigrants to stay and work if they have been here at least five years, pay a fine and back taxes, speak English and don't have a criminal record. But even when you wipe away all those conditions, more Americans still favor allowing illegals to apply for work permits than oppose the idea.”

In addition, Axelrod concluded his piece by suggesting that it was conservatives that are blocking legislation that would make these protestors happy: “And despite the latest poll numbers, don't forget that in this town there is still a strong feeling among conservatives that the only nonnegotiables in immigration reform are tighter borders and stricter law enforcement. So this would hardly be the first group to demonstrate at the Mall and ultimately be disappointed.”

Yet, Axelrod and CBS chose not to include in this report other numbers from this poll suggesting that Americans are not only opposed to illegal immigration, but also think legal immigration is too high:

Air America Falls Off the Charts

WDOM-AM used to be a top country music station. Then it switched to Air America.

WUSY with its country format remains at the top of the local radio world in the latest ratings.

By Greg Sheffield | April 11, 2006 9:20 AM EDT
Jack Kelley has a good article about journalists who selectively choose when to recycle old news.

"A senior administration official confirmed for the first time on Sunday that President Bush had ordered the declassification of parts of a prewar intelligence report on Iraq in an effort to rebut critics who said the administration had exaggerated the nuclear threat posed by Saddam Hussein," reported David Sanger and David Johnston in the New York Times Monday.

End of the McCain Love Affair with Reporters?

Many media watchers predicted the press would turn on John McCain only after he got the Republican nomination and had to face a Democrat. Before the general election, he was expected to be coddled by the press as the sensible alternative to more right-wing Republican candidates. 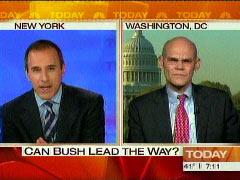 Imagine you're a news show host, and a former presidential adviser just claimed that the United States military is near to "a state of rebellion" against civilian authorities. Do you think you might have asked a follow-up question or two?

On the media beat Monday, New York Times reporter Lorne Manly (is that his real name?) wrote a story headlined "Before You Hit Send, Pause, Reflect," on the sad case of ABC weekend "Good Morning America" executive producer John Green, who was suspended for a month after the New York Post reported that he said former Secretary of State Madeleine Albright had "Jew shame." He was not suspended immediately when the Drudge Report displayed an e-mail from the 2004 presidential debates where he declared "Bush makes me sick" for his attacks on Kerry. 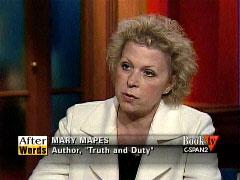 On his new blog over at U.S. News & World Report, cranky old liberal John Mashek (who earned the C.O.L. title for dismissing MRC's DisHonors dinner as "preposterous"  a few posts back) reports from a media panel at Middle Tennessee State University.

Networks Champion Cause of “Americans” Marching for “Immigration Reform”

The three broadcast networks led Monday night with multiple stories which celebrated the protest marches held by illegal immigrants and their supporters, with all three featuring sympathetic anecdotes about the plight of those here illegally. “Tonight,” ABC anchor Elizabeth Vargas touted in forwarding the red herring that conservatives are against “immigration” as opposed to illegal entry, “hundreds of thousands of people marching in streets across America, trying to convince the country that it needs immigrants." World News Tonight went to three field reports, starting with Miguel Marquez in Phoenix: “Everywhere you look, there are American flags. They're marching under the banner of 'Somos America,' 'we are American.'" But Dan Harris in New York City saw that “like many people here,” one man he spoke with “is carrying a Mexican flag. He says 'I don't need to carry an American flag for people to know that I want to be an American.'"

CBS anchor Bob Schieffer, who never uttered the word “illegal” in his lengthy introduction, teased: “They are not American citizens yet, but they want to be. And from every corner of America, immigrants took to the streets today to ask for new immigration laws. We'll go city to city tonight.” Schieffer trumpeted: "Not since the protests of the Vietnam era has there been anything quite like it. From the Canadian border to Texas, from California to the east coast, thousands upon thousands of immigrants in at least a hundred American cities took to the streets in peaceful demonstrations." Bill Whittaker championed “Alex Vega...a father of ten. He owns a business and a house in Orange County. He entered the U.S. illegally 28 years ago. He's marching today because he says he's tired of living in the shadows." From Washington's Mall, Jim Axelrod saw “tens of thousands of Americans” marching though many were illegals. Over on NBC, the least celebratory, Lester Holt heralded: “From border states like here in Arizona to unlikely places like South Bend, Indiana, and Harrisburg, Pennsylvania, illegal immigrants alongside their supporters stepped from the shadows. Marching under the American flag, they demanded a place at the American table." (Transcripts follow.)

By Joshua Sharf | April 10, 2006 8:18 PM EDT
Ever since Independence Institute researcher and fellow RMA blogger Ben DeGrow discovered that Colorado is 26th in education funding, not 49th, the local media has been, well, less than enthusastic. The Denver Post hasn't reported his findings at all.

A New York Times reporter who called recent corporate layoffs “worse than the Great Depression” was the paper’s choice to write about the positive job growth in the economy.

Reporter Louis Uchitelle authored somewhat critical view of the latest unemployment report by the federal Bureau of Labor Statistics (BLS). That report showed a 211,000-job gain in March 2006 and a low jobless rate of 4.7 percent. By comparison, nearly one in four Americans was without work in the early 1930s.