Managers at Google are allegedly not allowed to congratulate employees for behaviors that support the “U.S. White/male dominant culture.”

On Tucker Carlson Tonight on Thursday, April 26, 2018, Tucker Carlson discussed new information regarding the famous James Damore lawsuit against Google. Damore’s lawyer, Harmeet Dhillon, revealed Google managers were required to attend an “Inclusive Perf” training session that instructed them not to give positive feedback for behaviors that are “[v]alued by U.S. white/male dominant culture.” 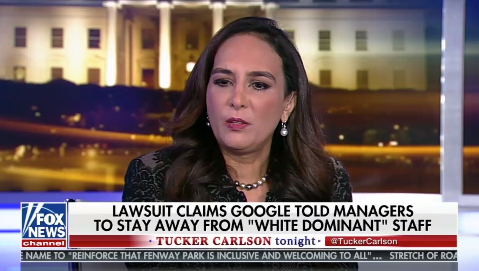 Among the things that are valued by the white male American culture, according to the handout, are “Perfectionism,” “Urgency,” “Meritocracy,” and “Colorblind racial frame.” Things allegedly “invisibilized” by the white male culture include “Listening, raises up multiple voices,” “Sustainability,” “Collective achievement,” and “Everything is subjective.”

The lawsuit, according to Breitbart, suggests to managers how they can “can give feedback to ‘women and people of color’ as opposed to giving feedback to males and Caucasians.”

They are coached, and sometimes forced, to evaluate people on, managers on, feedback they give to their employees. So this memo is about, when you give feedback to your employees, be careful not to give too positive feedback to white people, for stuff that is white, according to Google, such as merit-based performance and individual excellence, and so forth. And then when you’re giving feedback to people of color, you should be sensitive to the fact they are more likely to be in favor of group achievement and collective values.

“There’s some negative traits associated with whites, which is supposed to be that they talk about you, instead of to you,” Dhillon said. “So they’re backstabbing.”

“There are gross racial stereotypes on both sides that are deeply offensive. For example, to say that this stereotype that whites care about meritocracy and accomplishment is to imply that other races don’t. I mean, this is clearly absurd,” Dhillon continued. “The most absurd is that Jame Damore purportedly, after the fact, was let go because of gender stereotypes, but Google perpetuates racial stereotypes every day in its management.”