Kern, who grew up in Asia, was involved in some of Blizzard Entertainment’s most famous games. He worked as a producer for demon-slaying epic “Diablo 2” and as a team lead on “World of Warcraft.” He took what he described as a “huge risk” and damned American dependency on Chinese markets, saying in a tweet thread, “[W]e are in a situation where unlimited Communist money dictates our American values. We censor our games for China, we censor our movies for China.”

He added, “Now, game companies are silencing voices for freedom and democracy. China is dictating that the world be authoritarian.”

His Oct. 8 Twitter thread blasted his former workplace for bending the knee to Chinese censorship. This was over Blizzard announcing a one-year suspension and withholding prize money from professional video game player Chung Ng-wai, better known as “Blitzchung.” His crime had been shouting a Hong Kong protest slogan, “Liberate Hong Kong, revolution of our times!” during a post-game interview broadcast live from Taipei on Oct. 6. 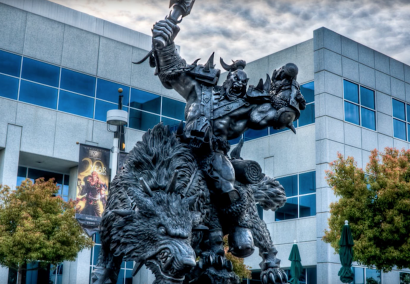 Kern declared: “[U]ntil Blizzard reverses their decision on @blitzchungHS I am giving up playing Classic WoW,” which, as he notes, “I helped make and helped convince Blizzard to relaunch.”

Kern explained how he is “ethnically Chinese,” was born in Taiwan, and lived in Hong Kong. He also said that he has done business with China “for many years, with serveral [sic] gaming companies there.”

He went into detail on how Western countries have underestimated the power of video games as entertainment while he “watched China slowly take over as the dominant investing force in gaming and movies over the years.”

Kern claimed that China “subsidizes” game companies, and claimed that they “get free land, free offices, and huge infusions of cash” from the state. He argued further that this leads to corrupt companies within China itself, and more power to buy stakes in how American companies themselves are run:

“I’ve seen firsthand the corruption of Chinese gaming companies, and I was removed from a company I founded (after Blizzard) for refusing to take a 2 million dollar kickback bribe to take an investment from China. This is the first time I’ve ever spoken pubically [sic] about it.

“I’ve also seen how American company reps in China have been offered similar bribes to get licenses for large AAA titles. Not everyone refused like I did.”

He accused Chinese companies of having “tried to ruin” his career “with planted press stories.” He put the entire Chinese media on blast by alleging, “Money is often paid for favorable press in China and some of that money flows here to the US as well.”

“Unfortunately, money talks,” Kern added, before saying, “China has succeeded in infiltrating all levels of tech, gaming and more.”

“So again, China influence grew,” he lamented, before theorizing, “I’m sure this is the same for movies as well.”

“But now we are in a situation where unlimited Communist money dictates our American values. We censor our games for China, we censor our movies for China.

“Now, game companies are silencing voices for freedom and democracy.

“China is dictating that the world be authoritarian.”

Kern stated that he has taken a “huge risk” making these accusations public because he fears “China monitors all social media,” and as a consequence, he may never get an investment from China for his upcoming Massive Multiplayer Online video game “EM8ER” (pronounced “Ember”).

“But enough is enough. I stand with Hong Kong, and I oppose Blizzard’s obvious and laughably transparent fear of China.

“It’s time for Blizzard to grow the spine it used to have, and to do what’s right for gamers once again.