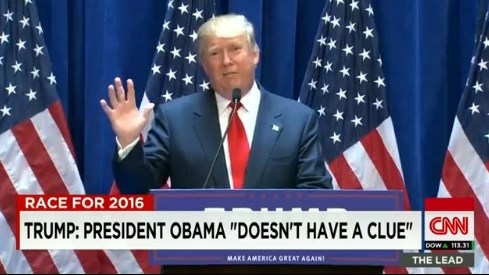 Not long after the February 2008 death of William F. Buckley Jr., The Wall Street Journal’s Paul Gigot commented that one of Buckley’s roles several decades earlier had been “to really police the conservative movement. There were a lot of elements of it that were bigoted…[He] purged the conservative movement of those kinds of elements, which was crucial to making it respectable and mainstream.”

In a Tuesday post, New York magazine’s Jonathan Chait, while not directly addressing Gigot’s point, nonetheless suggested that in spite of any policing or purging the righty elite had attempted, conservatism was and is driven by its riff-raff. Chait asserted, “Whatever [the] abstract arguments for conservative policy…on the ground, Republican politics boils down to ethno-nationalistic passions ungoverned by reason,” and remarked that Donald Trump’s supporters “have revealed things about the nature of the party that many Republicans prefer to deny.”

During the GOP presidential contest, indicated Chait, the “lunatic theories professed by most Republicans: the theory of anthropogenic global warming is a conspiracy concocted by scientists worldwide; the Reagan and Bush tax cuts caused revenue to increase; George W. Bush kept us safe from terrorism,” have lost ground to Trump’s “entirely different set of crackpot beliefs that lie outside conservative ideology.”

Nonetheless, Chait maintained, Trump built his campaign on a “crude tribalism” that’s nothing new on the right: “The paranoid mendacity of Joe McCarthy, the racial pandering of Barry Goldwater, Richard Nixon, and George Bush, the jingoism and anti-intellectualism of Ronald Reagan, George W. Bush, and Sarah Palin — all these forces have embodied the essence of American conservative politics as it is actually practiced (rather than as conservative intellectuals like to imagine it). Trump has finally turned that which was always there against itself.”