Until I read Wednesday evening's dispatch from the Associated Press by Deb Riechmann and Richard Lardner, I had no idea that the secretaries of state and boards of election throughout the land had surrendered their roles in compiling election results to the Associated Press.

Now I know better. In a report which primarily concerned former Homeland Security Secretary Jeh Johnson's appearance earlier that day before the House Intelligence Committee, the AP buried news that the Democratic National Committee had refused DHS's help after its systems were allegedly hacked, but also told readers that prior to Election Day, Johnson "contacted the Associated Press, which counts votes."

The AP pair buried what should have been the lede in their dispatch's final two paragraphs:

Johnson said he doesn't know whether the hacking of the Democratic National Committee's emails and other Moscow-directed interference "did in fact alter public opinion, and thereby alter the outcome of the presidential election." He said he was frustrated DHS learned of the hack into the DNC late in the game and said the committee refused help because it was using a private cyber security firm.

"In retrospect, it would be easy for me to say that I should have bought a sleeping bag and camped out in front of the DNC in late summer," Johnson said.

Johnson's testimony, combined with former FBI Director James Comey's Senate testimony in January that "the bureau requested but was denied direct access to the Democratic National Committee’s email servers and other hacked devices," means that there has been no confirmation from a government investigatory agency that the DNC was "hacked" at all, and that the media continues to assume that the "hacking" occurred based solely on the assessment of an outside firm with apparent conflicts of interest and basic problems with credibility.

The Hill also reported on Comey's January testimony, indicating that the FBI instead had to rely on "CrowdStrike, the private security firm ... (which) published extensive forensic analysis backing up its assessment that the threat groups that infiltrated the DNC were associated with Russian intelligence." But in March, CrowdStrike "revised and retracted statements it used to buttress claims of Russian hacking during last year's American presidential election campaign," and that "some cybersecurity experts have questioned its evidence."

It's absurd that Johnson's testimony that the DNC refused help from his agency didn't lead the AP's story.

Instead, reporters Riechmann and Lardner spent much of the previous verbiage in their report claiming retroactively, with the help of Johnson's convenient Wednesday testimony, that election systems in 21 states may have been "hacked," only to acknowledge later that even if such "meddling" occurred, which  as far as I can tell no one has demonstrated, that they had no direct electoral impact.

As has so often been the case since the Russian obsession began, the wire service also began the festivities with a deliberately scary and presumptive headline:

U.S. officials sought Wednesday to underscore for lawmakers the threat Russia posed to the 2016 vote for the White House, outlining efforts to hack into election systems in 21 states and to fill the internet with misinformation during a divisive campaign season.

Officials also revealed what appeared to be a breakdown in communications about how severe the threat appeared, and they reported tensions the Obama administration faced in trying to publicly warn of meddling in the face of a skeptical then-candidate Donald Trump.

What a pathetic excuse. Are we really supposed to believe that it's Donald Trump's fault that the Obama administration, if it genuinely believed there were credible threats to election system integrity, didn't or wouldn't do its job?

Well no, because four paragraphs later, the AP finally told readers that this "threat," if it even existed, had no tangible electoral results: 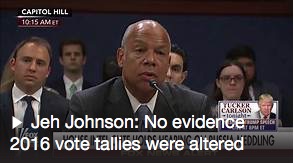 "It is not for me to know to what extent the Russian hacks influenced public opinion and thereby influence the outcome of the election," he said.

What is this "other meddling"? How would unsuccessful or even successful hacking "influence public opinion"? Was Johnson promoting the long-debunked and discredited theory that "fake news" produced by questionable and supposedly Russian-sponsored overseas clickbait sites changed some voters' minds?

Beyond that, based on DHS's actual conduct before the election, the supposed "Russian hacks" to which Johnson referred didn't happen.

Johnson and apparently almost everyone in the press and on the left want us to believe that a hack is any attempt to break in to a computer system. It's not, at least if one relies on the word's dictionary definition, which requires (meaning #7 at link) one of the following:

Seven paragraph after covering Johnson's discussion of "Russian hacks," the AP finally got to separate Senate Intelligence Committee testimony given by several secretaries of state, including Indiana's, who told the committee that Johnson had essentially told them that no hacking as the dictionary defines it had occurred, or was even on the radar:

Connie Lawson, Indiana secretary of state and president-elect of the National Association of Secretaries of State, said there were three conference calls led by Johnson with top state election officials about attempts to compromise state elections systems.

She said the calls occurred on Aug. 15, Sept. 8 and Oct. 12. "Each time Secretary Johnson was directly asked about specific, credible threats and each time he confirmed that none existed," Lawson said.

Johnson said in the late summer and into the fall, he was very concerned about the meddling in state election systems and that the department encouraged states to seek assistance from DHS.

The AP reporters never explained how Lawson's specific conference call recollections about "no credible threats" and Johnson's current claim that he was "very concerned about the meddling" could possibly exist in the same universe.

But all this concern about the integrity of state elections systems is apparently irrelevant, based on the following two paragraphs found near the end of the AP dispatch:

... (Johnson) also said he contacted The Associated Press, which counts votes, and its CEO, Gary Pruitt.

"Prior to Election Day, I also personally reviewed with the CEO of The Associated Press its long-standing election-day reporting process, including the redundancies and safeguards in its systems," Johnson said.

Either Johnson really believes that the AP "counts votes," and as such would serve as some kind of backstop against electoral hacking, or reporters and Riechmann and Lardner believe that, and are the most ignorant political reporters on earth. That verbiage is so clumsy that one can't tell for sure. What a choice.

Attributing special Election Night importance to AP is beyond ridiculous. The only thing AP needed to do its job on Election Night was robust online access to the states' election results web sites, just like everyone else on earth. Beyond that, it attempted to project election results, but so did the various broadcast and cable networks, several major newspapers, and dozens of other independent websites.

Why Johnson cared at all about "redundancies and safeguards" in the AP's reporting process is quite bizarre and potentially quite disturbing.