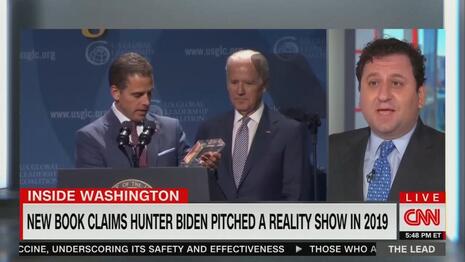 It’s a feeling you get that echoes last fall, a sense that every new example of investigative journalism on the Hunter Biden laptop is going to be ignored by the “mainstream media.” To be fair, when they didn’t ignore it back then, they constantly implied it was a Russian disinformation plot.

On May 28, the New York Post returned to the corrupt scene with a story on how “A photo shows Joe Biden with a pair of his troubled son’s business associates from Kazakhstan” at the Georgetown power-dining spot Café Milano. The photo “shows the Bidens smiling while flanked by Kazakhstani oligarch Kenes Rakishev and Karim Massimov, a former prime minister of Kazakhstan.” The Post reported this event occurred on April 26, 2015, while Biden was vice president.

A third man, banker Marc Holtzman, emailed Hunter Biden following the gathering. “Thank you for an amazing evening, wonderful company and great conversation,” wrote Holtzman, then chairman of Kazakhstan’s largest bank. “I look forward to seeing you soon and to many opportunities to work closely together.”

Hunter Biden is never the president’s favorite son, or the media’s favorite Biden. NPR tweeted over the weekend “President Biden spoke in observance of Memorial Day at the Delaware Memorial Bridge on Sunday. It was also the sixth anniversary of the death of his son, Beau Biden, who had served in Iraq.”

On CNN’s Reliable Sources, Hunter Biden’s name emerged only as reporter Arlette Saenz – the absolute opposite of Hostile Acosta  – noted the president went to Beau’s gravesite. “He was there with his family, including Beau's son [sic], Hunter Biden. There was a moment where you saw the president and Hunter embracing.”

She then touted how the president relates “his own sense of loss” with grieving military families. “Beau had served in the Delaware National Guard and actually spent some time in Iraq and the president said that seeing his son in uniform made his heart swell.”

Team Biden works in the memory of Beau Biden whenever possible. A recent promotional interview with MSNBC’s Lawrence O’Donnell ended with a sappy question about how Beau would see his “Pop” today, which allowed the president to get all misty over the thought. Obviously, O’Donnell had no troubling Hunter questions.

The other CNN mention of Hunter Biden since the New York Post story broke came just hours later on Jake Tapper’s CNN show The Lead. Tapper was interviewing liberal journalist Edward-Isaac Dovere about his new book Battle for the Soul on the Democrats running for president in 2020.

WHAT? The reality show never happened, but how did this story go untold during the entire election cycle? Especially once Hunter Biden became a central figure in the campaign? Because everything was about suppressing Hunter’s importance.

Dovere explained “One of the producers says to him, ‘does your father know what you're doing here?’ And he says, ‘yeah yeah, he knows, he knows.’ And Joe Biden himself has sort of -- described in the book as a sort of willful naivete about this. He was always saying to Hunter, ‘you know what you're doing, right?’”

“Willful naivete” pretty much describes the entire pro-Biden press corps when it comes to Hunter Biden. It’s all see no Hunter, hear no Hunter, speak no Hunter.