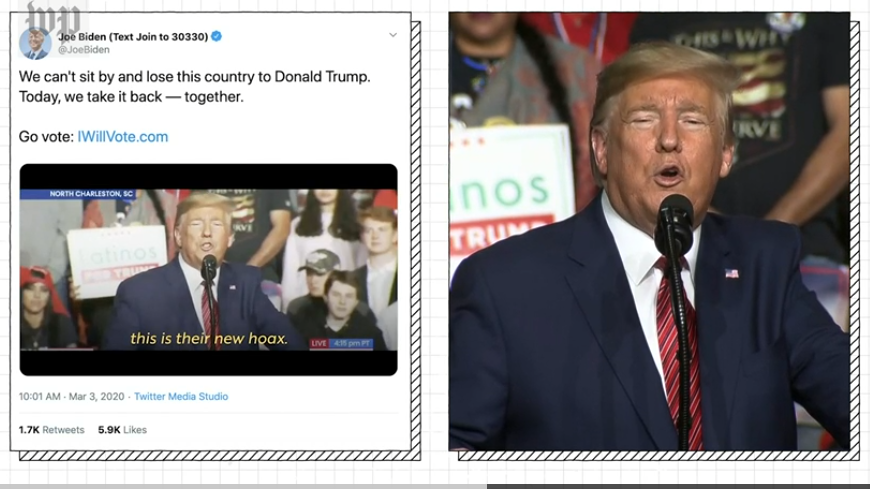 In the growing squabble between the presidential candiates (and the social media giants) about manipulated video, The Washington Post “Fact Checker” squad deserves credit for throwing flags at both sides. We won’t expect them to keep a running count of Biden’s “false or misleading statements,” but this is something. They gave Four Pinocchios to a Biden video that deceptively edited Trump statements.

Meg Kelly explained “Earlier this week, we examined three videos -- including one by the Trump campaign -- that met our standards for manipulated video. But the Biden campaign isn’t shy about playing the same game of video trickery.”

(We weren’t convinced that one of those, Trump’s team mocking a Biden gaffe, was that “manipulated.”)

Seven seconds later, the ad shows a video of Trump hugging the American flag, as audio is added: Trump says “the American Dream.” Then, after a fade to black, there's a  tight shot of Trump saying the words “is dead.”

The second clip and the audio seem to match Trump’s June 2015 announcement for president. Kelly noted that Trump often said  “the American Dream is dead” on the 2016 campaign trail, but "each time — including during his announcement — the then-candidate followed that line with some variation of: 'If I get elected president I will bring it back bigger and better and stronger than ever before, and we will make America great again.'"

While the first, “coronavirus, this is their new hoax,” is a clear example of omission, we were torn between Three and Four Pinocchios. On one hand, the administration continues to promote falsehoods about the virus and vilify Democrats for criticizing its response. However, the video doesn’t point that out or explain what is wrong with this characterization. Rather, it just puts the words “coronavirus and “hoax” close together, leaving the viewer to assume Trump meant that the novel coronavirus itself was a hoax.

The second example is far more straightforward. The ad isolates Trump’s comment with no context.

Ultimately, the seriousness of the coronavirus outbreak, the fact that Trump had clarified his comments on the matter before the ad was released, and the blatant way the Biden camp isolated his remarks about the American Dream pushed us to Four Pinocchios. Campaigns must be willing to make their case without resorting to video manipulation.

Trump aide Matt Wolking issued a statement: "These are the Biden lies that Twitter is currently defending by refusing to apply its 'manipulated video' label equally across the board. Now that an independent, third-party fact checker has ruled the Biden video is manipulated to deceive, Twitter must immediately say whether it meets their "manipulated video" standard, and if it does, treat it the same way Twitter treated President Trump's campaign."

PS: There's just one more fascinating point. For some reason, on their "Fact Checker" home page, there's no visual Four Pinocchios assigned to Biden. Someone just....forgets? 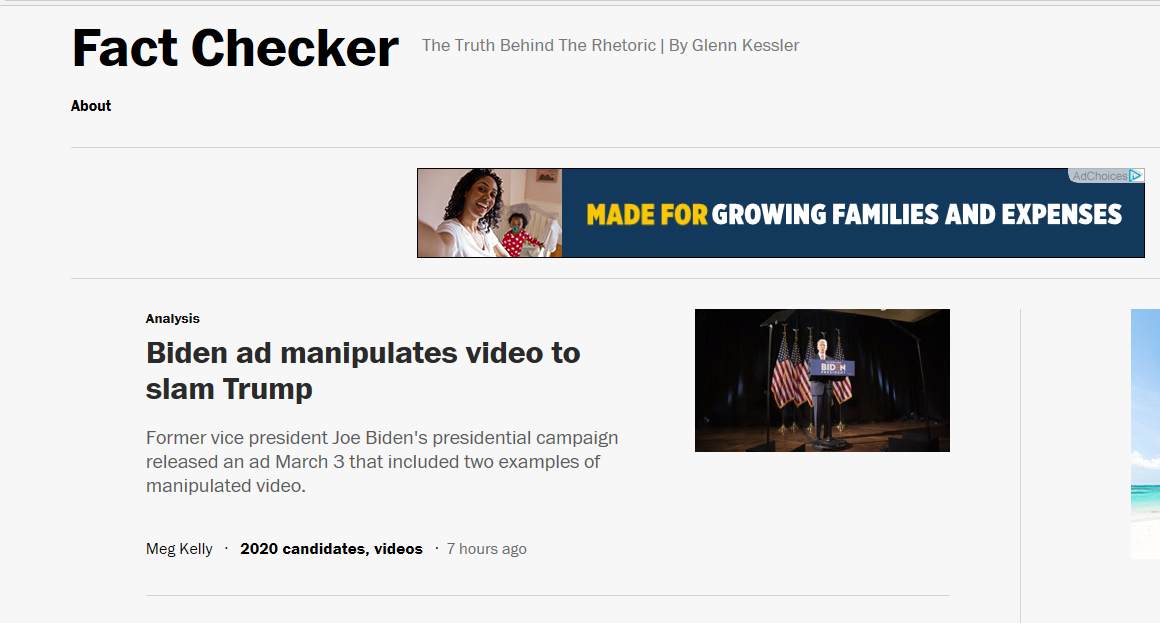 But go back a few fact checks, and the Pinocchios are pasted on Trump, as they often are.

We have rated this Washington Post fact check as "The Real Deal." For more on this subject, click on our Fact-Checking tthe Fact Checkers page.