Wemple began with how Spicer's apparently too radioactive for a cable-news pundit gig, as Obama's spokesmen Jay Carney and Josh Earnest (not to mention "bimbo-erupting" Clinton aide George Stephanopoulos) did immediately: "Spicer spent months berating White House correspondents, sticking up for a president who’d called certain media outlets 'the enemy of the American people' and spreading misinformation with very little contrition. Any major network that hired Spicer as a contributor may well have faced a revolt among its White House correspondents, as well as other journalists outraged by the press secretary’s conduct."

But that doesn't mean the media's liberal.....no! It isn't spun the other way: "Jim Acosta has credibility issues after he spent months berating the president as 'eroding our freedoms' and causing the violence in Charlottesvillle...." Spicer lamented the "one-way street" on which the media somehow are never "spreading misinformation with very little contrition." 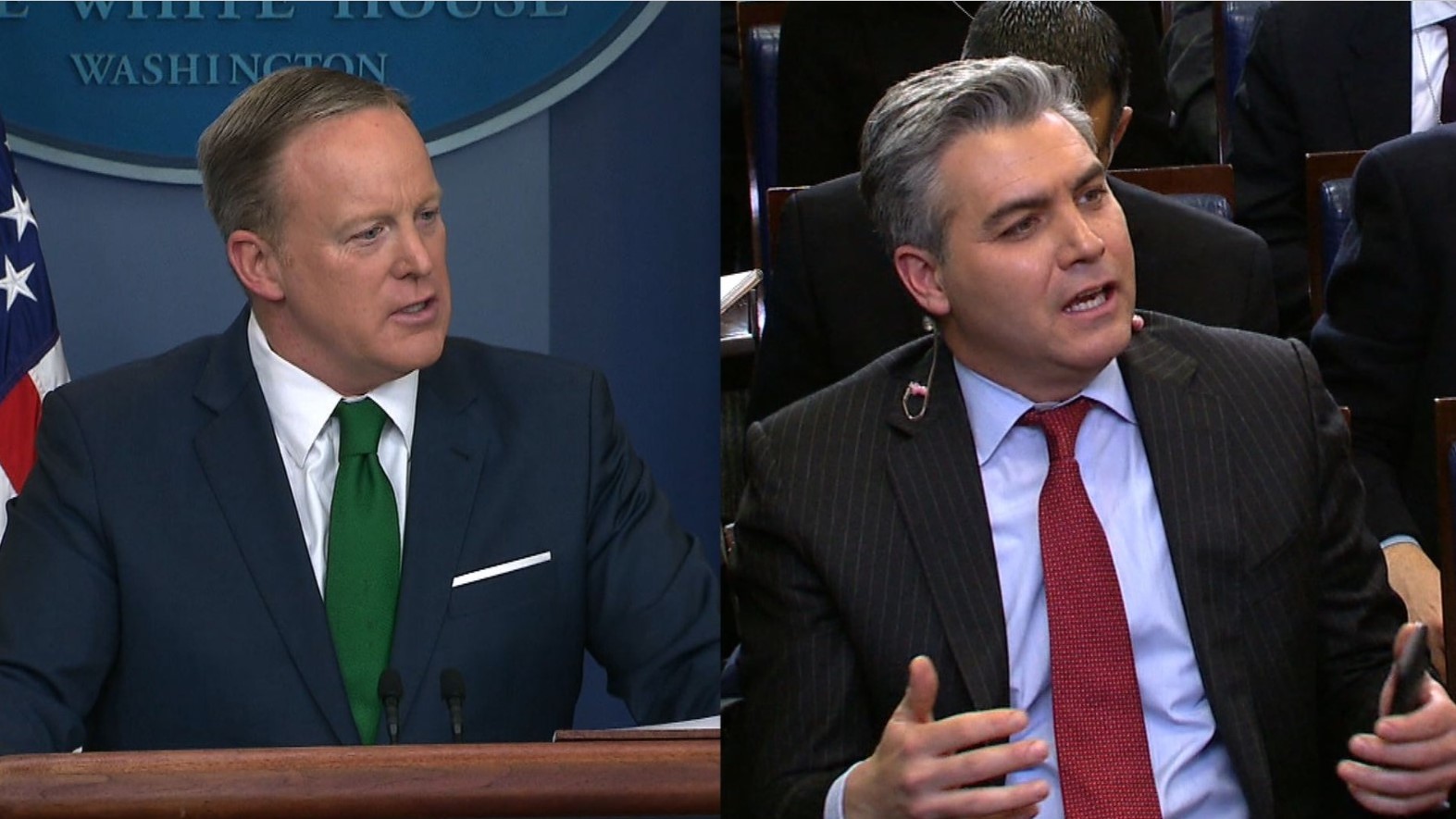 Spicer doesn’t have many regrets over the media-bashing that occurred during his tenure as press secretary. It’s an “unbelievably one-way street that these guys can go out there and be wrong” about various issues and proceed to the next story with “zero consequences.” As an example, he argues that the “same press corps” that slams the Trump administration for every little thing allowed then-White House press secretary Jay Carney and then-Secretary of State Hillary Clinton to talk about how Benghazi was “caused by a video.”

Like those folks, says Spicer, the media is “largely a liberal group of people willing to overlook” the missteps of a Democratic administration. Okay, but then why would the media go overboard on a story about how emails showed that the White House was orchestrating Benghazi talking points?

What? Wemple linked to a 2013 Huffington Post story where ABC’s Jonathan Karl apologized for overstating something out of the e-mails of top Obama national-security aide Ben Rhodes -- the guy who boasted how he could bend the media to his will like a ventriloquist. He didn't mention Obama skipping reporter questions in the Rose Garden and flying off to Las Vegas for a fundraiser (as a complicit media yawned). He didn't mention Susan Rice lying about the attack being caused by a YouTube video on five Sunday interview shows.

What did the media do in 2012, before the election, when the Benghazi terrorist attack could cause real peril to Obama? As Spicer suggested, they rolled with the Obama talking points about it being caused by a video....until the facts made that impossible. Speaking of softballs, 60 Minutes (and the CBS Evening News) aired an interview clip letting Obama sneer that "Romney seems to have a tendency to shoot first and aim later" on Benghazi when the story was hot in September, and then on the last weekend before the election, posted on their website some video where Obama refused to call it a terrorist attack, because "I don't want to jump the gun on this." Imagine if they'd aired that right after it was taped. The Candy Crowley debacle would have been avoided.

For how the networks really behaved in 2013 in aiding Obama on Benghazi, see our review by Geoffrey Dickens.

Spicer complained about Washington Post reporter Jenna Johnson's cheap shot claiming Spicer was "in the bushes" on the night of the James Comey firing, which had to be corrected -- but not before that became a boiling-hot meme on left-wing social media. At that point, does the correction matter? Or is the damage already done? "Jenna Johnson made up a lie about me being in the bushes,” Spicer said, and Wemple doesn't write that she'll never get a gig on cable news.

Wemple also lamented the idea that Spicer thinks the White House Correspondents Association can be asked to rebut reporters on media-access claims...as if White House reporters know anything about media access to the president. Wemple’s right: You can’t ask people who invite Trump-trashing comedians to headline the White House Correspondents Dinner to do anything but make Trump miserable. Reporters aren't going to come to a president's defense like that....if the president's Republican.

Though Spicer is critical, he doesn’t sound bitter. When we asked him to name White House reporters who did good work, he was generous: Jennifer Jacobs (Bloomberg), Margaret Talev (Bloomberg), Steve Holland (Reuters), John Roberts (Fox News), Kayla Tausche (CNBC), Eamon Javers (CNBC), Carol Lee (NBC News, “very solid reporter”), Hunter Walker (Yahoo). “I’m missing a bunch, for sure,” says Spicer. When we asked whether he’s failing to include anyone from CNN, he responds, “Oh, no.”