Are You Kidding? Stelter Agrees with Hannity, Suddenly Opposes Boycott of Crude Colbert 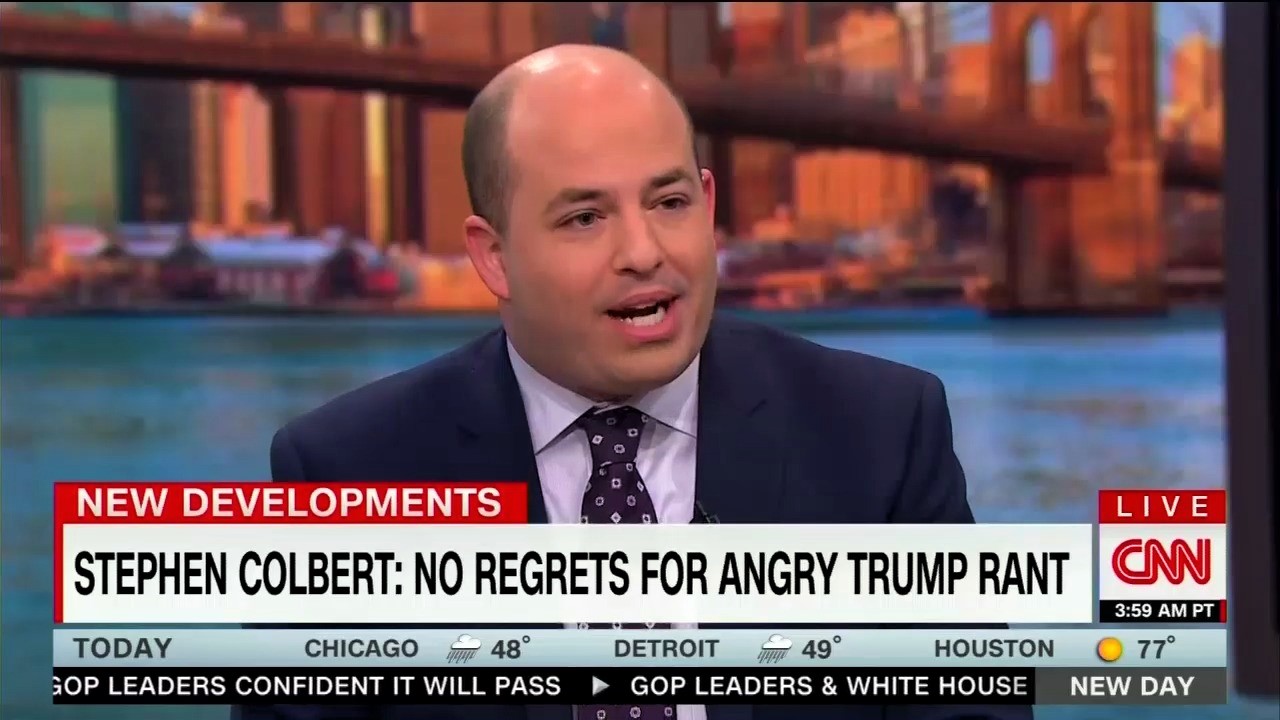 CNN media reporter Brian Stelter offered a mysterious utterance in a segment on Colbert's crude penis-holster joke against the president on Thursday's New Day, proclaiming his public agreement with Sean Hannity. He insisted: "I've never said those words before."  But he came out against boycotts of Colbert's advertisers.

Are you kidding? This comes just days after CNN's Media Unit pestered Bill O'Reilly's advertisers for days to withdraw their money from Fox News. Stelter & Co. didn't return calls for comment when the Daily Caller asked if any advertiser pulled support before CNN called and asked them if they were going to boycott. On April 7, CNN's Tom Kludt (formerly of the lefty blog Talking Points Memo) boasted:

Fox News' The O'Reilly Factor has now lost 60 advertisers in the wake of a New York Times report that five different women had reached settlements over allegations of sexual harassment or verbal abuse against the show's host, Bill O'Reilly.

CNNMoney has reached out to dozens of the companies that have run ads on the program. Below is a list of the responses we've received so far, as well as some responses that companies have put on their Twitter accounts...

Apparently, the CNN logic is this: We didn't "lead" a boycott. We "reported" it. We made a big list of O'Reilly advertisers and called dozens of companies asking if/when they're going to dump their ads. Day after day, they touted "ad boycott spreads" in their e-mail newsletter. This is how the New Day segment wrapped up:

BRIAN STELTER: I'm with Sean Hannity on this one. Hannity, and, by the way, I've never said those words before.

STELTER: Hannity said, I don't support any kind of boycott because that's what the left is trying to do right now to people like Ann Coulter. Let's not try to shut down anybody's right to speak -- [unless he's named Bill O'Reilly?]

CHRIS CUOMO: Good for him.

STELTER: -- in this country.

CAMEROTA: Yes, yes, look. Agreed. But you know, obviously, good judgment goes along with that.

BILL CARTER: Yes, it does.

CAMEROTA: So, there's always the balance that were always forever trying to rise [to].

Stelter also displayed his sudden conversion on ad boycotts on his Twitter page: 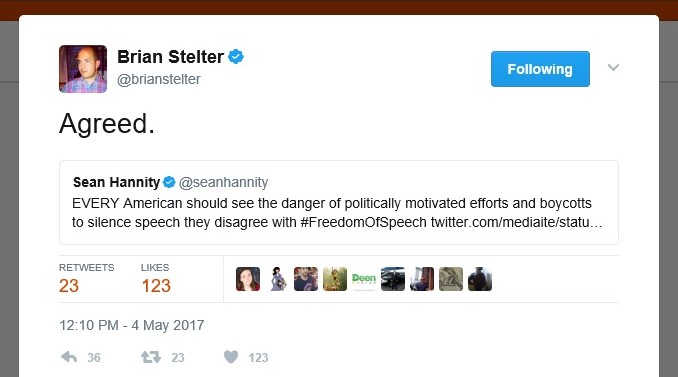 Earlier in the segment, Chris Cuomo slammed Trump for his somehow unprecedented shutdown of the CBS interview with John Dickerson (Ahem, it went on for 43 minutes on two CBS programs). Cuomo tried to claim a "majority" of Americans disapprove of Trump, so naturally Colbert's dick jokes speak to a majority:

CUOMO: I have interviewed a number of presidents. I have never seen a president do what he did to John Dickerson. Never.