CNN.com ran a shocking headline on Thursday: “5 Must-Have Apps for Undocumented Immigrants.” Anyone in CNN’s audience knows which side they take on immigration, but this is the most obvious they’ve ever been. “Here’s how to evade the law, by CNN.”

President Trump's efforts to crack down on immigration have left millions of undocumented immigrants with an uncertain future in America. In response, digital entrepreneurs are using technology to help support this community.

Here are some of the emerging apps to help illegal immigrants frustrate the government [Hat tip to MRCTV's Brittany Hughes]:

With a press of a button, undocumented immigrants who are the subject of a raid by Immigration and Customs Enforcement will be able to use the Notifica app to send customized messages to 15 personal contacts. The app hasn't launched yet, but it has more than 7,000 people on the wait list to download it.

"Notifica is an app that gives people control of their own destiny," founder Adrian Reyna says. "I want to do everything in my power to make sure that individuals aren't afraid and they are able to live a life with dignity and respect that they deserve."

He says the app will make sure undocumented immigrants don't compromise their safety or their contacts' safety. The messages are encrypted, and all records disappear after the message is sent.

A hub for immigration resources, Arrived displays the latest immigration news and educates users on the deportation process. It also offers English lessons, answers popular queries like "how to write a resume" and offers a map with every non-governmental organization, law clinic and sanctuary city in the United States.... 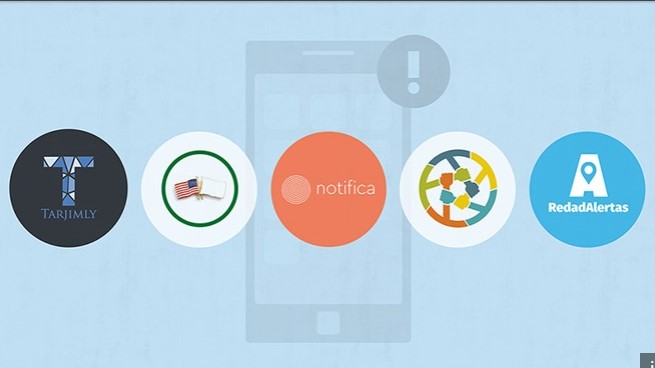 Tarjimly is a Facebook messenger bot that connects a community of 2,000 volunteer translators with immigrants and refugees in real time. The bot plans to launch globally this summer....

"Tarjimly is extremely important given a political climate where Trump can ban immigrants and refugees," co-founder Atif Javed says. "Technology must help us stick together in Trump's America and eliminate the fear we have of suffering people."

Although Cell 411 isn't specifically for undocumented immigrants, the app recently rolled out features for that population. It allows users to contact close friends and family when being confronted by ICE officers.

"I'm an immigrant myself," says founder and CEO Virgil Vaduva. "I remember when my visa expired and how terrifying it was."...

This soon-to-be-released app will deliver verified and crowdsourced data on ICE raids, checkpoints or other confrontations happening nearby.

That would have to be the CNN favorite, when "journalists and activists" -- and who can tell the difference at CNN? -- can "protect immigrants" from government officials. So what if these apps help criminal aliens escape detection after they've committed crimes? Let's hazard a guess that CNN didn't ever consider any critical questions.