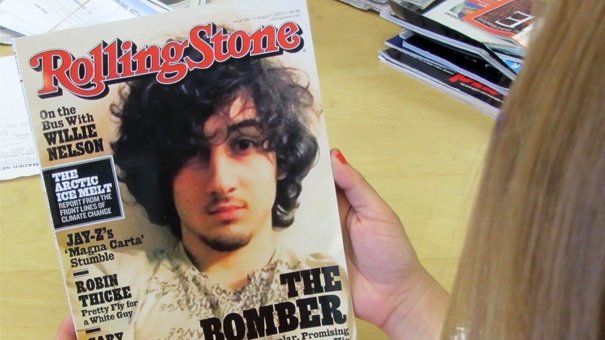 Rolling Stone is matching the provocations of Donald Trump with this headline: “If You Support Donald Trump, You Are Unpatriotic.” Remember the Bush years, when you could never accuse someone of lacking patriotism? Dissent is patriotic, and all that? And which magazine put the Boston Marathon bomber on their cover like a rock star?

The subhead was “Any American who would pick and choose which religions get the sacred protection of religious freedom is no American.” In that case, Rolling Stone, meet President Obama, who has chosen to drag the Little Sisters of the Poor to court because Catholic sisters need to pay for birth control.

The hippie rag’s Jesse Berney believes a “religious test” to impose contraceptives and gay weddings are acceptable, but the immigration restrictions are un-American: “Even when it comes to religious freedom we can disagree, as recent arguments over birth control and wedding cakes demonstrate. But anyone who takes a moment to breathe and consider would realize that applying a religious test to immigration – not to mention own citizens – must know that it is a profound violation of the most basic values we are all supposed to share.”

Berney honored Thomas Jefferson for founding our religious liberties – while also ignoring what Rolling Stone’s appalling pseudo-journalism did to smear the Jefferson-founded University of Virginia as a haven for unpunished rape on campus.

The immigration debate has always been contentious, but adding a religious test to entry creates a new fault between the sides. And those on the side that would ban all Muslims from entering the United States have forfeited their rights forever to claim to be patriotic Americans.

They have given themselves totally over to fear – and, let's be honest, hatred – and allowed it to destroy their belief in the absolute minimum of what it means to be an American. We don't arrest people for saying things we don't like, and we don't discriminate because of religious beliefs. Those are the basics, and if you can't manage those, you do not love this country

Berney was right to note Trump’s off-the-cuff talk of a Muslim ban typically came with no specifics, and it’s an obvious and ugly overreach, politically and legally. But the people who love Rolling Stone can't be mistaken for religious people (unless you count the "Church of Cannabis"). Their militant defense of all Muslims is downright weird compared to their mockery of Christians -- like when one of the magazine’s stars penned the vicious article “52 Funniest Things About the Upcoming Death of the Pope.”