Washington Post movie critic Ann Hornaday disclosed a bit too much Friday about the power trip that media elitists go on to save the world from evil. The movie review was about Spotlight, a film that claims to be an accurate representation of the Boston Globe's Pulitzer Prize-winning crusade in 2001 and 2002 against clerical sex abuse in the Catholic Church.

Despite claiming she's this big Christian going to the movies, Hornaday didn't spend one minute wondering if perhaps the Ted Kennedy-worshipping Globe relished its war on the Archdiocese of Boston because it represented an antiquated "anti-abortion, anti-gay" obstacle to liberalism. No, it was all for truth and justice, not a political agenda. These were her disclosures:

For one, the film's chief protagonist, Globe editor Marty Baron, is now executive editor of The Washington Post.

Surely, it's a true story that there were monsters disguised as men of God that abused children. But it's also true that there are contrary facts that this reporter-boosting movie excluded, like the gay-activist priests that the Globe promoted in its pages -- until it turned out their gay liberation was unleashed on children. But Hornaday thinks this movie is good enough to be ranked up there with Citizen Kane: 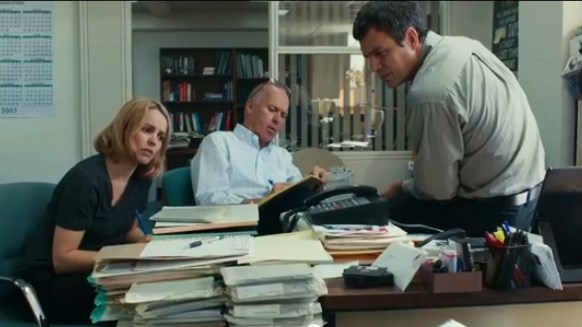 McCarthy proceeds to get everything else uncannily right, from the overstarched shirts and pleated khakis worn by the Globe’s male reporters to the drudgery of looking up old clips and cranking microfilm. It’s not a stretch to suggest that Spotlight is the finest newspaper movie of its era, joining Citizen Kane and All the President’s Men in the pantheon of classics of the genre....

If Citizen Kane was a monumental narrative of operatic scope and visual ambition, and All the President’s Men a tautly paranoid thriller attuned to the dawning cynicism of its time, Spotlight has achieved something far more difficult, marshalling a pure, unadorned style in the service of a story that rejects mythologizing in favor of disciplined, level-eyed candor.

Perhaps Hornaday can look forward to a cushy Christmas bonus for telling readers that her Post boss Marty Baron really shines in this "based on real events" movie, that he is the solitary soft-spoken hero who asks the hard questions.

For his part, Liev Schreiber delivers a crafty, masterfully understated portrayal of Baron, who assigns the abuse story the very first day he arrives at the paper as its new, slightly enigmatic editor. It’s Baron’s status as an outsider — as one character puts it, “an unmarried man of the Jewish faith who hates baseball” — that gives him the distance necessary to ask uncomfortable questions of an institution with which the Globe historically had a cozy relationship.

A solitary, soft-spoken, ultimately poignant figure, Baron is the closest thing Spotlight has to a hero, no more so than when he resists the temptation to run with a particularly juicy piece of information, preferring to keep the team’s focus on the system rather than on one individual. If Truth, which dramatizes the disastrous 60 Minutes II episode investigating George W. Bush’s National Guard service, is a cautionary tale about rushing a story, Spotlight is its antidote.

Hence you can see why journalists would rush to embrace this tilted tale: No really, we're the good guys! We never rush a story and smear people!

Unsurprisingly, Boston Globe movie critic Ty Burr displayed a thrill up his leg about the movie as well: “Actually, one of the reasons that Spotlight is so deeply, absurdly satisfying to this newspaper writer — and to most of those I’ve spoken with, at the Globe and elsewhere — is that Tom McCarthy’s movie doesn’t turn its journalists into heroes. It just lets them do their jobs, as tedious and critical as those are, with a realism that grips an audience almost in spite of itself.”