Comedian Evan Sayet: Liberals Think 'It's An Act of Bigotry to Be an Objective Reporter'

Conservative comedian and lecturer Evan Sayet spoke about liberals and the media on C-SPAN a few weeks ago. His most recent book is called “KinderGarden of Eden: How the Modern Liberal Thinks.”

“The Universal Field Theory of Liberalism; and Why the Mainstream Media Gets Every Major Story Not Just Wrong, But as Wrong as Wrong Can Be” was the title of a lecture Sayet gave on January 7 at the Conservative Forum of Silicon Valley. He said liberals believe “It’s an act of bigotry to be an objective reporter.” This is the main idea: 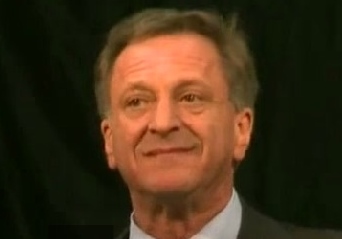 SAYET: The modern liberal, there’s something about his ideology that leads him to invariably and inevitably side with evil over good, wrong over right, the lesser over the better, the ugly over the beautiful, the profane over the profound, and the behaviors that lead to failure over those that lead to success.”

If no religion, no culture, no person, if no behavior, if no form of governance – if nothing is better than anything else, then success is unjust. Why should a person, a nation, a government, religion succeed, if it’s not better than any other? So that liberalism says “everything is equally good, man, coexist – doesn’t make everything meet in the middle. It makes the better, bad.

He compared the liberal view to a game of roulette, where no number is better than any other, that “you can’t say the winners are smarter or work harder or are better than the losers, it’s just pure luck.” After the same people win and the same people lose repeatedly, “You can see the losers looking over at the winners’ pile and saying ‘You didn’t build that.’”

He cracked wise about Katie Couric:

I don’t think there’s a single one of us here who believes Katie Couric is an evil genius – on both counts. Right? She’s not evil, and she’s far from a genius. She’s an idiot. And to show you what idiots journalists are, this is a woman whose greatest credential as a journalist is she was a daytime chat show host who once interviewed [chef] Paul Prudhomme and got his secret recipe. That she is then not only delivering the news, obviously they know the news is a joke! But then to have the University of Southern California Annenberg School of Journalism give her the Walter Cronkite Award for excellence in television journalism. If she’s the most excellent television journalist out there, how bad must Wolf Blitzer be?