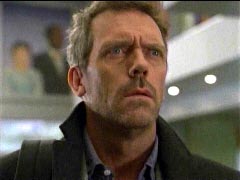 Washington Post TV writer Lisa de Moraes reported Friday that Team Obama is demanding a lot of free TV space in prime time in the next few weeks: a Monday night press conference, a "stimulus" push on the Monday night after that, the 16th, and the State of the Union on Tuesday, February 24. (What about House, and The Bachelor?) Network suits are already whining, but are too afraid of pulling out the Just Say No card:

Broadcasters are bracing themselves for the likelihood of three prime-time interruptions in three weeks, totaling at least three hours of prime time -- and ad breaks -- yanked.

"His economic stimulus package apparently does not extend to the TV networks," one network exec noted.

Obama's reps have alerted broadcasters that the president will hold a news conference Monday, according to network execs. It's expected to eat up the first hour of prime time; that alone could cost broadcasters more than $9 million in lost ad revenue....

"Notice they're not going on Friday or Saturday," one network exec complained. "They're . . . preempting our better shows. You're not happy to lose a 'House' if you are Fox, or two of the better comedies at CBS, or 'The Bachelor' at ABC -- we're all going to take a bath."

So skip them? The networks were not afraid to tell President Bush that his political salesmanship wasn't worth pre-empting in prime time. But none want to "incur the wrath" of Obama (and unlike Bush, it's not so easy to stiff the president unanimously in an act of ideological solidarity):

Although the broadcast networks can opt out of carrying these presidential appearances, "you don't want to incur the wrath of the White House" because "if you're on the [poop] list, you are last in line for interviews and things like that," one network exec explained.

But besides the economic hit, broadcasters are worried that this kind of shock-and-awe approach to prime-time preempting might be part of an Obama strategy to charm his way to a new economic-rescue plan. "As we're meeting this guy, from a network perspective, it's like, 'Is this part of the plan for him?' " the network exec said. "Is this what it's going to be: Is he going to take to the airwaves every time he has something to say?"

Such a strategy, of course, could backfire.

"Do people really want to come home after looking for a job, or after being at a job they hate, sit down to veg out in front of their favorite show -- and he's on again?" said one TV suit, who suspects/hopes the Average Joe's reaction to too much Obamavision might be "nothing he's going to say is going to help me get a job, or put food on the table."

Said the TV suit: "He could lose a lot of goodwill doing this."