Wallace with Ahmadinejad: Some Tough Questions, Some Apple-Polishing Interludes 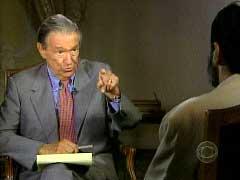 CBS's Mike Wallace spent a half-hour of network air time with Iranian leader Mahmoud Ahmadinejad, and some of his questions were tough, about Hezbollah violence and Holocaust denial and the Iranian leader's desire to wipe Israel off the map. Most surprisingly, he suggested the Iranians were providing explosives to the Iraqi insurgents (something the American news media doesn't usually highlight), and ended by suggesting there were reports of Iran having 52,000 trained suicide bombers to launch against American and British targets in case they are attacked.

While it was measurably tougher than Dan Rather's embarrassing 2003 sit-down with Saddam Hussein, CBS did air moments of Wallace kissing up to Ahmadinejad. "I couldn't be happier with the privilege of sitting down with the President of Iran," he wallowed at one point, as Ahmadinejad claimed Wallace was getting angry.

At another, when Ahmadinejad was passed a note to fix his khaki coat, Wallace dipped lowest in servility: "I think you look just fine...Let me assure you. You look your best," he said. CBS may believe these comments are necessary to keep the interviewee buttered up enough that he finishes the interview. But it doesn't do their own reputation any favors to show their apple-polishing interludes in their salivating desire for access, and ratings. His lamest question came right after this exchange: "What do you do for leisure?"

Wallace's questions were tough enough for Ahmadinejad to accuse him of being an Israeli mouthpiece when he suggested Hezbollah was doing violence to Israelis: "Are you a representative of the Zionist regime or are you a journalist?" Wallace replied, "I am a journalist." Ahmadinejad shot back: "This is not journalism, sir."

Some of the Iranian leader's answers were ridiculous: He claimed "the time of the Bomb is past," and it was now time for dialogue and cultural exchanges. (There, he sounded like a Soviet spokesman for detente.) At another, he claimed the U.S wants to "monopolize energy resources in the world" so they can order the world around and also "line their pockets." (Here, he sounded like an American or European leftist.) He said Iran opposed oppression: We are opposed to oppression. We support whoever is victimized and oppressed, even the oppressed people of the US."

At other times, he sounded like a Democratic politician, saying "I was saddened to hear that one percent of your total population is in prison, and 45 million people don't have a health care cover [sic]. That is very sad." He claimed President Bush's "approval rating is dropping every day," and "hatred vis-a-vis the president is increasing every day around the world." He even said of the Bush team (and the U.S. government in general): "They want to build an empire."

There had to be some MoveOn/Michael Moore types and Daily Kosmonauts who loved hearing Ahmadinejad spreading "the truth" on TV.