During a segment on her CNN show this morning, Carol Costello and Mashable’s Christina Warren had a good laugh over Hillary Clinton’s response to Fox News correspondent Ed Henry’s question concerning whether or not she wiped the content on her digital e-mail servers. When asked “Did you wipe the servers?” the Democratic hopeful responded with “What? Like with a cloth or something?”

The CNN host and Mashable senior tech correspondent simply dismissed her response as “a fun way to obstruct a question."

CAROL COSTELLO, Host: Okay. You see she was joking about it, right? So exactly how does that work digitally? We're joined by Christina Warren. She's the senior technology correspondent for Mashable. Thanks for joining me. I appreciate it. So. I mean you had to laugh when Hillary Clinton said that. Clearly she must know what wiping a server means?

CHRISTINA WARREN, guest: Absolutely. Absolutely. Of course she knows. But It was a fun way to try to, maybe, obstruct from the question.

This was all the time they would dedicate to the controversial comments, as they moved on to the process of how digital servers work. However at the end of the segment, Costello did state "I just wish they'd be more transparent so we would exactly know." Of course they immediately spun this for Clinton, reminding people that State Department servers have been hacked in the past, and that her recent comments could be “perfectly innocent.”

WARREN: That's the biggest problem here. There's a lack of transparency. It's hard for regular people to understand how this works, 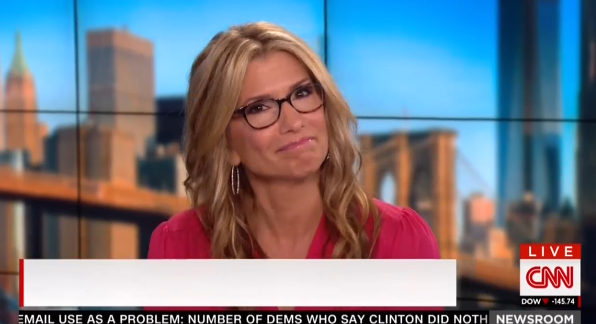 but I feel like if they would be open and say this is how it would be secured, this is what we did, this is how we were protecting the data, then the people in the technical community could audit that and say, yes, this is appropriate, no, it's not appropriate, and we could have a conversation maybe about other things. The problem is right now we don't know so many other things. It's easy to draw conclusions and go to the worst-case scenario.

COSTELLO: And in fairness any little thing you say as a politician can be twisted by the other side so easily even if it's a perfectly innocent statement, right?

WARREN: Absolutely. And I think it's also important to point out even though she's been getting blowback from using a personal server, the white house server hasn't been the most secure either. So I really thing if anything was happening classified, that's the biggest thing they need to discuss above and beyond the fact that she was using her own server.

Costello and Warren also conveniently left out that the servers were kept in the bathroom closet of a loft apartment in Denver, Colorado.