RACHEL MADDOW: We have to zoom in– Can we zoom in? What's that? Ta-da! Ha-ha! BERNIE! Bernie Sanders for president. Dara wrote to us “Bernie appeared in the most unexpected of places, and it made my day.” Bernie Sanders, the independent social from Vermont making his mark in Deadhorse, at the end of the Dalton highway in the northern most reaches of oil town, red state Alaska.

Well it would appear the Deadhorse, Alaska General Store vote is locked up for Bernie!

Maddow continued her 10 minute segment on the Vermont socialist by focusing on how large crowds of young people attend his events, and wrapped it up by trying her best to twist the poll numbers in his favor: 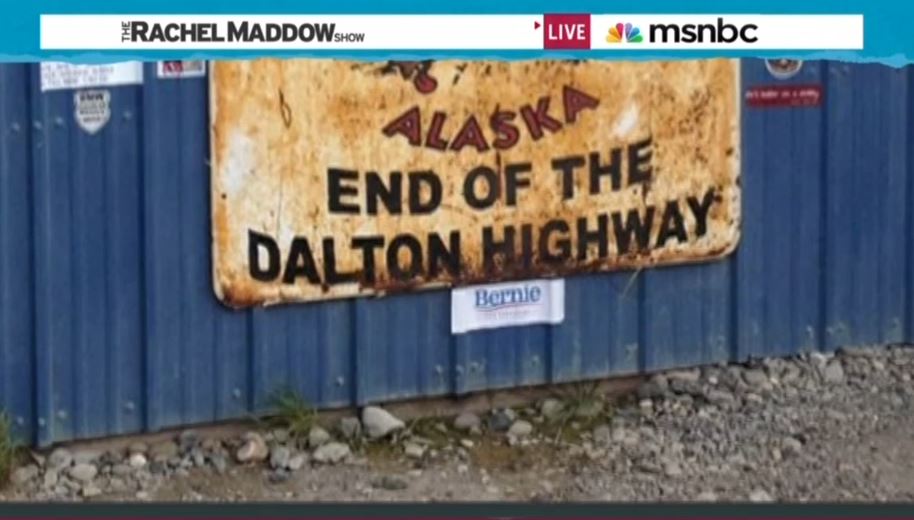 I firmly believe that anything that foils the common wisdom, that spectacularly has to be good for us as a country. Shakes it up a little bit. Whatever caused the common wisdom here needs to be changed because the common wisdom is wrong and the Sanders phenomenon isn't a flash in the pan. It's been going on for a couple of months now. The latest NBC/Marist polling from the early states, which came out this weekend, shows Hillary Clinton does still have a very big lead over Bernie Sanders in Iowa. But in New Hampshire, look. Sanders is now polling within seven points of Hillary Clinton. It is the unlikeliest turn of events. Liberals aren't only alive, they are making themselves known in giant numbers in unexpected places.

You don’t have to look far back in history to find a scenario very similar to this– an older presidential candidate promising massive crowds of energetic young people an alternative method of doing business in Washington, only to fade out of sight as the primaries wore on. But then again, no one would expect Rachel Maddow to be a giggling cheerleader for Ron Paul either.