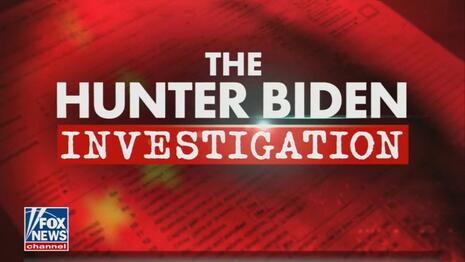 Fox News, unlike, ABC, CBS and NBC on Friday, reported on the latest scandal. Here’s Dana Perino on America’s Newsroom: “New e-mails obtained exclusively by Fox Business show Hunter Biden, along with a former aide to then-Vice President Biden invested in Chinese companies with close ties to top officials in the communist government.”

Here’s part of an e-mail sent to Hunter in 2015 by a former close adviser to Vice President Biden inviting Hunter to China. Quote, “Bo Zhang and his family would host us. They are a great family with great respect and relationships in China. They are very private and wouldn’t tell anyone about you coming. Bo’s father-in-law is actually the Governor of Hainan Provence, which he doesn’t advertise at all.”

None of the evening newscasts on Thursday or the morning shows on Friday covered this. Here’s how Fox Business broke the story on Thursday:

As recently as March 2017, Hunter Biden's private equity firm held a stake in a company run by a Chinese executive with ties to officials at some of the highest levels of the Communist Party of China, according to emails reviewed by FOX Business.

Hunter Biden’s longtime business partner, Eric Schwerin, sent him an email in March 2017 breaking down the ownership interests of Rosemont Seneca Advisors, which included a 5% stake in Harves Amusement Parks and ownership in Harves Sports and Entertainment.

This has particular relevance as the United States deals with difficult problems related to China, including COVID. On Wednesday at a rare Joe Biden press conference, Steven Nelson from the New York Post asked if Hunter’s connection to communist China was a conflict of interest.

STEVEN NELSON: Well, President Biden, on the coronavirus, we're tragically approaching nearly one million Americans who’ve died and I'd like to ask you why it is during your three and a half hour virtual summit in November with the Chinese president you didn't press for transparency and also whether that has anything to do with your son's involvement in an investment firm controlled by Chinese state-owned entities?

JOE BIDEN: The answer is that we did — I did raise the question of transparency. I spent a lot of time with him. He — the fact is they're just not being transparent.

NELSON: Transparency on the coronavirus origins?

NELSON: And you did during the virtual summit?

NELSON: Is there a reason your press staff was unaware of that and what did you say to the Chinese president?

BIDEN: And they weren't with me the entire time.

As can be seen from the transcript on Wednesday, Biden shocked everyone by, now, claiming he did press China on the origins of COVID. The White House’s story has radically changed from back in November. As I noted in a NewsBusters study this week, the networks allowed just five minutes to various Hunter Biden scandals in 2021. So far, things don’t look much better in 2022. They should do their jobs and investigate all of President's potential conflicts of interest when it comes to his son.