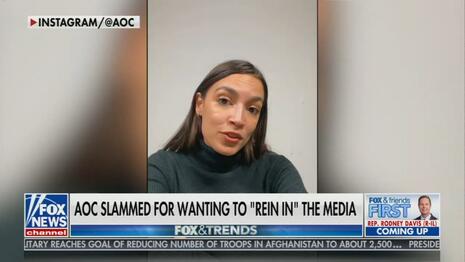 Defending the First Amendment doesn’t seem too important to journalists. Reporters and media outlets have yawned about far-left Congresswoman Alexandria Ocasio-Cortez’s call to “rein in” free speech. During a live stream, the Democratic socialist on Tuesday night offered this shocking suggestion after a viewer question on the media in the wake of the Capitol Hill riot:

I do think that several members of Congress, in some of my discussions, have brought up media literacy because that is a part of what happened here and we’re going to have to figure out how we rein in our media environment so that you can’t just spew disinformation and misinformation.

The three networks have ignored the ominous call for altering or limiting free speech by the liberal favorite.

Hill journalist Joe Concha appeared on Fox and Friends, Thursday, to hammer the little-noticed call by Ocasio-Cortez: “Let’s unpack this proposal, she wants to basically establish a Ministry of Truth, we’ve all read 1984 and, you know, to determine what is truth and what is not. So who sits on this committee exactly? Eric Swalwell? Adam Schiff? Because they seem to have some challenges when it comes to telling the truth.”

Those that scream the loudest on press freedom don’t seem to have noticed. The Democrat’s remarks didn’t make it into the Reliable Sources newsletter for Brian Stelter’s CNN show.

On Wednesday, David Harsanyi wrote in the New York Post on the creepy admission by Ocasio-Cortez:

Has anyone ever proposed a truth commission to heal the nation from those wounds?

This kind of state intrusion into discourse — on whatever level AOC envisions it — would, like all other facets of society lorded over by Congress, inevitably lead to giant rent-seeking corporations like CNN, ABC, NBC, Washington Post, The New York Times, gaining favor with government and consolidating power. The less powerful would either be left to contour their speech to please the state’s factcheckers or be branded liars. The press should challenging those in power, not obsequiously trying to earn gold stars from unelected bureaucrats on a state-run committee.
...

As for AOC’s ideas: It’s just creepy, not to mention wholly un-American, for an elected official to advocate the state as adjudicator of veracity of our political speech.

But that’s modern journalism for you: Unconcerned by encroaching attacks on freedom of the press.