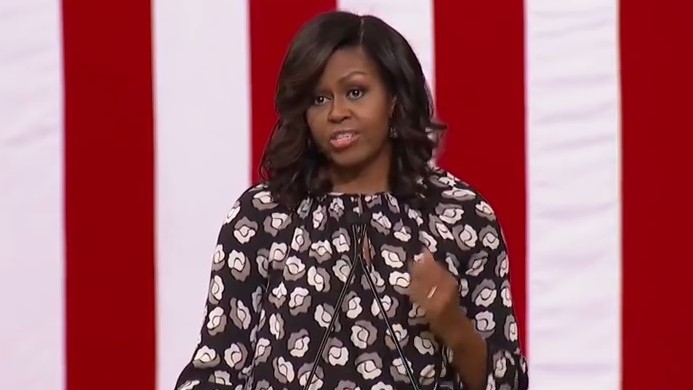 What would Thanksgiving Day be without more gushing over the Obamas? The Washington Post on Thursday declared That Michelle Obama’s “departure from the East Wing signaled the end of a singular era for American fashion.” The piece by Robin Givhan contrasts with the writer’s bashing of the looks of conservative women such as Carly Fiorina, who she mocked as a “style bully.”

Regarding Mrs. Obama, Givhan fawned, “She helped young people see that fashion is more than catwalk extravaganzas and ‘Project Runway.’"

She praised the First Lady’s fashion as a bold breakthrough and added a shot at Nancy Reagan:

She made people anticipate fashion, notice it, parse it and wonder about the folks who made it. The conversation mainly focused on aesthetics and authorship. Fashion in the Obama administration was not a source of scandal or ethics investigations, as it was during the Reagan era when the first lady was taken to task for borrowing and not returning designer fare. Obama was buying her clothes, not the taxpayers. Her first inaugural gown, the white one with its single strap and romantic embroidery, is displayed at the National Museum of American History. Other gowns were stored at the National Archives until they were recently shipped to Chicago along with boxes of other Obama administration artifacts.

Here are some of Givhan’s past partisan fashion critiques:

George W. Bush “has enough hair to fully cover his head, but it is a dull gray thatch that is unremarkable and never seems to glisten even when he is standing in direct sunlight.”

Dick Cheney “has thinning white hair, and the few strands that are there are so lacking in body and bounce that in the presidential hair wars, they don't even register as wisps.”

John Kerry’s “hair may have turned silver, but he has arrived at age 60 seemingly without having lost a strand. What man wouldn't gloat, just a little?”