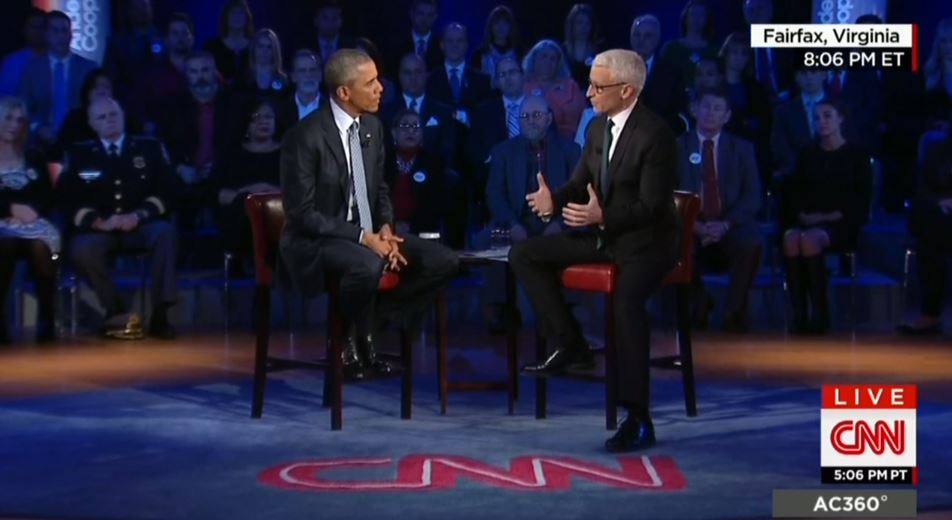 The September 16 event became the most-watched event in CNN’s history, rivaling NFL football. On December 15, another GOP debate scored 18 million viewers. According to CNN.com, it became the third-most-watched primary debate of all time.

In other words, the event lagged way behind the Republican debates. Still, Deadline Hollywood saw the Obama event as a win for CNN.

Among adults 25-54 the 8 – 9:15 PM Presidential grilling of sorts averaged 845,000 viewers. How big a deal was that for the Jeff Zucker run CNN? Well, it was a 372% rise in the news demo from what the time slot had been averaging the past four Thursdays. Even when you take the holiday season into account, that’s still a surge for CNN.

Writer Dominic Patten allowed, “Still, while The O’Reilly Factor and the first 15 minutes of The Kelly File drew 463,000 viewers in the news demo, the FNC blockbusters remained easily in first place in total viewers with an audience of 3.03 million.”

As reported by NewsBusters, Cooper pushed back at the President for suggesting opponents on guns are conspiracy theorists.