ABC's Good Morning America on Wednesday rightly highlighted the "outrage" over the delay of death benefits to the families of fallen U.S. soldiers. A day later, the program's hosts barely had time for the story, allowing a mere 28 seconds (within a larger report). Reporter Jon Karl briefly referred to the "disaster on military benefits," but he didn't explain that a private charity had stepped in to solve the problem.

On Wednesday, a graphic for a Jim Avila full report insisted that "outrage grows for America's heroes." The journalist featured a clip of Democratic Senator Patrick Leahy trashing, "And now, because of a small group of Tea Party Republicans, we say we can't even take care of your family when you die in the service of the country." On Thursday, Karl lectured that "the only thing both parties seem to agree on" is that "it's inexcusable to deny help to family members of those who have given their lives serving the country." [See video below. MP3 audio here.] It's true that the House acted 425-0 to pay the death benefits, but Harry Reid's Democratic Senate has not acted. [UPDATE: 12:48pm ET The Senate has now moved on approving benefits. SECOND UPDATE: But the White House has rejected it.]

According to the Los Angeles Times:

Defense Secretary Chuck Hagel announced that the Pentagon had reached an agreement with Fisher House Foundation, a nonprofit charity that assists military families, to begin paying the survivor benefits until the government can resume them. The foundation will be repaid after the stalemate ends.

Hagel's announcement came slightly more than an hour after the House of Representatives unanimously passed a bill, 425 to 0, to restore the benefits and sent it to the Senate. It appeared, however, that the Democratic-controlled Senate might not act on the bill after the Pentagon moved to pay the benefits through the private foundation.

If the Senate fails to act, Republicans would have a harder time claiming credit for restoring the aid to military families. 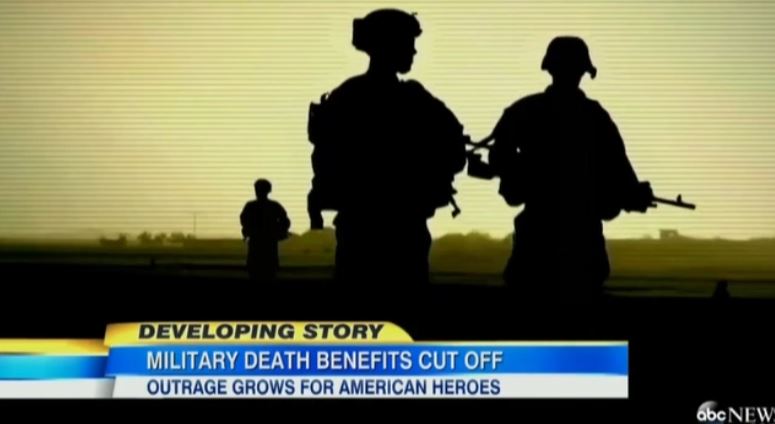 On Wednesday, Avila included a clip of Reid condemning, "Washington may be shut down, but it's still asking people to go to war."

Thursday, Karl made no mention of the Senate. Instead, he spun, "The President said he would fix this immediately."

He then featured a clip of Barack Obama asserting, "When I heard about this story, I told the Department of Defense, within our administrative powers, we should be able to get that fixed." 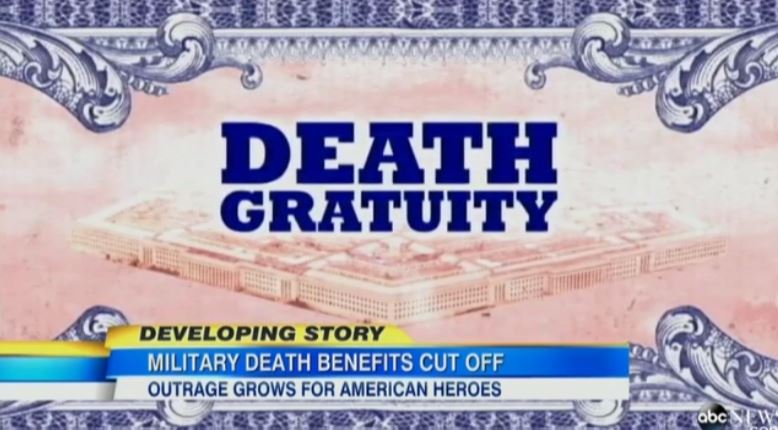 Although Avila noted that "a veterans charity called Fisher House is helping with short term funeral and travel needs for families," Karl did not.

Instead, co-host George Stephanopoulos focused on a planned short term increase of the debt ceiling. Talking to Karl, he wondered, "Will this meet the President's condition of having no conditions on it? Or are they going to try to attach conditions on that, as well?"

A transcript of the October 10 segment, which aired at 7:03am ET, follows:

GEORGE STEPHANOPOULOS: We're going to get the latest on the government shutdown in its tenth day now. And with the danger of America defaulting on its debt a week away, President Obama has congressional Republicans coming to the White House for talks. ABC's Jon Karl is there. And Jon, the White House won't call these negotiations, but is it possible we're seeing some movement towards a solution today?

JON KARL: Well, George, we may not be seeing a solution yet, but we are seeing movement. ABC News has learned that House Republican leaders are preparing a measure that would at least delay default by raising the debt ceiling for six weeks, allowing time for broader negotiations on reopening the government. There isn't much common ground anywhere in Washington right now. The President invited all 233 House Republicans to the White House today. But Republicans have decided they'll only send 18 of the party's leaders. This on the heels of a meeting the President held at the White House with House Democrats.

NANCY PELOSI: Our emphasis is onto solve the problem, open government, negotiate, and honor the full faith and credit of the United States.

KARL: It comes after the disaster on military benefits. The only thing both parties seem to agree on, it's inexcusable to deny help to family members of those who have given their lives serving the country. The shutdown has temporarily halted the $100,000 payments given to service members killed in action. The President said he would fix this immediately.

BARACK OBAMA: When I heard about this story, I told the Department of Defense, within our administrative powers, we should be able to get that fixed.

KARL: As for changes to anything else, no progress. Republicans are continuing to demand changes to ObamaCare before they agree to reopen the government.

JOHN BOEHNER: What a train wreck. How can we tax people for not buying a product from a website that doesn't work?

KARL: Treasury Secretary Jack Lew will be on Capitol Hill today, warning that if Congress doesn't raise that debt ceiling by October 17th, he won't be Able to guarantee, among other things, payments to Social Security recipients. In other words, George, those Social Security checks may not go out, if you want to see something that gets Congress to act. That would be it.

STEPHANOPOULOS: I'll bet. You mentioned the House Republicans are preparing a short-term extension of the debt ceiling. Will this meet the President's condition of having no conditions on it? Or are they going to try to attach conditions on that, as well?

KARL: I'm told they're preparing a clean debt ceiling with no conditions. But again, George, only for six weeks. And this does not include reopening the government.