On Friday’s Good Morning America, co-host George Stephanopoulos aggressively pushed Rudy Giuliani to admit that Barack Obama has "taken responsibility" for the government’s reaction to a failed Christmas Day bombing. However, when he chatted with Democratic operative, and friend, James Carville on Thursday, the ABC anchor mostly worried about the "political fallout" for the President. [Audio available here.]

After discussing the criticism for Obama’s handling of the attempted plane bombing, Stephanopoulos fussed at the former mayor, "So, bottom line right now, the President has stepped up. He's taken responsibility. He's calling it a war. Are you satisfied now with his response?" He teased the segment by declaring, "[Obama’s] taking full responsibility for the government failures in the wake of the failed Christmas Day attack."

The entire interview consisted of Stephanopoulos, a former top aide to Bill Clinton, promoting this White House "responsibility" line. He began by disputing the idea that suspect Umar Farouk Abdulmutallab has stopped talking now that he’s being tried in a civilian court. He instructed Giuliani, "But, FBI officials say they've talked to [the suspect] for over 30 hours. He's singing like a bird. He's providing usable intelligence. What's wrong with that?"

In contrast, when Stephanopoulos talked to Carville a day earlier, his questions were more strategic. And he didn’t grill his pal with GOP talking points, despite using Democratic spin to hit Giuliani. Regarding Obama’s response, the host worried, "Has the President done enough to insulate himself from the political fallout here?" He mildly asked Carville, "Should the President have suspended his vacation?"

A transcript of the January 8 segment, which aired at 7:01am EST, follows:

GEORGE STEPHANOPOULOS: In the news this morning, President Obama faces the country after that Christmas Day terror plot and he takes the blame.

BARACK OBAMA: Ultimately, the buck stops with me.

STEPHANOPOULOS: With the suspect set to appear in court today for the first time, we’ll ask Rudy Giuliani if the President is doing what he needs to do.

GEORGE STEPHANOPOULOS: President Obama saying yesterday, very clearly, we are at war with the terrorists. He’s taking full responsibility for the government failures in the wake of the failed Christmas Day attack. And we’re going to have much more on what we’re learning from his report and what his reforms may mean in a moment. 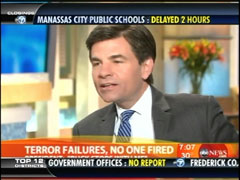 GEORGE STEPHANOPOULOS: And for more on this, we joined by former New York Mayor Rudy Giuliani.

RUDY GIULIANI: George, how are you?

STEPHANOPOULOS: Good to see you again. Let’s pick up on what Robin and Chris were just talking about, this Abdulmutallab case. You have been quite critical of the decision to interrogate him and try him in the civilian system. But, FBI officials say they've talked to him for over 30 hours. He's singing like a bird. He's providing usable intelligence. What's wrong with that?

GIULIANI: Why stop? If we've done 30 hours of questioning, right? Basically, in that first 30 hours, if it's a typical case, which it probably is, you get some valid information and you get some lies. Takes them a lot longer than 30 hours to debrief a terrorist with the kind of history that he appears to have, the kind of knowledge he appears to have. Why would you stop it? There's no reason to stop it. Particularly since the administration has created military courts. It's not as if they said- I wouldn't have as big a problem with this if the Obama administration said military courts are unconstitutional or unfair. They’re unfair. We are going to have military courts. We are going to have civilian courts. And it seems to me, we're going to be trying to most dangerous terrorists in the wrong place. The ones that attack us here in the united states.

STEPHANOPOULOS: But, under the Bush administration, those in the military tribunals, they got only three convictions in eight years. And there were several convictions in the civilian courts, including Zacarias Moussaoui, the 20th hijacker. You called that trial a symbol of American justice.

GIULIANI: It was. This isn’t about whether you convict him or not. This is whether you get information or not. If you put someone, in a civilian court, within a short period of time, a lawyer appointed, the person shows up. If you have a person in a military system, you can question him endlessly, for as long as you have to, to make sure you have the full scope of information. And here’s the most important part, you get it timely.

STEPHANOPOULOS: You don't buy they've gotten everything they can?

GIULIANI: Well, of course, they haven't. In 30 hours? Why would you get everything you can in 30 hours? And why in God’s name would you stop questioning a terrorist? Why would you put an artificial time limit in the amount of time you can question a terrorist? And this has implications way beyond this particular person. I mean, this is the way they're approaching things. And it's part of a- I'm very hopeful that President Obama turned a corner yesterday. He first used the words, thank goodness, "war on terror." Hasn't done that since he was a candidate.

STEPHANOPOULOS: He did use it throughout the campaign.

GIULIANI: He did. But once he became President, they’re going to reject war on terror. I think it was an effort to separate himself from President Bush. The reality is, whether he likes it or not, we are at war with terrorists. They haven't forgotten it. And if he recognized we're at war with terror. They're enemy combatants. They’re not just mere, domestic criminals. Then, we don’t close Guantanamo. I mean, it’s totally absurd.

STEPHANOPOULOS: He seemed to be putting it off for some time.

GIULIANI: Darn right he is. This was a criticism of Bush. It was a pure, partisan, political criticism. When you look behind it, I know people who have gone to Guantanamo. You do. People I respect, including Democrats, who tell me Guantanamo is better than half the federal prisons.

STEPHANOPOULOS: President Bush said he wanted to close it as well.

GIULIANI: Well, yeah. Because of the pressure. It wasn't that President Bush did everything right. This whole thing is like- They say, well, President Bush sent people to Yemen. He shouldn't have. Obviously, now, if he could do it again- one in five people that have been released from Guantanamo have gotten involved in terrorist activities. At least. That's what we can measure. That obviously was a mistake. What he should be doing, is following the right things that Bush did. One of the right things he did was treat this as a war on terror. We had no domestic attacks under bush. We've had one under Obama. Number two, he should correct the things that Bush didn't do right. Sending people to Yemen was wrong. Not getting this whole intelligence thing was Bush's responsibility and Obama.

STEPHANOPOULOS: So, bottom line right now, the President has stepped up. He's taken responsibility. He's calling it a war. Are you satisfied now with his response?