To Media and Left, Wartime Service Unimportant for Supreme Court 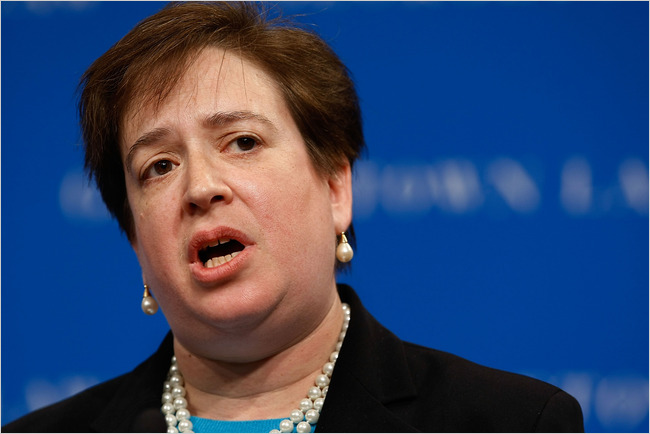 The United States is fighting two wars - in Iraq and Afghanistan - so it's natural that the nation's leaders have a solid understanding of what war is about. But President Obama's nominee for the Supreme Court has no wartime experience and if she is confirmed, that would mean no member of the highest court would have served in the military in or near combat.

This is a major shift for a nation with a proud military tradition. In the past 100 years, the United States has fought two World Wars, the Korean and Vietnam Wars and the Gulf War. American servicemen and women fought in the Philippines, Grenada, Panama, Somalia and Bosnia and many more. Given the nature of the terror threat America faces, more countries probably will likely join that list.

The three major broadcast networks have ignored this issue since Obama's May 10 nomination of Solicitor General Elena Kagan for the Supreme Court. Kagan does not have any military experience and is considered by some as anti-military. Yet, out of 17 stories on ABC, CBS and NBC since Kagan was named, not one has even mentioned the issue of wartime experience.

This, despite liberal arguments that a judge's experience is key to his or her decisions, and that the most lionized of progressive Supreme Court justices was an emphatically proud veteran of the Civil War, whose tombstone lists his war service before his court tenure.

Two current Supreme Court judges, Samuel Alito and Anthony Kennedy, have military service on their resume. Kennedy served in the National Guard "in 1961," according to his Supreme Court biography. Alito underwent Army ROTC training during the Vietnam War, and subsequently served on active duty and in the Reserves as a Signal Corps officer. Neither justice served in a combat zone.

While many in the media haven't noticed, conservatives have.

Eagle Forum founder and syndicated columnist Phyllis Schlafly explained on Townhall that, "Veterans in the U.S. Senate should make sure that such an embarrassment does not occur. Cases concerning the military appear every year before the Supreme Court, and our nation will not be well-served by a court lacking in military experience."

Schlafly pointed out that even Justice John Stevens, who is retiring, agrees wartime service is important. Stevens is currently the only justice with war experience. He is a veteran of the Navy and served in the Pacific as an intelligence officer, earning a bronze star for his part in breaking the code that led to the killing of Japan's most important naval officer. Stevens said, "Somebody was saying that there ought to be at least one person on the court who had military experience. I sort of feel that it is important. I have to confess that."

Since Stevens announced his retirement, however, CBS and NBC have failed to even mention his quite notable war service. Only ABC's "This Week" on April 11 discussed it.

To the networks, a Supreme Court full of justices without wartime experience is nothing to report on. From May 11 to 20, ABC, CBS, and NBC ran 17 stories about Kagan on the morning and evening news programs. Not once did the networks mention that if Kagan were confirmed the Supreme Court would not have any war veterans.

The lack of coverage is puzzling, because liberals tend to emphasize life experience as a qualification for members of the judiciary. When considering replacements for Justice David Souter last year, President Obama said:

"I will seek someone who understands that justice isn't about some abstract legal theory or footnote in a casebook. It's also about how our laws affect the daily realities of people's lives - whether they can make a living and care for their families, whether they feel safe in their homes and welcome in their own nation."

His eventual nominee, Sonia Sotomayor rather infamously said: "I would hope that a wise Latina woman, with the richness of her experiences, would more often than not reach a better conclusion than a white male who hasn't lived that life."

So, should Kagan be confirmed, the Supreme Court of the world's only remaining military superpower would be left without a single justice who can look beyond "some abstract legal theory" and channel "the richness of her experiences" in judging cases dealing with war.

Kagan has never served as a judge so her stance on many issues has been difficult to determine. But her record raises questions about how she views the military.

She has been serving as the Solicitor General since January 2009. A Harvard law school graduate, Kagan clerked for the U.S. Court of Appeals for the District of Columbia after graduation and later for liberal Supreme Court Justice Thurgood Marshall. She practiced as a private attorney before becoming an assistant professor at the University of Chicago Law School.

After Clinton's presidency, Kagan became a professor at Harvard Law School and eventually the school's first woman dean. It was in that position that, in defiance of the Solomon Act, she supported not allowing military recruiters on campus because of her opposition to the military's "Don't Ask, Don't Tell" policy on allowing homosexuals to serve.

Kagan stated that "Don't Ask, Don't Tell" is "a moral injustice of the first order." Perhaps, but she may have violated the law in denying military recruiters access to Harvard Law School. Further, the nation is fighting two ground wars and a Global War on Terror, encountering many difficult legal issues. Kagan denied the military the opportunity to recruit some of the nation's brightest young legal minds.

Even the broadcast networks have noticed that this may hurt her in the nomination process. On "Good Morning America" May 11 during an interview, George Stephanopolus questioned, "And Sen. Sessions, you heard Vice President Joe Biden there. He sees nothing wrong with the actions Elena Kagan took at Harvard, banning those military recruiters from campus. You called it unacceptable."

On the same day, "Today's" Savannah Guthrie stated, "She's expected to again face tough questions on her decision as Harvard dean to continue the school's ban on military recruiters in protest of the Pentagon's ‘Don't Ask, Don't Tell' policy.'"

Former Speaker of the House Newt Gringrich has not being shy about expressing his dislike of Kagan's past anti-military actions. ABC's This Week" reported him stating on May 16, "She, as dean of the Harvard Law School, took an effort to block the American military from the Harvard campus all the way to the Supreme Court, during a war. And that is an act so unbecoming an American she should be disqualified from the beginning."

Kagan's actions on "Don't Ask, Don't Tell," coupled with the impending lack of war experience on the Court, should have raised red flags - or at least interesting questions - for reporters.

Modern liberals owe their ideas about the role of empathy and experience in judging at least in some part to a man who was most influential Supreme Court Justice of the 20th century and a lionized progressive judge. In his book "Common Law," Oliver Wendell Holmes, Jr. (1841 - 1935) wrote that, "The life of the law not been logic; it has been experience."

However, the experience the "Great Dissenter" valued above all was his service in the Civil War.

Holmes served with the 20th Massachusetts Infantry Regiment. (In a twist of historical irony, given Dean Kagan's attitude toward military recruiters in Cambridge, the 20th Mass. was known as "The Harvard Regiment.") Holmes fought in some of the war's most famous and bloody battles, surviving three wounds. Eventually, he rose to the rank of Captain. Holmes also served as Brevet Colonel and aide-de-camp on the staff of Sixth Corps General Horatio Wright.

He was active in veterans groups the rest of his life, delivering several legendary speeches on the war, including an address on Memorial Day, 1884, in which he asserted that, "the generation that carried on the war has been set apart by its experience. Through our great good fortune, in our youth our hearts were touched with fire."

Evidence of the importance of his war service to Holmes can be found on his tombstone in Arlington Cemetery. "Captain and Brevet Colonel, 20th Mass. Volunteer Infantry" appears above "Justice Supreme Court of the United States."

Since the left views the progressive Holmes as a forerunner of the ideal Supreme Court Justice for liberals, wartime experience should count for something - especially at a time when U.S. troops are fighting and dying overseas.

The media, and particularly the networks, should show some curiosity about whether America's highest court can use the perspective of a former warrior in a nation at war.