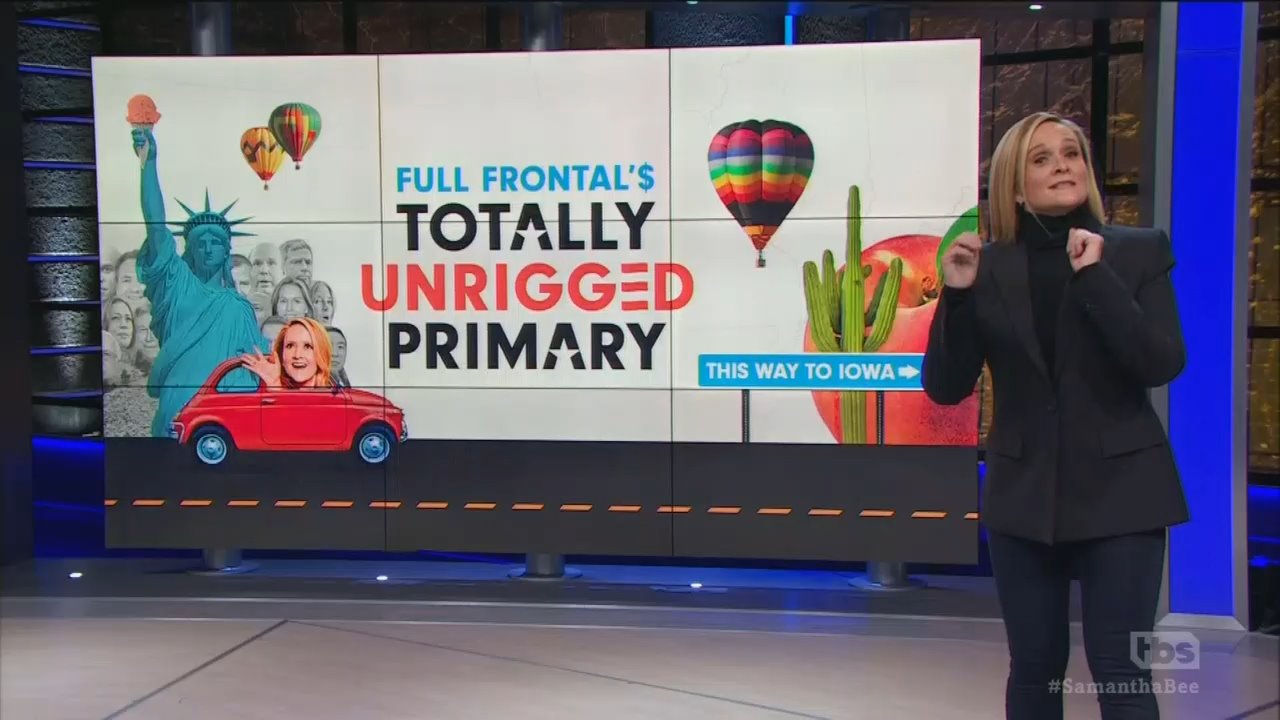 Samantha Bee isn’t content to just spew hateful rants about Republicans and fawn over Democrats. Now, she wants to actively raise money for liberals. On Wednesday, the liberal comedian devoted the second segment of Full Frontal to worrying about the “next possible Electoral College disaster” in the form of a Trump victory.

Bee appears to have channeled all of her frustration into the creation of a PAC designed to help the Democratic candidates for President, which she encouraged members of the audience to donate to.

After playing a clip of MSNBC’s Chris Jansing talking about the President’s impressive fundraising, Bee concluded that “nothing gets Trump’s elderly supporters sloppy in the dungarees like their President facing impeachment.” Bee proceeded to play a clips of another MSNBC panel talking about all of the data collected by the Trump campaign surrounding the demographics of the people who attend their rallies. Following the conclusion of the clips, the TBS host took another shot at Trump supporters by declaring that the Trump campaign’s “key demographic” is “world’s worst white people.”

All of the data cited by Bee throughout her monologue left her no choice but to proclaim “whether we like it or not, Trump is a money-making juggernaut” and “that should scare the crap out of his opponents.” According to Bee, “if any of Trump’s opponents want to beat him, they’ll need more than just cash. They will also need the support of a unified Democratic electorate.” At this point, Bee indicated her desire to “help on both of those counts” in the form of a new app called “Full Frontal’s Totally Unrigged Primary.”

Bee described the app to her audience: “All you have to do is join your favorite candidate’s team and answer questions and complete fun challenges to earn points for them as you drive the road to Iowa.” In addition, the app enables participants to “donate real money to a fund called Sam Bee’s political swear jar.” Bee promised that “when the game ends just before the Iowa caucuses in February, we will give the entire fund to the candidate whose players have earned the most points.”

As the segment came to a close, Bee put her pro-Democratic activism into high gear: “As we get closer to the election, it is super important that we all unite behind one candidate. It’s the only way to win. And this game will give us a little practice doing that.” This fundraising scheme proves once again that the line between late night comedy and Democratic politics has been completely erased.

SAMANTHA BEE: Welcome back to the show. With all this good news, it’s tempting to get complacent about the 2020 presidential election. Unfortunately, we hooked up our stupid democracy wrong when it came out of the box so upsets in state and local races don’t really tell the whole story of our next possible Electoral College disaster.

JOHN BERMAN: And we have breaking news in the race for President. A series of brand-new polls from the six battleground states that determined the outcome of the election in 2016 and could very well decide it again in 2020. It’s tight. Wicked tight.

BEE: Wasn’t that Walter Cronkite’s original sign off? “And that’s the way it is, wicked tight.” If this polling pattern holds, we could be in for a repeat of 2016; with Trump defeating the candidate who gets more votes and that’s not the only awful reason his supporters are feeling good. Impeachment might be hurting Trump with some voters but in one very important way, it’s actually helping.

CHRIS JANSING: President Trump and the RNC are touting the fact today that they have raised almost $126 million in the third quarter. The President’s campaign manager says impeachment is a big factor for why they’re burying the Democrats in fundraising. He writes “the Democrats’ reckless, illegitimate, partisan impeachment farce has his supporters even more fired up.”

BEE: Oh yeah. Nothing gets Trump’s elderly supporters sloppy in the dungarees like their President facing impeachment. While the Democratic candidates are frantically begging you to Venmo them gas money, the Republicans have more than $150 million in cash on hand. Pro-Trump committees have already spent more than a half billion dollars and he doesn’t even have an opponent yet. Half a billion dollars? Even I can’t imagine how much money that is and I have a robot butler that does sex.

BEE: Trump has even figured out a way to make money off his colossal f***ups, thanks to merchandising. Of course, campaign merchandising has a long history from “I Like Ike” buttons to Abraham Lincoln’s stovepipe onesies. But our most shameless President has taken it to a new level, turning each embarrassing gaffe into a lucrative gaffer-tunity. When he got caught doctoring a hurricane map with a Sharpie, the campaign started selling $15 packs of markers that raised $50,000. When Mick Mulvaney admitted Trump’s quid pro quo and told everyone to get over it, they sold $30 “Get Over It” shirts. And when Trump stared into the eclipse, they put out a high-powered flashlight for blinding yourself to own the libs. But all of this merch brings in something even more valuable than dollars.

MONICA ALBA: It’s not just the money, it’s the data. What are the demographics? Who are the people they can target?

STEPHANIE RUHLE: Now cross reference that, let’s say with Facebook. Now you can learn those people’s hometowns, their family, their friends; that commercial data.

BEE: That data has been immensely useful to the Trump campaign. It’s how they found out their key demographic is world’s worst white people. Trump also has sneakier ways of gathering user data. For example, he gets suckers to enter their personal info for a chance to have dinner with him. Lots of candidates run that kind of contest but in Trump’s case, there’s no evidence that anyone actually ever wins; which is pretty low. Normally to get stiffed on a promise of a free dinner, you have to be me in college, waiting for my date to show up at a restaurant. He’ll be here. I just know he will. You’ll see. Whether we like it or not, Trump is a money-making juggernaut. Yes, I was lonely in college.

BIDEN: This should scare the crap out of his opponents. I mean, sure, Biden has raised dozens of dollars with his promotional sock garters. Slogan, “when our nuts go low, our socks go high.”

BEE: But if any of Trump’s opponents want to beat him, they’ll need more than just cash. They will also need the support of a unified Democratic electorate. So, we are here to help on both of those counts with our new app, Full Frontal’s “Totally Unrigged Primary.”

BEE: Thank you. Are you looking for a way to spend more time thinking about the election? Of course not. But we made the app anyway. And it’s really fun. All you have to do is join your favorite candidate’s team and answer questions and complete fun challenges to earn points for them as you drive the road to Iowa. You can change teams at any time in case your candidate drops out or says something racist or is Tom Steyer and your points will follow you wherever you go, just like all your bad decisions in life. We’re giving away fun prizes every single day, best of all, you can even donate real money to a fund called “Sam Bee’s Political Swear Jar.” Last week, I donated $6 instead of getting my weekly upper lip wax. You are welcome, democracy. And when the game ends just before the Iowa caucuses in February, we will give the entire fund to the candidate whose players have earned the most points. Now, I know what you’re wondering. Is this legal? Well, it shouldn’t be but it is. As we get closer to the election, it is super important that we all unite behind one candidate. It’s the only way to win. And this game will give us a little practice doing that. So, text “game” to 40649 or go to the Apple or Google Play app store, download Full Frontal’s “Totally Unrigged Primary” for free and start playing today. See you on your phone. Just please try not to drop me in the toilet. We’ll be right back.