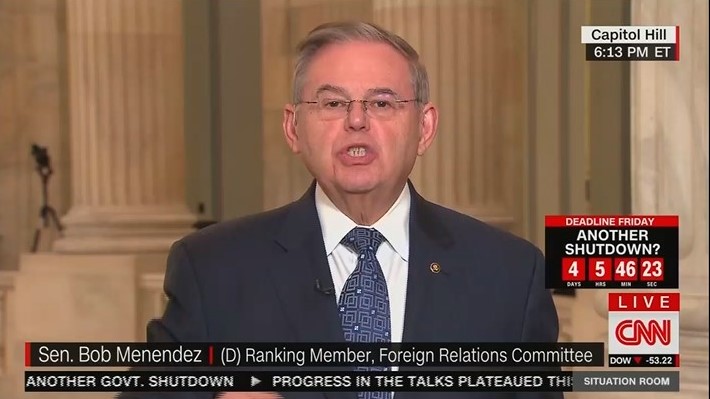 Appearing on CNN’s The Situation Room Monday, Senator Bob Menendez (D-N.J.) complained that President Trump has made everyone who decides to “cross the border undocumented” into a criminal. Menendez also complained that “if a person has a driving while under the influence violation, he is now making, saying that’s a criminal.” These bizarre statements seemed to fly right over host Wolf Blitzer’s head, as he did not push back on Menendez at all.

Menendez apparently didn’t consider the fact that American citizens face criminal charges for driving under the influence. He didn't consider it might look politically tone-deaf to downplay the immorality of drunk driving, dismissing the friends and families of people killed by drunk drivers. In 2010 in northern Virginia, an illegal immigrant with previous drunk-driving offenses plowed into a car with three nuns in it, killing one and seriously injuring another. Why did Blitzer just let Menendez give a speech?

In fairness, Blitzer did press Menendez on “the sensitive issue involving beds.” He mentioned "Going into the negotiations, as you know, Democrats wanted about 35,000 ICE detention beds. Then on Friday, they proposed a cap of less than half that number. Why did Democrats take a stand on that issue when talks seemed to be going so well?”

Menendez refused to take any responsibility for the Democrats’ decision. Instead, he began talking like a fiscal conservative; describing ICE as “out of control” and complaining that “they’re already 8,000 beds daily over their existing budget.”

Blitzer then asked Menendez to respond to the Deputy Director of ICE’s assertion that “a cap on beds” “would be ‘extremely damaging to the public safety of this country.’” Menendez did not answer the question; instead, he made the point that “the reason that they are already 8,000 over their budgeted amount, so they’re violating the budget, is because of the President’s zero tolerance policy that has turned everyone, regardless of their record, into a criminal.” At this point, Menendez made the false statement about the criminality of illegal immigrants who drive drunk.

This is hardly the first time that Menendez has benefitted from a free pass from the media. As NewsBusters has previously reported, the media barely covered the Senate’s admonishment of Menendez for “accepting gifts from a donor in exchange for promoting his interests.” The three networks devoted an astonishing 49 seconds to the story; with NBC not covering it at all.

Similarly, the media expressed little interest in a Democratic fundraiser in Puerto Rico attended by Menendez. Of the three Sunday shows, only Face the Nation bothered to mention the fundraiser; which occurred in the middle of a government shutdown. As long as the media continues to cover for Democratic politicians, the American people will have a hard time believing their pretense of objectivity.

A transcript of the relevant portion of Monday’s edition of The Situation Room is below. Click “expand” to read more.

The Situation Room With Wolf Blitzer

WOLF BLITZER: Joining us now, Senator Bob Menendez. He’s the top Democrat on the Senate Foreign Relations Committee. Senator, thanks so much for joining us.

SENATOR BOB MENENDEZ: Good to be with you, Wolf.

BLITZER: So, as you know, the President, he is continuing to call for a wall. Even if negotiators can reach a deal…and they’re working, obviously, very hard to come up with some sort of compromise…do you believe the President will accept it?

MENENDEZ: Well, it will be either he’ll accept a bipartisan compromise, the second one that has come about…we had one in December, or it will be at his doorstep to…if he rejects it, we will be in the midst of another government shutdown simply because he is recalcitrant here. So, I mean, you know, I hope we all don’t forget that the President’s insistence here is about billions of dollars towards what is an even bigger figure, $20, $25 billion, ultimately, to build a wall that he wants to build, and ultimately something that he said Mexico would pay. And Mexico’s made it very clear they never will. So it is the President’s insistence. If he cannot accept a bipartisan compromise, which I believe can, in fact, ultimately take place, then he will be responsible for doing damage to the American economy, to the American people, and to all of those federal workers and federal contractors.

BLITZER: There’s a sensitive issue involving beds. Going into the negotiations, as you know, Democrats wanted about 35,000 ICE detention beds. Then on Friday, they proposed a cap of less than half that number. Why did Democrats take a stand on that issue when talks seemed to be going so well?

MENENDEZ: Well, Wolf, in a negotiation is exactly that, a negotiation. All we have heard is what the administration wants. The problem here is that ICE is out of control. They’re already 8,000 beds daily over their existing budget. They want the Congress to bail them out for violating the budget that already exists. So, the bottom line is that we cannot go on a path in which ICE and the Border and Customs Department is already bigger than all of the other federal law enforcement entities together, FBI, Secret Service, Alcohol, Tobacco, and Firearm. And that’s because the President has decided to criminalize everybody who is an undocumented immigrant, even when he uses them at his luxurious country clubs and properties to make profit.

BLITZER: The Deputy Director of ICE says a cap on beds, in his words, would be “extremely damaging to the public safety of this country.” How do you respond?

MENENDEZ: The reason that they are already 8,000 over their budgeted amount, so they’re violating the budget, is because of the President’s zero tolerance policy that has turned everyone, regardless of their record, into a criminal. For example, if you cross the border undocumented, he has now made you a criminal. He is creating that problem by turning people away who legitimately seek asylum. If a person has a driving while under the influence violation, he is now making that, saying that that’s a criminal.

What we have seen in the past under, for example, President Obama, that violent criminals, yes, we want to see those persons not only arrested and detained, we want to see them deported. But at the end of the day, because he tears children away from their mothers and puts them all in detention facilities, he has an over-demand as a result of his policy. So it’s his policy that’s driving this. No one who is a real criminal at the end of the day, anyone is going to advocate for them to be let go. No, they need to be detained, they need to be arrested and they need to be deported. But that’s different than what we’re talking about and what’s driving this demand for beds. It’s his demand to take everybody. Look, I had a grandfather from New Jersey who’s been here over 20 years; works hard, never had a criminal record. They wanted to deport him. They wanted to detain him. That’s not the essence of brothers and sisters, mothers and fathers who otherwise have been law-abiding in every other respect. He wants to incarcerate them as well as he seeks to deport them. It’s far different than criminal aliens.

BLITZER: But if the government does wind up shutting down once again, will Democrats share the blame if they insist on this issue of a limit on beds?

BLITZER: They’re working really hard on it right now. Let’s hope these…the bicameral, bipartisan negotiators can come up with a deal.  Senator, I want to turn to the Russia investigation right now. The House Intelligence Committee Chairman, Adam Schiff, says he’s concerned that the Special Counsel, Robert Mueller, might not be pursuing the question of money laundering as far as the President is concerned hard enough.