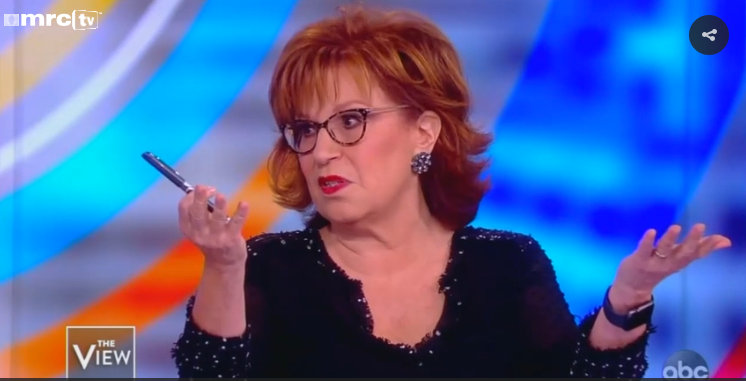 During Thursday’s edition of The View, the panel reacted to a clip of Wednesday’s Tucker Carlson Tonight, where the eponymous host pointed to studies showing that “when men make less money than women, women generally don’t want to marry them.” As a whole, the panel seemed dismissive of his argument, saying his arguments came from “loony town” and seamed “real nutty.”

Carlson’s comments were part of a lengthy monologue that addressed a wide variety of topics, including the decline of manufacturing jobs, a male-dominated industry; which occurred in tandem with schools and hospitals, female-dominated industries remaining in place. Carlson went on to point out that men making less money leads to higher out-of-wedlock birthrates and “all of the disasters that inevitably follow.”

Co-host Joy Behar mocked Carlson’s analysis, saying “it’s like...when they blamed women for pregnancy as if he had nothing to do with it.” Co-host Abby Hunstman, who once worked with Carlson at Fox News, argued that his commentary was out of character but stressed that “if you know Tucker personally, you would say he has a heart of gold.” Behar disagreed: “I don’t see what good that is when he’s promoting this bad stuff to millions of people.”

After co-host Meghan McCain expressed her confusion regarding the segment while agreeing with Huntsman that “it was a pleasure working with Tucker Carlson” during her time at Fox News, Behar argued that Carlson’s comments come as part of a sinister effort to “keep women down.”

Co-host Sunny Hostin argued that Carlson’s comments “looked like loony town” and described him as “real nutty” while admitting, perhaps unintentionally that the premise of his argument was not “real nutty” after all: “I have had friends that make a lot of money and don’t necessarily want to marry a guy that isn’t ambitious and don’t want to…that don’t make a lot of money.”

At this point, Huntsman jumped in and asked “how can you be a feminist?” After all, according to the sacrosanct feminist orthodoxy that a majority of the View panelists subscribe to, women should be independent and not rely on a man for financial security. Rather than answer the question, Hostin complained that “in the U.S, women still make so much less money than men. And so in this country and especially and black women earn 63 cents to every dollar a white man makes.”

The conversation concluded with Behar suggesting that men resent women for making more money than them because “their egos are involved” and co-host Whoopi Goldberg argued that men feel resentful because “they’ve been raised a certain way to believe that they’re supposed to be the bread winners.”  The conversation on Thursday’s edition of The View made it perfectly clear that Carlson had it right when he described the show as a “font of liberal propaganda.”

On a lighter note, Goldberg made a comment about relationships that people on all sides of the aisle should agree with: “It wasn’t about how much money they were making. I generally married somebody if I liked them.”

WHOOPI GOLDBERG: A lot of Americans also think that women making more money in the workplace is a good thing, but Tucker Carlson kind of said he didn’t think so. Take a look.

TUCKER CARLSON: Study after study has shown that when men make less than women, women generally don’t want to marry them. Now maybe they should want to marry them but they don’t. Over big populations, this causes a drop in marriage, a spike in out of wedlock births and all the familiar disasters that inevitably follow; more drug and alcohol abuse, higher incarceration rates, fewer families formed in the next generation.

JOY BEHAR: It’s like, you know…you know, it reminds me, it reminds me of when they blamed women for pregnancy as if he had nothing to do with it, you know? She’s pregnant because of her, not him.

SUNNY HOSTIN: There’s a woman in the audience, she’s like, what? What?

HOSTIN: See with the orange dress.

GOLDBERG: His initial claim that women…let’s start with the fact that he says women don’t want to be with men who make less than them.

BEHAR:  Well, everybody I know, all the women I know practically all make more money than their husbands.

ABBY HUNSTMAN: I’d be thrilled to make more than my husband. I will say this before we get into that topic because I anchored a show with Tucker. I sat at a table just like I do with you ladies and this goes…this is so different than the Tucker that I know, anyone that’s worked closely with him. Like, he was so supportive of my career and wanted me to succeed. He’s also a big proponent of marriage and families. That is probably the biggest thing for him, but he was always great to anyone he worked with; people of different backgrounds, immigrants. He loved helping them out. So if you know Tucker personally, you would say he has a heart of gold.

BEHAR: I don’t see what good that is when he’s promoting this bad stuff to millions of people.

HUNTSMAN: I’m just saying it goes against the person that I know.

HOSTIN: Is he just…he’s just doing this for ratings and theatre and…

MCCAIN: If you watch the whole clip which I did, it was like a…kind of, because I watched it a few times. It’s like kind of a convoluted way of talking about big government versus small government and like the role of economics. But I, the messaging on this is confusing to me because is the patriarchy in charge and men are controlling everything, are we as women controlling everything because we’re making so much money? Like, all the messages are confusing and I didn’t, I didn’t follow this clip at all.

MCCAIN: I will say that I…it was a pleasure working with Tucker Carlson on my behalf as well.

BEHAR: I think that there’s this idea that, you know, to keep women down that’s going on in the country…

HUNTSMAN: But Sunny you said you had friends…

BEHAR: …this is another aspect of it.

HOSTIN: I don’t know, it looked like loony town to me. But I will say this…yeah, he seemed real nutty to me.

HUNTSMAN: But Sunny you said you had friends that wouldn’t…didn’t want to marry men that made less than them.

HUNTSMAN: How can you be a feminist…

HOSTIN: When I was…when I did some research, what was interesting to me is that in 40 percent of households, American households, women are the primary bread winner, and 37 percent outearn their partners and 63 percent in those households are single moms, yet in the U.S, women still make so much less money than men. And so in this country and especially and black women earn 63 cents to every dollar a white man makes.

BEHAR: He doesn’t want to talk about that.

HOSTIN: So we have real problems in this country when women, single moms are the bread winners, yet we still are making so much less money than them.

GOLDBERG: Well, I have to tell you…

GOLDBERG: …having been on both sides of this, made more and made less, that wasn’t why I married somebody.

GOLDBERG: It wasn’t about how much money they were making. I generally married somebody if I liked them.

GOLDBERG: You know…so, I think this idea…you’re entitled to want the person you’re with, whether it’s a man or a woman, to achieve their best selves. Now, what you can’t do, which I’ve had done to me, is you can’t be mad at that person because they are making more money than you, and you can’t demean them for making more money than you. You can’t blame them because you’re not making as much money as you’re, as she’s making. You can’t be pissed at her about that.

BEHAR: Their egos are involved.

MCCAIN: Did that happen to you?

GOLDBERG: …you know, men fight it. They don’t want to feel like this, but they’ve been raised a certain way to believe that they’re supposed to be the bread winners.

HOSTIN: The pressures of society…

GOLDBERG: And so there’s all kinds of craziness out there that makes people do and say things that are really kind of questionable. So I just say everybody, if you love somebody and want to get married, damn it, get married. If you’re making some money, share with your partner. Keep your separate money though.

MCCAIN: Separate bank accounts is the key to everything.