Wow: Behar Gets MASSIVE Blowback After Trashing Fox News on The View 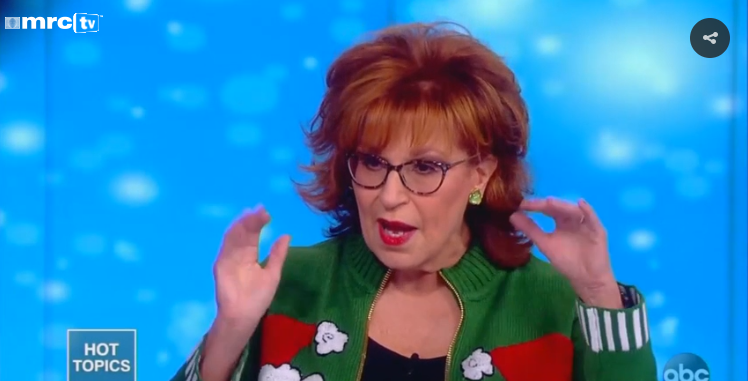 During Tuesday’s edition of The View, co-host Joy Behar described President Trump as “the only President who has his own TV channel in history,” adding “Nixon didn’t have it, so he has Fox News and Fox will just back him up.”  Not surprisingly, two of the other co-hosts on The View, who once worked at Fox News, strongly objected to Behar’s characterization of the network as a pro-Trump echo chamber.

Co-host Abby Huntsman, who formerly co-hosted Fox & Friends Weekend, interrupted Behar, urging her to “be careful about that” but Behar insisted on finishing her thought: “his failure as a President means their failure as a station. So they have everything invested in propping him up and backing his lies.”

Huntsman pushed back, asking Behar if she watched the President’s interview with Fox News Sunday host Chris Wallace, to which she replied “some of it.” Huntsman asked Behar if she thought there were some “hard-hitting questions there,” Behar didn’t really answer her question, only replying with a barely audible “yeah.”

Huntsman continued: “There are a number of folks there that very much push back on him that are not in his camp, that are great journalists.” Co-host Meghan McCain, who formerly co-hosted the Fox News program Outnumbered, began listing off some names of such journalists at Fox who push back on President Trump, including non-conservative Shepard Smith.

Even after the two Fox alumni on The View panel highlighted all of the journalists at Fox News who push back on President Trump, Behar complained “but there are plenty who don’t,” adding that the Fox base “watches the ones that do not push back at him.” Co-host Sunny Hostin concluded the unexpected anti-Fox News tangent by saying “I think that’s why they get so much access to the President because he knows that it’s a friendly place.”

Most of the opening segment on The View Tuesday focused on the latest developments in the Mueller investigation, with most of the panelists optimistic that a “smoking gun” remained imminent. The words “obstruction” and “treason” came up at least once in the course of the conversation. The Fox News tirade came out of absolutely nowhere; Behar brought it up when co-host Whoopi Goldberg asked her to respond to “some speculation that one person who may not be impacted by the Mueller investigation is the guy in the White House.”

A transcript of the relevant portion of Tuesday’s edition of The View is below. Click “expand” to read more.

WHOOPI GOLDBERG: But according to this morning’s headlines, it’s Mueller time, any minute. Any minute now, he’s set to drop some new details about the Russian investigation, you-know-who tweeted that his former fixer Michael Cohen should have the book thrown at him and prosecutors are expected to recommend jail time for his onetime National Security Adviser Michael Flynn. So what do y’all think is going down?

SUNNY HOSTIN: I think what’s going to be interesting is Mueller’s been so tight lipped about the investigation and the scope of the investigation. So this is the first time that we get a peek into the exact scope, what…how people are cooperating, what they told, you know, federal investigators. And so I think that’s going to be pretty interesting because all the judges prior to sentencing are asking for information. And so they have to provide that information today. So, it will really be a peek. And we’ll see how methodical he’s being because he’s getting all the lower level people, right? So, and that’s how you do it. You get the lower level people, then you get the mid-level people and you’re not even talking to the targets. You’re just investigating the targets and what’s also interesting to me is, you know, Roger Stone says I’ll never flip on Trump and I don’t have anything to say and I think George Stephanopoulos asked him, you know, have you been asked to cooperate with the government and he said no. And I was thinking you’re the target. You know, so I thought that was odd that he hasn’t been even asked to talk.

JOY BEHAR: So what do you make of that? What…he’s the one they’re after?

HOSTIN: Yeah because you’re not talking…you’re talking to the lower level people, you’re building your case and then the folks at the top, you’re not necessarily…

GOLDBERG: Why say I’ll never flip on Trump? You know, there’s certain verbiage, you know, sort of would prick my ears up.

GOLDBERG: Because if you say I’ll never flip on Trump, it’s like, well what do you mean you’d never flip on…What would you flip on him about? What are you talking about?

HOSTIN: He said I will never testify against Trump.

BEHAR: Because the thought of being in, you know, in prison, you know, is really a horrible idea. Let’s face it.

GOLDBERG: Prison is no fun.

BEHAR: Yeah and they don’t want to do it. And you know, Manafort is old now. I mean, he’s older than me almost. Is anyone older than me in this world? But I mean he’s going to spend his…the last few years of his life in prison. And then Cohen is young and he has kids and…no.

HUNTSMAN: I don’t know, these three guys, Michael Flynn, Paul Manafort, Michael Cohen, I’ve said this before, these are not good guys. They’ve got a past that could very well…

BEHAR: But he only picks the best people.

HUNTSMAN: Well, Michael Cohen until now he’s weak and he’s stupid, but he relied on him for his most precious dealings. If anyone can survive this, it’s President Trump. I mean, time and time again, we have seen him go through moments…the Access Hollywood video, I thought for sure that was going to take him down. Stormy Daniels, who knows where that ends, but as of right now he actually has the upper hand. It sounds like they may…Stormy’s team may have to pay his lawyers.

GOLDBERG: We’ll see how treason sits with people. I don’t think treason is going to sit well with people.

BEHAR: Well, we’ve seen it already. We saw it in Helsinki.

HUNTSMAN: Are we not allowed to say it anymore?

HOSTIN: We’ll get a peek today, I think.

HUNTSMAN: But what if there isn’t that smoking…I’ll say it…smoking gun at the end. What if there isn’t…we don’t know because there may not be a direct link between these guys that gets President Trump behind bars.

HOSTIN: We’re not going to see that today.

BEHAR: But don’t we all…

HUNTSMAN: No, I’m just saying, we don’t know, it may never even end up there.

BEHAR: Don’t we already know that he gave Michael Cohen permission to pay hush money to that McDonald woman and also Stormy Daniels? He actually was in that whole…

HOSTIN: …which was arguably a campaign finance regulation.

GOLDBERG: I think that people want…

BEHAR: …that he violated.

GOLDBERG: …you know, that concrete. I think they want concrete.

BEHAR: Yeah, and Cohen would tape a lot of stuff. Let’s not forget that he was very much the compulsive taper. So there’s your smoking flute.

GOLDBERG: Flute. You know, there’s some speculation that one person who may not be impacted by the Mueller investigation is the guy in the White House. And this could be bad news for folks. What do you think?

BEHAR: Well, here’s what I think. I was just going to say one thing about it. He is the only President who has his own TV channel in history. Nixon didn’t have it so he has Fox News and Fox will just back him up because his…

HUNTSMAN: I would be careful about that though because…

BEHAR: Well, let me finish the thought. His failure as a President means their failure as a station. So they have everything invested in propping him up and backing his lies. So that is a very, very unusual position for somebody to be in.

HUNTSMAN: Did you watch the Chris Wallace interview with President Trump a few weeks ago?

BEHAR: Some of it.

HUNTSMAN: Did you think that there were some hard-hitting questions there?

HUNTSMAN: Because that was Fox News. I mean, there are a number of folks there that very much push back on him and are not in his camp that are great journalists.

MCCAIN: Bret Baier, Kennedy, Harris Faulkner, Shep Smith, I could go on and on and on. There are a lot of great people at Fox News.

BEHAR: But there are plenty who don’t.

MCCAIN: But there’s a lot that are.

BEHAR: The overall position, I think, the Fox…

HUNTSMAN: You could talk about every network.

BEHAR: Fox base watches the ones that do not push back at him.

HOSTIN: I think that’s why they get so much access to the President because he knows that it’s a friendly place.BEHAR: Yeah. HOSTIN: But I also, I think what’s also interesting is that Trump is tweeting out all of this stuff and, you know, obstruction of justice is tampering with a witness and that’s a federal crime. So when he’s sort of, you know, issuing these… BEHAR: He’s walking a very thin line with those tweets. HOSTIN: …veiled threats…he is giving Mueller even more ammunition because, again, it’s a federal crime to say, you know, if, you know, you don’t need to testify or you should testify or that guy is really cool because he’s not testifying. I haven’t forgotten about my pardon power. All that kind of stuff is sort of, you know, whistling, dog whistling to these witnesses. It’s really inappropriate. GOLDBERG: And it’s on there. You know, you can’t say that it’s fake because well, he says it anyway but it…BEHAR: It’s almost like, it’s almost like because he says it out loud people don’t take it seriously. If they had uncovered this conversation about Helsinki, for example, when he took the word of Putin over his CIA, if they had uncovered that, it would be treasonous but because he says it on TV, everybody’s like, oh, whatever. HUNTSMAN: I think one of the biggest issues he could face is one of his kids getting in real trouble. And the next question is do you stay in office if Don Jr. is really charged with something?