The late talk radio star Rush Limbaugh coined the phrase “Gorbasm” for the ecstasy that many reporters felt when covering Soviet dictator Mikhail Gorbachev, who died at age 91 on Tuesday. It’s true that Gorbachev was obviously less brutal than previous communist rulers. But his Soviet Union was hardly an enlightened, peace-loving democracy. While Gorbachev relaxed the repression of previous years, he did not shut down the Gulag, allow a free press, or permit the free expression of religion.

When the Baltic republics pushed for sovereignty in early 1991, Moscow’s Brezhnev-esque response was to use tanks to suppress pro-democracy forces in Lithuania and Latvia, killing eighteen.

Yet journalists elevated Gorbachev far above the freedom fighters, dissidents and democratic, anti-communist leaders like Ronald Reagan and Margaret Thatcher; indeed, the media assigned the Soviet party boss nearly all of the credit for ending the Cold War. Time magazine thought it insufficient to name him merely the “Man of the Year,” so in 1990 Gorbachev became their “Man of the Decade.” 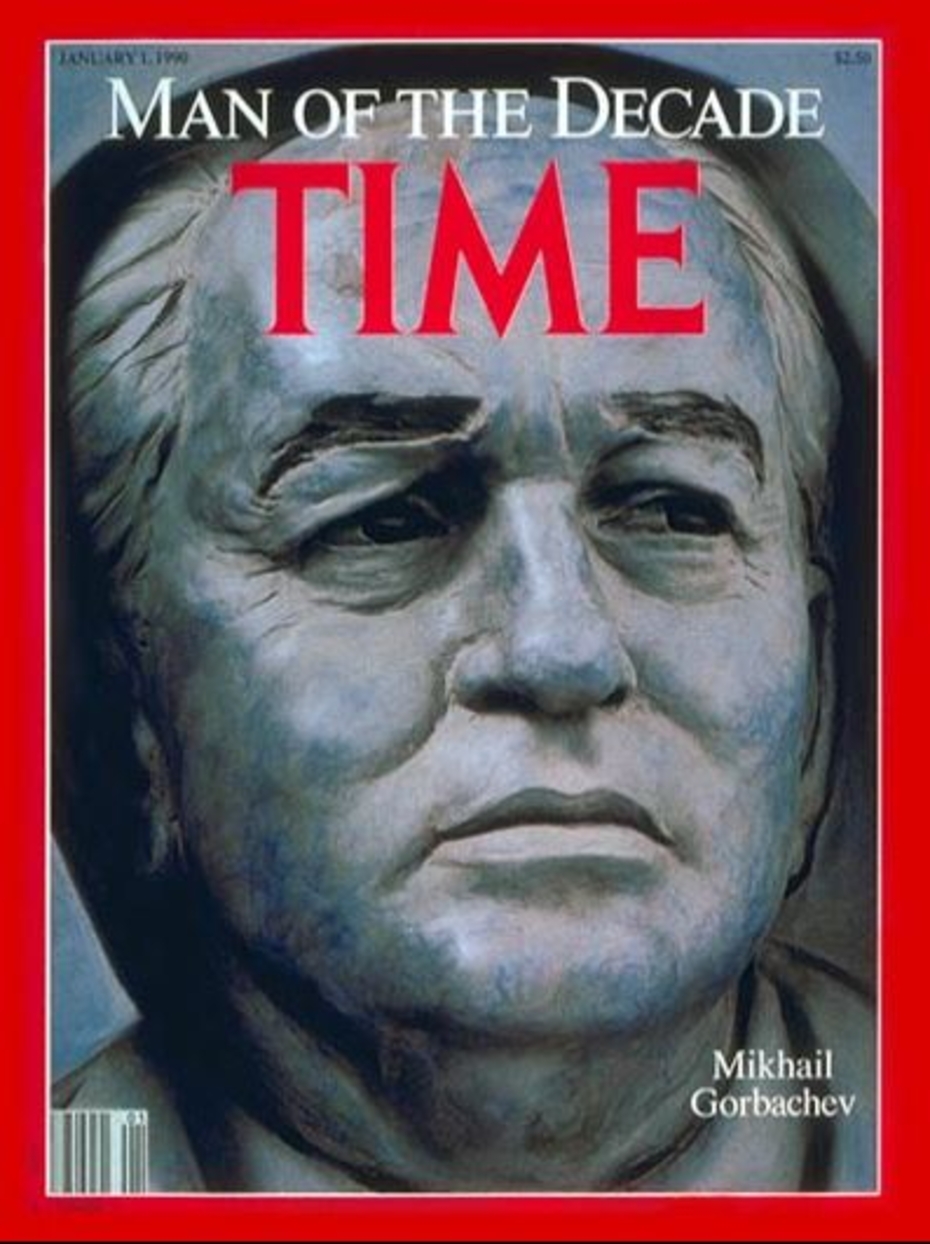 Few, if any, democratic politicians have ever received the plaudits that were flung by journalists towards the last dictator of the Soviet Union. What follows is a video compilation of the most fawning television quotes, followed by the text of those and many print quotes, all drawn from the MRC’s archives.

■ “Mikhail Sergeyevich Gorbachev is the man who now stands second to none atop Lenin’s Mausoleum every May Day....As cosmopolitan as Peter the Great....A great communicator like [Ronald Reagan] the man in the White House....More polished than Nikita Khrushchev, but just as much the populist reformer....We probably won’t see the last of him until well into the next century."
— Correspondent Richard Threlkeld profiling Gorbachev on ABC’s World News Tonight, November 4, 1985.

■ “Gorbachev is the symbol of democracy around the world.”
— Newsweek reporter Eleanor Clift on The McLaughlin Group, May 20,1989.

■ “The supreme leader of an atheistic state was baptized as a child. Now, in a sense, Gorbachev means to accomplish the salvation of an entire society that has gone astray....Much more than that, Gorbachev is a visionary enacting a range of complex and sometimes contradictory roles. He is simultaneously the communist Pope and the Soviet Martin Luther, the apparatchik as Magellan and McLuhan. The Man of the Decade is a global navigator.”
— Time Senior Writer Lance Morrow naming Gorbachev the “Man of the Decade," January 1, 1990.

■ “Gorbachev has probably moved more quickly than any person in the history of the world. Moving faster than Jesus Christ did.”
— CNN founder Ted Turner, “TV chieftain with an outspoken conscience,” in the January 22, 1990 Time.

■ “He has, as many great leaders have, impressive eyes...There’s a kind of laser-beam stare, a forced quality, you get from Gorbachev that does not come across as something peaceful within himself. It’s the look of a kind of human volcano, or he’d probably like to describe it as a human nuclear energy plant.”
— CBS anchor Dan Rather on Mikhail Gorbachev, as quoted in the May 10,1990 Seattle Times.

■ “He seems to me to have done more good in the world than any other national leader of my lifetime.”
— Moscow reporter Bob Abernethy on the December 24, 1991 NBC Nightly News.

■ “The Nobel Prize he received for ending the Cold War was well deserved. Every man, woman and child in this country should be eternally grateful. His statue should stand in the center of every east European capital....No Russian has done more to free his people from bondage since Alexander II who freed the serfs.”
— Boston Globe Senior Associate Editor H.D.S. Greenway in a December 27, 1991 column.

■ “What do you do for an encore after ending the Cold War and reversing the arms race? How about saving the planet? That’s the latest assignment for Mikhail Gorbachev, having assumed the presidency of the International Green Cross, a new environmental organization...”
— Time’s “The Week” section, May 3, 1993.

■ “He can still light up any room that he walks into. The eyes are flashy, you know, and the great command of the language and the feel that he has, the very physical presence of him. It’s still fun to be around him.”
— NBC Nightly News anchor Tom Brokaw on PBS’s Charlie Rose, May 2, 1996.

■ “Perhaps one day again we’ll see you in political office in Russia. We know that you’ve devoted your life to peace and to changing your country and those of us who have gotten to know you count ourselves among the privileged.”
— Tom Brokaw closing his October 29, 1996 MSNBC InterNight interview with Gorbachev.

■ “As the former head of the Soviet Union, Mikhail Gorbachev was widely hailed as the man who brought an end to the Cold War....”
— CBS’s Bryant Gumbel setting up an interview of Gorbachev on the May 1, 2000 Early Show.

■ “He’s only the most important political leader alive in the world today, historically speaking....If you look over the course of our lifetimes, who was the most, well, you go back to Lincoln and Franklin Roosevelt....If I look back over my lifetime, who is the world leader who changed things the most, and I don’t actually think it is a close call.”
— Newsweek’s Jonathan Alter on Gorbachev, April 27, 2001 Imus in the Morning on MSNBC.

■ “With a Western-style politician’s charm and a homey touch, he became, as Time put it, ‘a symbol of hope for a new kind of Soviet Union: more open, more concerned with the welfare of its citizens and less with the spread of its ideology and system abroad.’ What did spread, at home and abroad, was a fever of democratic reform."
— Time in its double-issue dated Dec. 31, 2001/Jan. 7, 2002, explaining why it selected the former Soviet dictator as "Man of the Year" in 1987 and 1989.

■ “As far as Reagan’s much-vaunted role in winning the Cold War, the lion’s share of credit goes to Mikhail Gorbachev — a true visionary and, it turns out, the real democrat.”
— Oliver Stone narrating the December 31, 2012 installment of Showtime’s ten-part Oliver Stone’s Untold History of the United States.