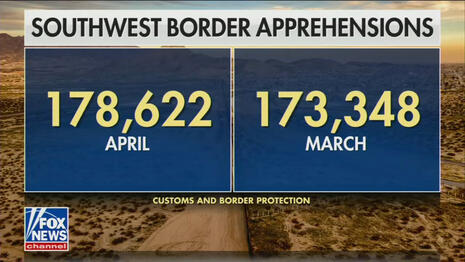 New numbers show the crisis at the U.S. southern border actually worsened in April, but the ABC, CBS and NBC evening newscasts have drastically cut back on their coverage of the Biden administration’s ongoing debacle.

In April, the number of encounters at the Southwest border region, as reported by U.S. Customs and Border Protection was 178,622, an increase from the then-record-breaking 173,348 in March. The number of unaccompanied children intercepted in April was a still-high 17,171, compared to 18,960 in March.

Earlier this week, the Associated Press reported that “the number of migrant children in government custody more than doubled in the past two months....Attorneys, advocates and mental health experts say that while some shelters are safe and provide adequate care, others are endangering children’s health and safety.” 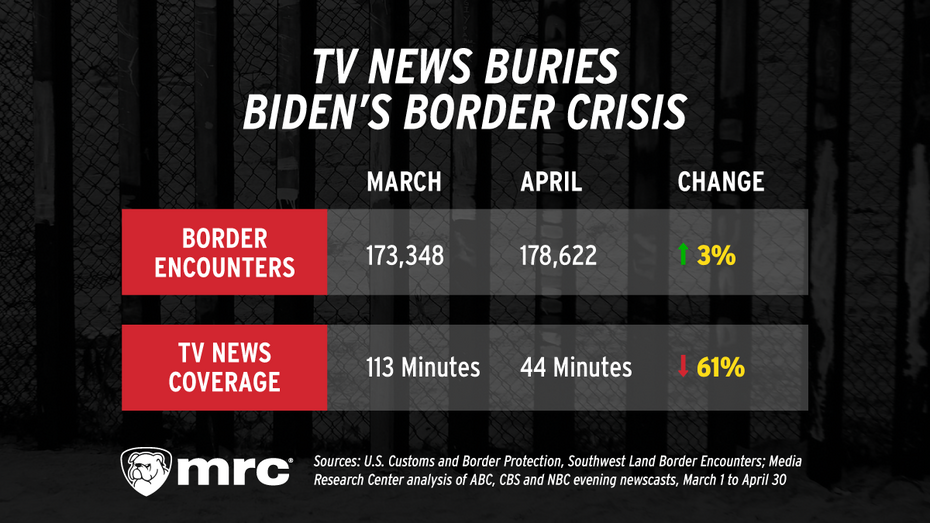 Yet even as the situation remained dire, coverage on the ABC, CBS and NBC evening newscasts fell by more than 60%, from 113 minutes of airtime in March to just under 44 minutes in April. And our analysis shows the minuscule news coverage isn’t the only favor the liberal networks are doing for the White House:

■ Barely Blaming Biden: President Biden and his policies were completely shielded from blame in a majority (48) of the 88 stories aired during these two months, as less than one-third (26) included any reference by the reporter that the surge had anything to do with Biden. Another 14 stories included soundbites from Republicans making this point, but without any confirmation from the correspondent.

Instead, viewers heard how the President was “facing a challenge at the Southern border” (NBC’s Lester Holt, March 23), as if it was a hurricane or other natural phenomenon. On a handful of occasions, the acknowledgment of Biden as the cause was even dressed up as a good thing. 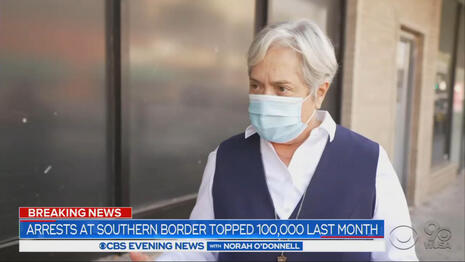 On the March 17 CBS Evening News, for example, correspondent Mireya Villarreal asked a nun “what makes this time so different than previous years?” Sister Norma Pimental responded: “The fact that we have a President, an administration, that is very open to respond in a very caring, compassionate and a very respectful way to human life.” 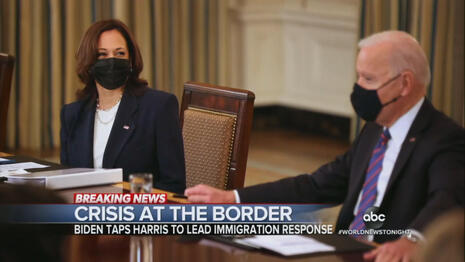 “The President saying, ‘when she speaks, she speaks for me,’” ABC anchor David Muir helpfully added on World News Tonight.

Yet in the six weeks since that night, Harris has made no trips to the border, nor has she announced any significant policy steps to stem the crisis. Her failure to do much of anything, however, hasn’t been relayed to the viewers of the CBS Evening News and NBC Nightly News, while ABC’s World News Tonight offered a scant two sentences on a Sunday night broadcast back on April 11. Reporter Elizabeth Schulze: “President Biden has named Vice President Kamala Harris to lead the effort to stem the flow of migrants from the border. She has yet to make a visit there or make any policy announcements.”

■ Who Cares If Biden Won’t Say Anything? In his April 28 laundry-list speech to Congress, Biden ignored the dire situation at the border while making a generic plea for “comprehensive immigration reform.” Biden’s refusal to talk about the crisis drew a public rebuke from another Democrat, freshman Senator Mark Kelly from Arizona, who said in a statement: “While I share President Biden’s urgency in fixing our broken immigration system, what I didn’t hear tonight was a plan to address the immediate crisis at the border.” 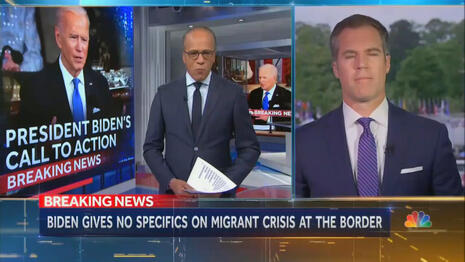 But not even criticism from a fellow Democrat could stir either ABC or CBS to offer up a peep of coverage, as both networks overlooked the omission in their speech coverage the next evening. For its part, the NBC Nightly News managed a mere ten seconds from reporter Peter Alexander: “One glaring omission in the address, no specifics on handling the crisis at the border, with more than 23,000 unaccompanied migrant children still in U.S. custody tonight.”

■ CBS Won’t Even Mention Their Bad News Poll. In advance of the President’s 100th day in office, CBS News polled more than 2,500 adults. Among major issues polled, the public’s worst reviews (57% disapproval) came on Biden’s handling of illegal immigration. Yet while that negative finding was excluded from CBS Evening News coverage of that poll, the broadcast did find it worthwhile to include the 85% positive reviews found by a snap poll of 943 adults who watched Biden’s speech to Congress a few days later — a sample that included three times more Democrats than Republicans (54% vs. 18%).

For the past four years, the media patted themselves on the back for courageously standing up to the President, “speaking truth to power.” After four months of the Biden administration, it doesn’t seem as if the same rules apply when the President is a liberal Democrat.